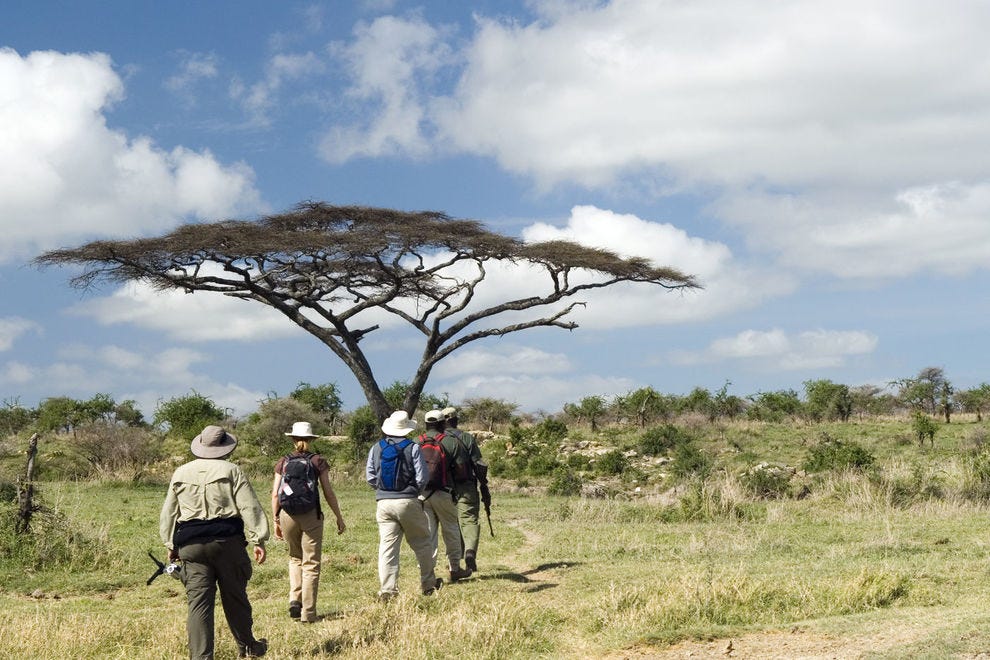 “You’ll find a walking safari brings your attention to things you wouldn’t notice on a game drive; the details, the animal tracks, scat, as well as medicinal uses for common plants,” my bushcamp watchman tells me as I finish up a bowl of creamy, African oat porridge and prepare for my second day of safari in Zambia’s South Luangwa National Park. Today, though, I’m walking.

An hour later and I’m leaving straight from Bilimungwe bushcamp, part of The Bushcamp Company’s collection of six intimate, tented camps within the national park. The company offers traditional jeep drives, but also guided walks, an ode to the style of safari which evolved in South Luangwa in the 1950s.

On a five-day trip, my travel group chose to combine the two safari styles – it’s often difficult to spot big game when walking – the focus being on the wildlife that’s typically overlooked: birds, insects, trees and flowers. So we arrange our khaki-clad selves into a single file line behind a guide and an armed guard, then we begin. One-by-one, discreet as possible, tuning into our senses. 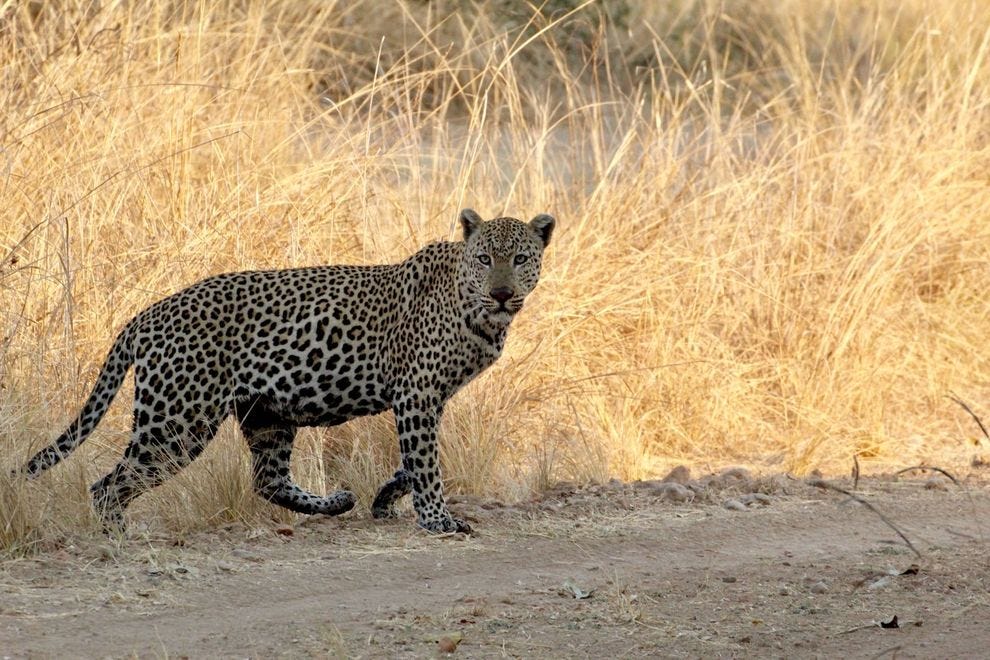 Though game sightings are rare by foot, jeep drives ensure the African wildlife spottings you came for — Photo courtesy of Jillian Dara

Our safari guide is Fannuel Banda. The local Mfuwe expert grew up in the Zambian bush, and for the past 14 years, Banda has been leading safaris at The Bushcamp Company. He shares, “Walking safaris are a completely unique opportunity to experience a special connection with nature, for people to fully understand how nature works, and to exercise all their senses.”

This becomes immediately clear as I begin to smell the pronounced wafts of scattered elephant dung and intermittent jasmine blossoms (giraffes and elephants simply love these), but also the less perceptible scents like wild mint.

Banda stops and plucks a sprig of the prickly, oblong bud, asking us to identify it by scent; it looks nothing like the flat, green leaf mint I’d find at home but sure smells like it. Banda says, “It clears your sinuses,” explaining that locals also use wild mint to cure eye infections in humans and as a training tool for hunting dogs. We continue.

It’s not long before we halt at a paw print. To me it looks fairly fresh, and since I had been on a safari the day prior, I know it probably isn’t a wild dog, which are rare here, but rather some kind of feline. Banda confirms, “It’s a leopard.” He circles the print, then asks, “But how do we know if it’s male or female?” 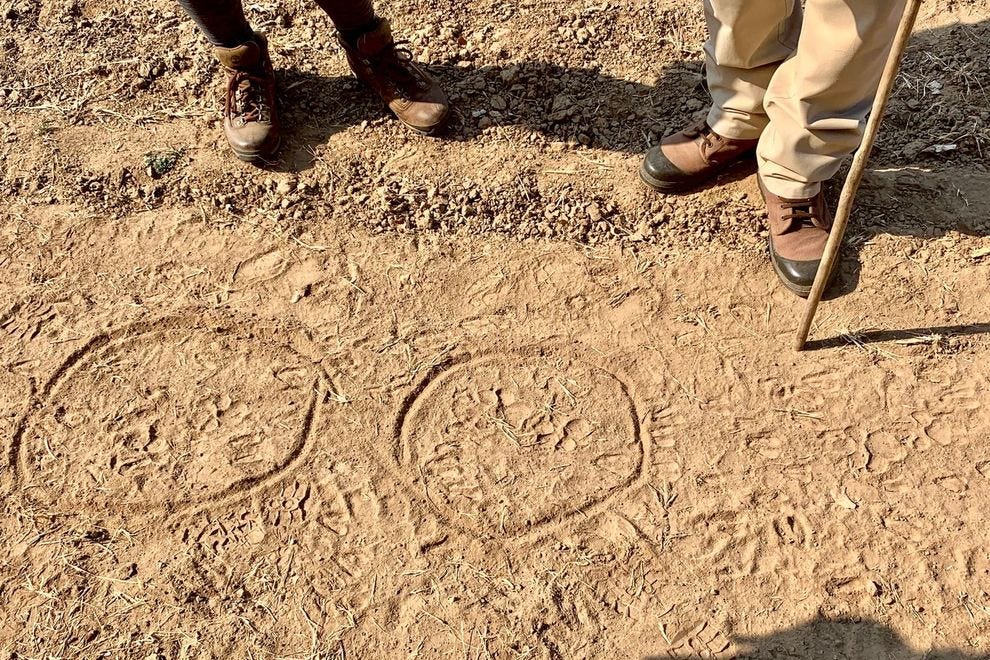 He bends down, preparing to answer his own question since most of us don’t realize you can differentiate without seeing the animal. “You see how the print curves out at the back of the paw? This is a female,” he distinguishes, explaining that males have a completely rounded imprint.

He remains crouched, confirming our assumptions that the print was recent. “You see this line that runs over the print?” I squint and bend down to his level, only to see the fairest of lines burrowing under then popping up again in the middle of the print.

“This is the track of an ant lion. They become active at first light. Since it is 7:30 am and first light is at 6 am, we know the leopard was here before first light.” Banda previously referred to the prints as the “Zambian newspaper,” detailing what had been there and when. Now, it all registers.

On a typical game drive, these are two details we would have never discovered in the first 20 minutes, if at all. And that continued, as we took time to appreciate the untamed nature and surroundings. It was a refreshing perspective and I appreciated the chance to be active after the previous day’s precisely-scheduled feedings at brunch, tea time and sundown in between game drives. This morning, I thought, I’m working for these treats. 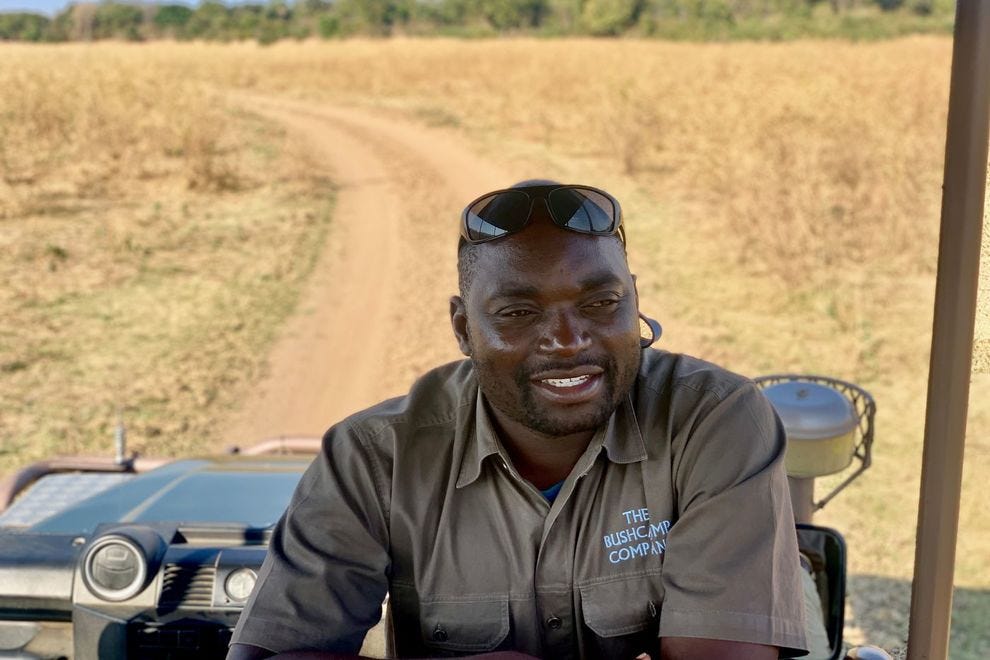 And so we trooped, passing an elephant’s scratching post, mud-strewn with its tiny tail hairs protruding from the worn tree. Then we crossed a dried-up riverbed, tasting the iron-rich soil craved by pregnant women in the local villages, and spotted a business of mongoose scurrying from their morning feeding.

We found the remains of buffalo horns strewn with horn moth pupae, learning that this is the only creature that can decompose the keratin to recycle the horns’ nutrients back into the earth. And we discovered a loose feather, which Banda identifies as a flight feather, due to its curvature. We marched on, listening to the grunts from the wallowing hippos, the babble of the baboons and the singing of the birds.

Pausing to listen to the birds with my untrained, urbanite ear (attuned to trains, sirens and music), the chirps all sounded the same. But Banda highlights and outlines the variations in song and pitch, which allow us to recognize a bird without ever seeing it.

“In our day-to-day lifestyle, we don’t necessarily get to use the sense of hearing to its fullest because we are surrounded by all these artificial noises,” says Banda. “We’re slowly losing our senses but when people get into the bush, they realize, ‘I can still hear that, I didn’t know my sense of hearing is that great.’ The noises you’re going to get are pure, natural sounds.” 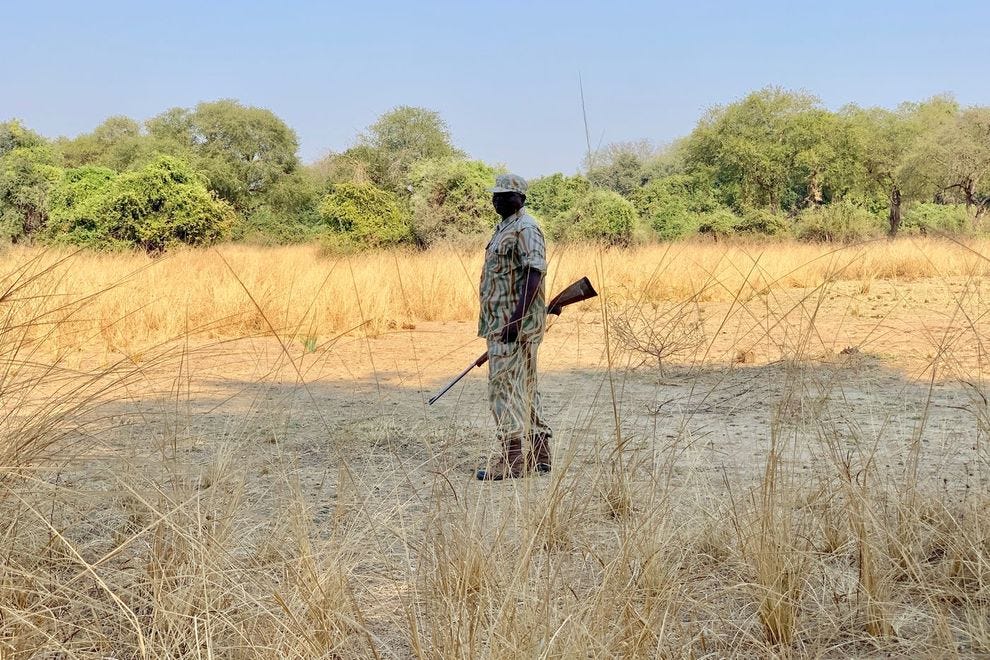 I quickly realize that the beauty of a walking safari is learning. Not just learning about the different animals and wildlife of the bush, but also, survival techniques, which guides like Banda pick up from practical training and their formal studies.

On one of our excursions, we stop at a tree tangled in vines, which Banda cuts and raises to our lips to tastes its lukewarm sap; it resembles water. This is a water vine which can seep enough liquid for you to survive should you get lost in the bush.

I also learned the practical lesson to always carry matches. If you’re lost in the bush, light elephant dung on fire, which creates light in the form of a slow burn for hours. Fire keeps the animals away, so keep it burning throughout the day and night for safety and warmth.

Look up at the night sky to find the Southern Cross, recognizable by the two Pointer (or brightest) stars, then head east in the daylight – you’re sure to arrive at the Luangwa River and once you’re at the river, there’s life and a way out.

But if you’re with Banda, or anyone at The Bushcamp Company, you shouldn’t have to worry about getting lost. Though, I did focus on purposely getting lost: mentally letting go. I think that was my most important lesson. To not anticipate the next moment because I didn’t know what was coming next. I had to be prepared, but I didn’t always know what I was preparing for – and that was okay.

It’s okay to slow down and not worry about service and internet and deadlines and emails. It’s okay to focus on the present moment – something that our hectic society has taken away from travel. A safari is – and always was – meant to be immersive.

It’s an entirely unique world offering an indescribable experience. And the best way to take full advantage of this experience is combining a walking safari to pick up on the details you’d otherwise miss. And why would you want to miss a beat?