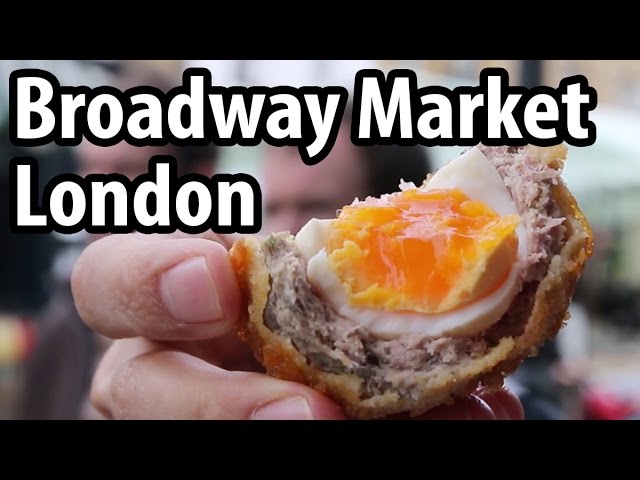 When you’re in London on the weekends, one of the best things to do is go to one of the weekend markets. Broadway Market has been around since the late 1800’s, when it was a small neighborhood street. According to their website (http://www.broadwaymarket.co.uk/), the market began in the 1890’s and it was originally a place where people started selling their local produce. The market thrived, but during the years, as the economy went up and down, the market eventually passed and pretty much came to an end for a number of years.

In the recent years, Broadway Market in London has experienced a bit of a renaissance and made a comeback in a big way. Every Saturday, starting around 8 or 9 am, food and produce vendors set up along Broadway road on the East side of London, in Hackney. Many people show up, hungry, ready to eat, and ready to shop for good quality produce and food products. What I really loved about the market is the friendly neighborhood feel to it. Lots of people gathered with friend to hang out, have a beer or a cup of tea, eat some delicious food, and just enjoy the great social atmosphere of the market.

When I visited London, Ying and I were on a short trip with Chowzter.com, and one of the things we did while in town, was visit the market. It was my first day in London, so I was pretty excited to get out and explore the market and start to eat as much as I could. I was quite happy with the selection of international foods available at the market, ranging from Ghanaian food to Vietnamese and even Thai food. But, since I had just come from Thailand, I was actually trying to stick with more English / UK or at least more European food for the trip. The first thing I tried was some kind of a chocolate brownie cookie filled with cream. Overall, it was quite good, but I’m just not a huge fan of sweets.

I’m a huge fan of smoked salmon, so when I noticed the stall selling smoked Atlantic salmon, that was immediately on my food radar. They were just serving a slab of smoked salmon on a piece of bread along with a garnish of cream cheese and piece of dill. The combo was incredibly good, the smoked salmon was marvelous. It had been a long time since I had eaten smoked salmon, so I was pretty happy, and it was very tasty.

A Scotch egg is something I’ve wanted to eat for a long time, but I had never had the chance. So walking around Broadway Market, I noticed the Scotch eggs, and could not resist. She had a number of different version, but the one that caught my eye the most was the haggis Scotch egg, which was basically a hard boiled egg, covered in haggis sausage, lightly breaded, then deep fried. When I ordered it, she sliced it in half, gave it a pinch of salt, and handed it to me. It was an awesome protein ball, egg, covered in haggis meat, and I loved every bite of it. To get some more meat, I decided to get a roast piri piri chicken at the end. It wasn’t the best chicken I’ve had, perhaps it was a little bland, but it did taste good, and it was pretty cheap for a big amount of chicken. Finally to round out my eating food trip to Broadway Market, I got a couple aubergine rolls, which were eggplant stuffed with feta cheese and a few herbs and spices. They were very tasty, and a great way to end the day at the market in London.

Thank you for watching, see you on the next video! – Mark Wiens