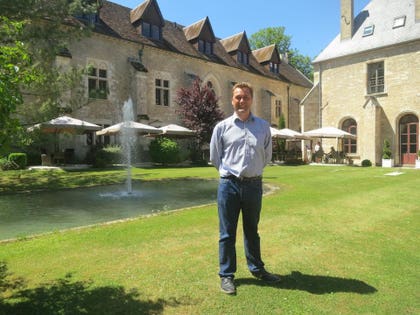 What Englishman—or woman—in their right mind, would try and beat the French at their own game? Buying into not only their precious architectural heritage, but prized culinary traditions. In the heart of Burgundy’s Côte d’Or region, a British chef turned hotelier did just that. Clive Cummings purchased the Abbaye de la Bussière outright in 2005, on a day visit to France. The Cistercian abbey—a national historic monument—was up for sale for the first time in centuries. And not from any old seller, but the Archbishop of Dijon.

Cumnings was born into the hotel business. He helped his parents convert Amberley Castle in West Sussex into a luxury hotel and restaurant in 1987, while training to be a chef at Westminster College in London. Several years later, destiny came knocking on his door. “Just by chance a friend of a friend phoned and said there’s an old abbey in Burgundy up for sale, owned by the church, and the Archbishop of Burgundy can’t afford to restore it. So we jumped on the Eurostar, came down to see it–myself, my mum and my dad–and signed the sale agreement the same day.”

Tucked within the forested folds of La Bussière-sur-Ouche, a half hour’s drive southwest of Dijon, the abbey was founded by an English monk in the 12th century. Now the gargoyled monument is somewhat ironically back in the hands of an Englishman. Cummings together with his wife Tanith have since turned the establishment into a luxury hotel, and unmissable stop on the Relais & Châteaux epicurean tour de France.

It was no mean task he says. Months of battles with locals and the administration followed the purchase. “I’ve walked around the lake many times, wondering how on earth did I get myself into this … the pressure on finances for 10 years was very hard, as everyone presumed from day one that we would be a luxury Michelin-style. Plus there is the totally different way of life, of doing business, and the tax system as well!”

From Religious Retreat to Relais & Châteaux

The abbey had been operating as a spartan spiritual retreat—nothing luxury about it. It wasn’t easy convincing the churchly powers that be to convert it to far more hedonistic ways. “I came from a prestigious Relais & Châteaux hotel in England to a spiritual retreat in France where everyone was walking around in flip flops and shorts, and people were doing their exercises on the lawns … it  was quite a shock,” Cummings says.

He hired an architect, then a full hotel and culinary team, and got his most important wine list in order. But the culinary invasion by the so-called British “rosbifs” (roast beefs), as local French protesters scrawled on the Abbey walls, was still far from fait accompli. Clive and family faced immense hostility–and were treated as the Brit fly-by-nights. “When it was announced in the papers, there was an immediate outcry and backlash against the church, a petition with 3,500 signatures, and three legal cases with people trying to anul the sale saying the church couldn’t sell assets. People thought we were to quote local papers going to ‘create a paradise for playboys and stuff the locals’.”

From an original 9 rooms, the hotel now boasts 20 rooms and suites. Located within the main building, my former monk’s chamber is decked with a jacuzzi, high tech fittings, and a big teddy bear poised on a four-poster bed. Neighboring rooms pay homage to other must-see Cistercian abbeys of the region–Citeaux and Fontenay, while more recent suites have been carved into the beams and arches of the old hermitage building, with views over the park and lake.

Though far from being in the clear on his loans, Cummings today is sitting pretty as an abbey master with an eclectic international clientele. This he tells me, sitting in an antique chair, covered in family clan tartan, alongside a knight in shining armour costume. “I learn something new every week here and it is just such a privilege to be part of the history, and I am just glad to be the family who saved it. You know if you close a building like this, it doesn’t take long before the roof falls in.

Even after spending lavish amounts on the revamp, he still has some cultural spats on his hands. This time with guests who insist on a full English breakfast. “In France you don’t have bacon and eggs and hashbrowns for breakfast, you sit there with a bit of fresh fruit, a bit of charcuterie, some pastries, and a yoghurt, whereas the English want a great big greasy fry-up.” Even when they are in France? … “Oh yes, sometimes I bang my head against a brick wall. Burgundy is a very gastronomic region, and to me it’s very important to highlight that.”

Insisting on being authentically French has paid off. The abbey’s candelabra and stain glass decked Restaurant Le 1131 has won many culinary accolades, including a Michelin star. In 2017, chef Guillaume Royer won a Gault de Millau ‘Great Chef of Tomorrow’ (Grands de Demain) award, and his star is still rising. Far from English fry-ups, here the menu features Bourguignon cuisine, local and seasonal, of which Royer is a staunch defender. The cellar offerings too, of prestigious vintages stored in ancient limestone, are fitting–not only to the Burgundy location, but the monks’ winemaking past.