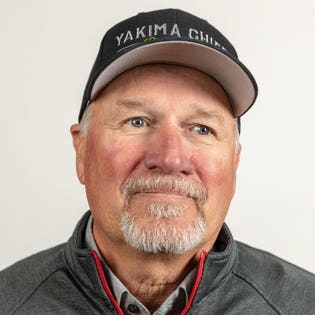 For five generations, Steve Carpenter’s family grew hops in the Yakima Valley. And while the honest Carpenter wouldn’t seem out of place in a hop field, today he handles a position with slightly more responsibility: Chief Supply Chain Officer of Yakima Chief Hops (YCH), the largest hop company in North America.

While growth often causes a diffusion of responsibility, the family-first ethos of the Carpenter’s hop farm is still very much alive at YCH, which focuses on value, transparency, and sustainability. In 2018, the hop company created the “Pink Boots Hop Blend,” donating $3 from the sale of every pound to the Pink Boots Society, an international non-profit organization that supports women in the brewing industry. Their efforts raised $40,000 to create scholarships for Pink Boots, a number they smashed in 2019 by raising over $100,000.

“Thirty-one years ago, we had very few brewery customers come to the farms,” said Carpenter. “This year, we had more than 300. Immediately after their selections, they want to go visit the growers. Whatever else you can say about us, we’ve spent the last thirty-one years achieving a greater degree of transparency in the industry.”

Kenny Gould: How’d you get into the hop business?

Steve Carpenter: I grew up on a hop farm. My family has grown hops in the Yakima Valley since the late 1860s. I was part of a 5th generation hop generation in the lower Yakima Valley.

KG: Wow. You’ve been in a unique position to see the industry evolve.

SC: When I was there, it was a different industry. About 31 years ago, my father, the Smith family, and the Perrault family felt we needed to do things a little differently. Back in the 80s, there wasn’t a lot of transparency in the industry. It was dominated by the hop dealers who didn’t only broker the hops, but provided information between brewers and growers. As growers, we felt that the most important stakeholders in that equation were the brewers and the hop growers. We set out to change the way things were done. We wanted transparency. We felt that the more we knew about what our brewer customers needed, and what we went through to get them the product, the better the system would be.

KG: So you formed a collective.

SC: The company started with three families. That was back in 1988. We bought a cold storage unit in Sunnyside, which is about 35 miles south and east of Yakima. We stored a few bales that first year. Eventually, we got big enough to need a pellet plant, so we put in one of those. I believe that was 1991.

KG: That was way before the craft beer boom.

SC: Our original purpose was to produce alpha hops for Pfizer. We created a strategic alliance with them. By 1997, our original alpha program had grown to about 6 million pounds. We were working with an additional 10 growers. We decided that having 6 million pounds was a significant risk going into one program, so we attempted to purchase our own extract plant in Sydney, Nebraska. We got right up to the point of due diligence when we got a phone call from our largest competitor — they had bought the plant. So we made the decision to build our own extract plant in Sunnyside. Our original three grower-owners from the original three families extended the offer to the 10 families from which we were sourcing the alpha hops. They all agreed to come on board and create what was originally Yakima Chief in 1997 or 1998.

KG: Did that turn out to be a smart move?

SC: That first year, we filled to capacity. From there, we branched into aroma hops. One of the important thing we started in the 1990s was our own hop breeding company. We developed some products that have really resonated with the craft brewing population. Simcoe®, Ahtanum®, Warrior®, and Palisade® were the varieties we developed with the Yakima Chief Program. In 2000, after several lawsuits over hop varieties, we chose to settle with our largest competitor and create the Hop Breeding Company, where we created Citra®, Mosaic®, and Sabro®.

KG: So the two of you are the exclusive suppliers of those hops?

SC: The joint venture we created owns the intellectual property rights to Citra®, Mosaic®, Ekuanot®, Loral®, Sabro®, and a whole number of numbered varieties that haven’t been released. Once the variety is released, the IP is maintained by the Hop Breeding Company. It was somewhat of a shotgun marriage because it was a feature of settling lawsuits. But in hindsight, it was the right thing to do. Our customers have the choice when they buy Citra®, Mosaic®, or Sabro® of buying from two different supply chain systems There are other companies with their own private programs, but we get a pretty steady flow of customer complaints that they can only get their products from one supplier.

KG: At this point, how big is YCH?

SC: The US is producing about 100 million pounds of hops. We’re a US based, grower-owned company. We’re probably 35 to 38% of the US crop. We handled about 40 million pounds this year.

KG: That’s wild. In two generations, you’ve gone from being farmers to running more than a third of the country’s hop production. Was that a difficult transition?

SC: The other day, I had a beer with one of our grower owners. No one set out to become the biggest hop company in North America. We set out to bring a high level of transparency to the supply chain and change the way things were done. We really thought that the more brewers knew about us, and the more we knew about brewers, the better things would be. On the farm, a lot of time you’re a price taker. On the farm, you don’t have access to how the consumer uses your product, what’s important and what isn’t. There’s a merchant layer or dealer layer between you and the end product. The vision of the three original families and the families we’ve worked with since has been removing that layer. We’ve focused on creating value and helping our brewer customers make great beer. We have a passion for that. We recognize that great beer, in many cases, starts with great hops. And great hops start with a well-designed supply chain that’s transparent, has a very high degree of traceability, and where our growers work together collaboratively to develop best practices and sustainable practices. That sense of sustainability and leaving the planet in better shape than when we found it, in a place where our employees are treated fairly, and where we have a stake in our communities… that’s important. These are the places where we live and work.

SC: If you go into a lot of the craft breweries, you’ll notice there’s always a group of guys and gals in the corner with taster flights. My generation, when we drink, we ask, “Does it taste good and what does it cost?” This younger generation is interested in the story behind the raw materials. They want to know you’re being socially responsible, that you’re treating your folks fairly and that you’re looking after your communities. The other thing young consumers like is knowing the hop varieties, and even knowing the growers that produced them. A big part of what we do at YCH is tell the story of our growers. We’re trying to meet the need of craft beer drinkers for their thirst but also what goes into the beer.

KG: And what do you do for YCH?

SC: I’m the Chief Supply Chain Officer. In 2014, Yakima Chief and Hop Union — the two grower-owned companies here in the valley — merged. I took on the role of Chief Operations Officer for the company. In 2016, I stepped into the role of interim CEO. Since then, my title has been Chief Supply Chain Officer. I’ve got responsibilities for the supply chain for the hops from the field through warehouseing. I work with growers, I work the procurement team. I’d like to retire in a couple years, but I’m having so much fun. I tell this to people — it’s a lot more than a job. It’s a cause. I want to make sure that next generation takes this to the next level. It’s going to be fun to see where the next generation goes.

KG: Are you proud of how the industry has developed?

SC: It’s good to be in the position we’re in. We’re not losing sight on what has made us what we are. Any successful company stops every once in a while to look back and teach the younger generation what happens when you’re committed to making positive change in an industry. It doesn’t come without hard work and sacrifice. But one of the fun things about being a part of a conglomeration of family businesses is that we keep that family attitude. We know the history. There’s nothing more rewarding than being part of something that’s bigger than yourself. I think that’s something we’ve accomplished here at Yakima Chief Hops and we want to keep that going for the next generation.

-Interview edited for brevity and clarity.