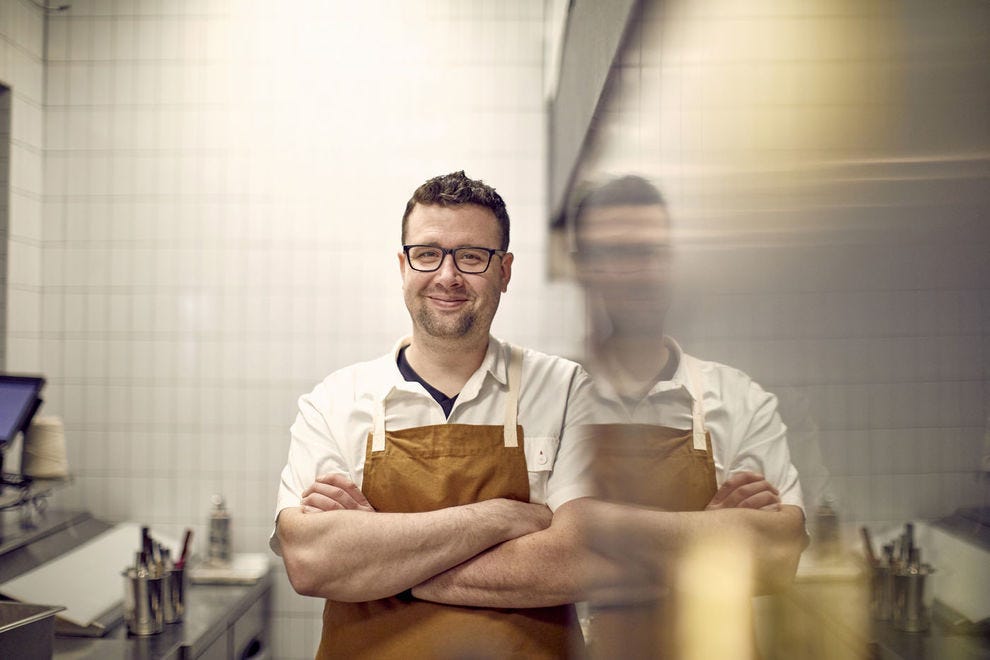 Away from the 300-seat steakhouses and restaurants in the West Loop and River North, Logan Square has become a mecca for independent, chef-driven restaurants. Here, the chefs tend to be majority owners and involved in every aspect of their business.

Chef Joe Frillman at Daisies is the perfect example. After running the kitchen at Boka Restaurant Group’s Balena, he opened his own restaurant in 2017 serving the same killer pasta and working closely with his brother at Frillman Farms.

“The chef community here is a tight-knit one,” Frillman says of his Logan Square colleagues. “We focus more of our dollars and attention on the food and personal guest interaction as opposed to the chandeliers, branding and décor of the big budgets you get downtown.”

In his own words, here are some of Frillman’s favorite spots to eat on his rare days off.

“This is solid approachable food. You get these three guys with stellar resumes ([restaurants like] Nightwood, Avec, Lula) who are like-minded and just want to put out a really fabulous experience with no bulls— or pretense. While the food is something to absolutely write home about, it’s the service and wine program that really set them apart.

“Logan Square does not always pride itself on service but these guys take that to the next level. Josh [Perlman]’s Avec experience shines through in every detail of your meal here. It’s always one of the first places I tell people to go, not just in Logan but in all of Chicago.”

“In my opinion, Brian [Enyart]’s Mexican-inspired cooking is second in Chicago to maybe only Rick Bayless himself, who happens to be the guy that Brian and Jennifer learned from as chefs of Topolobampo for so many years. Jennifer handles the sweet side of the menu and the husband-and-wife team consistently knock it out of the park for me. It’s one of my go-to spots in the neighborhood for Mexican-inspired cuisine that showcases their fine dining technique in a more casual setting.”

“I have lived around the corner from this spot since it opened, and it has the best bowl of ramen in all of Chicago. There is a consistent wait for a table, so go early and often. My favorite is for lunch as it tends to not be quite as busy, but I don’t go anywhere else when I’m in the mood for a great bowl of ramen noodles.”

“This spot is 24 hours of greasy deliciousness. They get most of their attention for the burgers and fries but my favorite here is the fried shrimp with mild sauce – thinly breaded with tails removed so you can eat the entire thing. They are cash only, so plan ahead so you don’t have to pay the ATM fees.”

“Two of my favorite things in life – pie and biscuits. Bang Bang has become a Logan Square staple for all things delicious. Fun pie combinations as well as the classics sit next to solid breakfast and lunchtime biscuit sandwiches that will keep you going all day long. Lines can sometimes get long, but [its is] definitely worth hitting the patio in summer time to take in the short summers we get here.”

“Chicago has the most breweries in any city…in the country so it’s hard to stand out. The recently opened Middle Brow cranks out not only interesting nuanced beers but they have a fabulous bread program that’s highlighted by their pizza. In a city with mediocre, lasagna-thick, deep-dish pizzas, the thin crust pies here deliver in a big way. The beer list is classic but also has some way out-there brews that deliver in a big way and their outdoor patio is fantastic.”

“Chicago winters are brutal. There’s no way to make up for the never-ending cold except by countering it with an oppressively hot and humid summer. We beat the -50-degree wind chills by stuffing our face with deep dish, beef sandwiches and Vienna beef hot dogs. So, come summer when the heat index far exceeds triple digits…the first place I go is Pretty Cool Ice Cream.

“You will find more traditional flavors like orange confetti pop (creamsicle), vanilla sparkler and Midwest favorite, blue moon, but also some fun flavor combos like peanut butter potato chip or her pie pops with my all-time favorite key lime pie bar. If you have kids, it’s the perfect summertime hangout as you can bring them over to the open glassed-in kitchen to watch the magic happen.”

“One of the more compelling and creative restaurants in the city is this small, 20-seat dining room just off of Diversey Ave on the northern edge of Logan Square. The daytime café and dinner menu are scribbled on butcher paper and are largely based off what chef Ethan Pikas can scrounge up from the farms of the Midwest.

“The incredibly creative menus often lean vegetable-heavy and change so often, you will rarely have the same thing twice. Some constants you can set your watch to are the flawlessly executed quiche and ever-consistent and incredibly reliable bread program. They have, without a doubt, the best bread in all of Chicago, if not the entire country. It is worth the journey from downtown for that alone.”

“I don’t go out drinking these days as much as I used to, so when I do, I want to make it count. Scofflaw has one of the better cocktail bars in the sea of cocktail bars that has become Logan Square. They focus on gin, but have a variety of applications to show off the spirit on their concise cocktail menu. If you’re not into gin, they always have a rotating classic cocktail that changes weekly, and a full food menu to get a bite to keep yourself semi-lucid.”

“Just outside the Logan Square border, you will find some of the best fried chicken in all the land. Served with cornbread biscuits and honey butter to dip your chicken in, it is the perfect bite of savory and sweet and crunch and fat and ‘wow.’

“This is a place that has never disappointed, and it’s run by the genuinely nicest group of people you will ever meet. A fast-casual concept that delivers hospitality and quality product. They also have fun spins and flavor combos in sandwich form, my favorite being the Camchi Kimchi Fried Chicken Sandwich. Bring your family as it’s extremely kid-friendly, and their patio in summer is not to be missed.”

“It’s hard to talk about Logan Square without mentioning one of the places that put it on the culinary map. Coming up on its 20th year in business, Lula’s all-day café helped pioneer the farm-to-table concept in Chicago. The menu changes seasonally, but always has its Monday Farm dinner that has never repeated a dish in the 20 years it’s been opened.

“I could write all day about the food and the restaurant but the bigger influence it has had is on the Logan Square community as a whole, as well as serving as a breeding ground for some of the best chefs in the city. Jason Hammel’s approach to food no matter what decade always seems to be refreshing, but his commitment to his employees and the surrounding community is truly the legacy that he is leaving. Serving breakfast, lunch and dinner, they consistently deliver the wholesome unpretentious meal I am in pursuit of.”