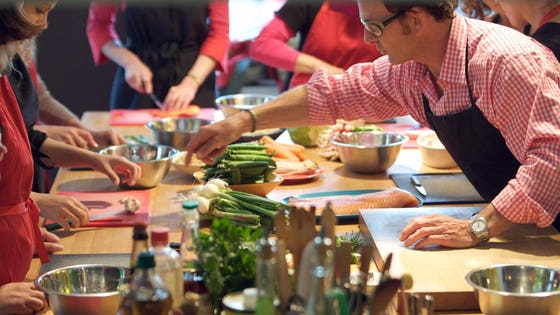 Uber is researching a new way to get food through Uber Eats, but it’s not delivery. On Friday, Uber launched a new experiment called Uber Moments, which lets customers book culinary classes such as ravioli making or a five-course dinner directly through the app.

In an email sent to San Francisco customers, Uber said customers could book Uber Moments for the next month until November 17. The “Moments” Uber offered include the option to book a $75 class on making Chinese dumplings and a $55 five-course Nigerian dinner.

“We’re always thinking about new ways to enhance the Eats experience,” an Uber spokesperson said when asked about the pilot.

The one-month, one-city trial is very limited for the global ride-sharing giant, but could signal a new revenue source for Uber and a new front for competition. For example, home-sharing startup Airbnb has spent the last three years building out its own Experiences platform to let people book everything from surfing to behind-the-scenes museum tours. It already counts over 1,000 cities on the platform, with more than 40,000 experiences available. Other online travel agents, like Tripadvisor-owned Viator, also offer cooking classes and tours. So far, the Uber Moments trial seems to be limited only to food.

The test of Uber Moments is part of the company’s desire to become more than just a ride-hailing app. In September, Uber CEO Dara Khosrowshahi announced that the company would be combining Eats and rides (alongside any other future products) into the main Uber app: “What we want to be as a company is the operating system for your daily life.” At the time, the company teased products like grocery delivery, but with Uber Moments, local experiences and special events could be in development, too.