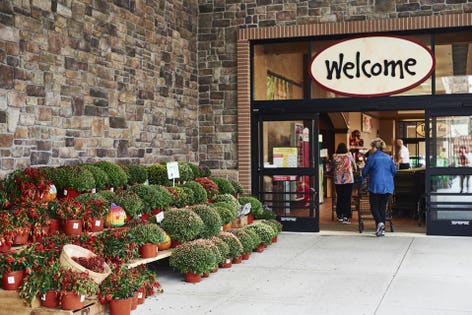 New York City residents finally got their Wegmans on Sunday. And, they aren’t the only city dwellers to see the arrival of new grocery stores.

Last week, Phoenix, which is in the midst of a transformation, finally got a downtown grocery store when Fry’s opened a branch on Washington Street.

In Boston, Trader Joe’s opened a branch in the Seaport neighborhood, bringing groceries to a fast-growing office and residential area.

Residents of Chicago’s Hyde Park neighborhood also got a Trader Joe’s earlier this month, replacing a branch of the beloved Treasure Island chain which went out of business last year.

In Worcester, Mass., Maker to Main, a hub for local produce, plans to open a downtown grocery in 2020.

These grocery stores are in addition to the branches of Whole Foods and other stores that have opened in other parts of the same cities.

But, in a number of places, residents have waited years to be able to access good-quality groceries without having to drive, take public transportation or ride sharing.

What’s behind the flurry of grocery investments?

Grocery stores follow new residents. Brooklyn, Boston and Phoenix have all seen an influx of newcomers during the past decade.

Brooklyn rivals Manhattan as a fashionable place to live, but it never offered the kind of suburban grocery shopping that other parts of the metro New York area enjoyed.

The Seaport has gotten a big boost in the past few years from commercial development and office buildings, which are now being followed by residential buildings.

In Phoenix, there’s been a determined effort to develop downtown and its nearby neighborhoods. A lot of the development has followed major downtown investments by Arizona State University.

Worcester hasn’t quite caught up with those places, but it is getting a new minor league ballpark and the central Massachusetts city is experiencing its own downtown revival.

Now, there’s enough critical mass in those cities to warrant the investments.

To be sure, these groceries don’t solve the problem of food deserts which exist in a number of American cities. But, at least they offer more options.

Residents want choices nearby. Of course, Phoenix already has Fry’s and many other grocery stores, including Safeway, Whole Foods, Trader Joe’s and the upscale A.J.’s Fine Foods.

Likewise, there are Trader Joe’s scattered across Boston (I’ve shopped at the ones in West Newton, Cambridge and Brookline).

And Chicago doesn’t lack for grocery stores, despite losing Treasure Island a year ago, with big chains and smaller ones like Plum Market, Mariano’s and Foxtrot Delivery Market.

But, convenience is everything. Ever since the development of post-war America, people have wanted stores near their homes, no matter how many stores are available across town.

And, they want those stores to be more than the places where their parents and grandparents shopped.

The expansion of salad bars and deli counters, along with in-store restaurants is transforming the grocery industry.

These stores are no longer places simply to pick up ingredients, take them home and cook them.

You can get dinner before you shop, or simply head to a grocery to eat or drink, which has been a signature feature at Whole Foods stores.

That adds an element to the equation that a grocery chain considers when it chooses a location for a new shop.

For instance, the Brooklyn Wegmans is stressing its on site dining options, including burgers and pizza. If you’re going to take a ferry from Manhattan to shop, you might as well eat while you’re there.

Real estate opportunities. Across the United States, groceries are seen as attraction options by developers when they build new clusters of shops and restaurants.

In Brooklyn, the new 74,000 square foot Wegmans is part of a development in the Brooklyn Navy Yard called Admiral’s Row. It is named for a row of 10 homes, built between 1864 and 1901, that were used by naval officers.

The new Boston Trader Joe’s is part of a section called Fort Point, which has already attracted a Shake Shack and a branch of James Beard Award-winning baker Joanne Chang’s Flour Bakery + Cafe.

The Phoenix Fry’s actually is preceding new apartments, restaurants and office space in the development, called Block 23. The apartments are set to be available next year.

In fact, Wegmans plans another urban market, in Washington, D.C. in a development called City Ridge.

These developments means city residents need no longer rent cars for a weekend to go on a shopping trip, or pay for grocery delivery.

Some of them can walk out their door, or just go downstairs.