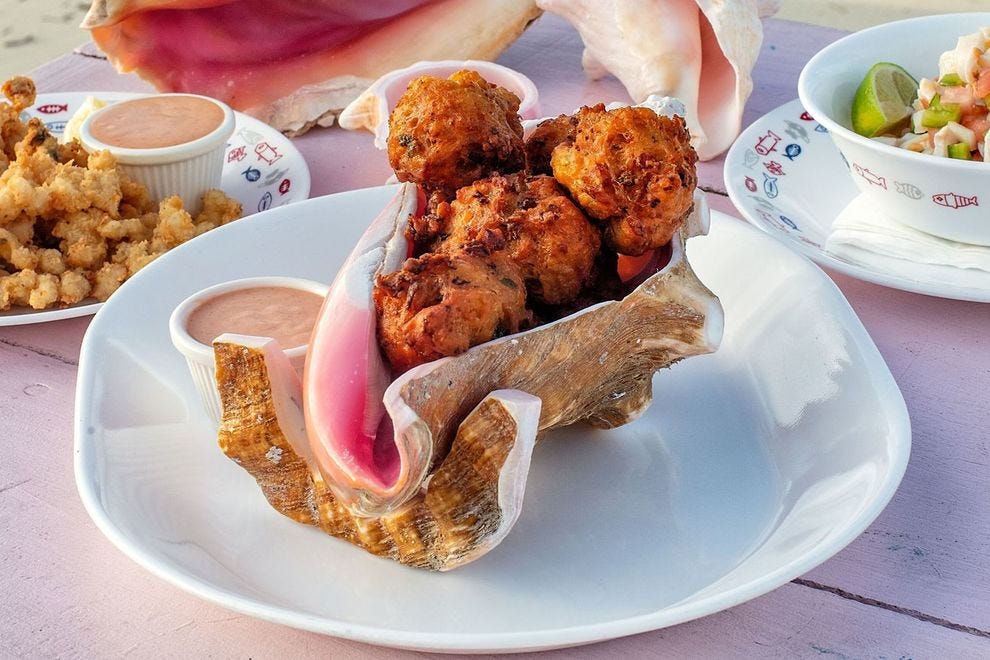 In the British territory of Turks and Caicos, conch is king. The marine snail is a major component to many local dishes, even making an appearance on their official coat of arms. Aside from the conch, local cuisine is largely influenced by recipes common in Jamaica and the Bahamas.

Here are 10 dishes you shouldn’t leave Turks and Caicos without trying. 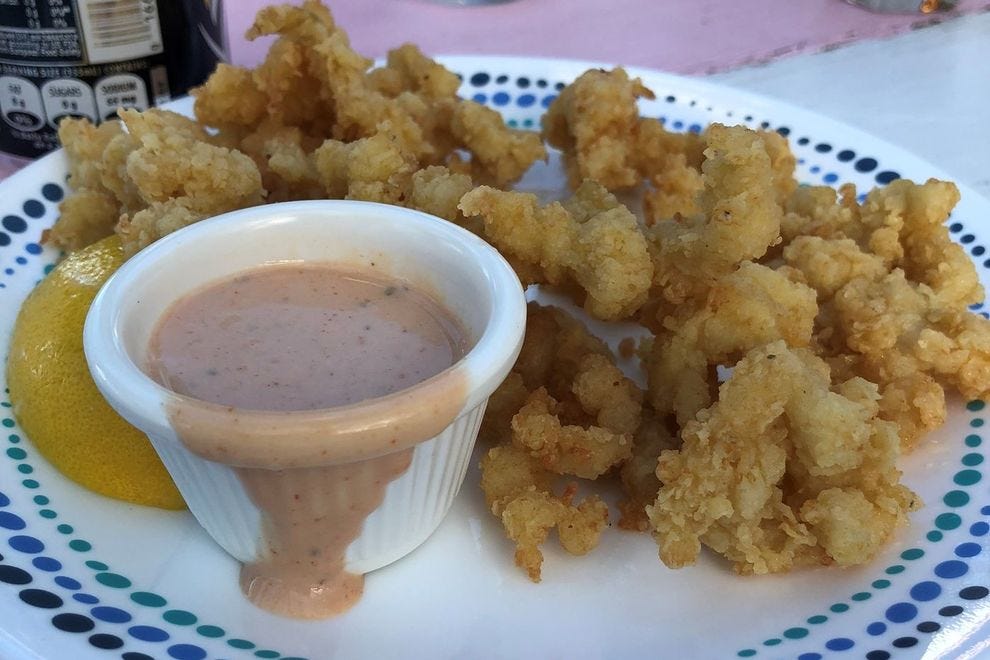 The queen conch, a large herbivorous marine snail wrapped in a heavy spiny shell, might be considered the cornerstone of Turks and Caicos’ cuisine. While delicious, the tough meat requires a fair amount of tenderization before it can be served in most dishes.

To prepare cracked conch, the meat is pounded with a mallet until tender, then breaded and deep fried. This dish, along with most other conch dishes, plays a major role in the cuisine of the Bahamas as well.

For those visiting the island of Providenciales, the Island Fish Fry is a great way to immerse oneself in the local culture. The event takes place every Thursday night, with residents selling handmade souvenirs and cooking traditional dishes, all set to local music.

As the name implies, fried fish is plentiful at the event, though there a number of other dishes available as well. Pair your fish with a beer from Turk’s Head Brewery, or try it alongside a pour of the local Bambarra rum. 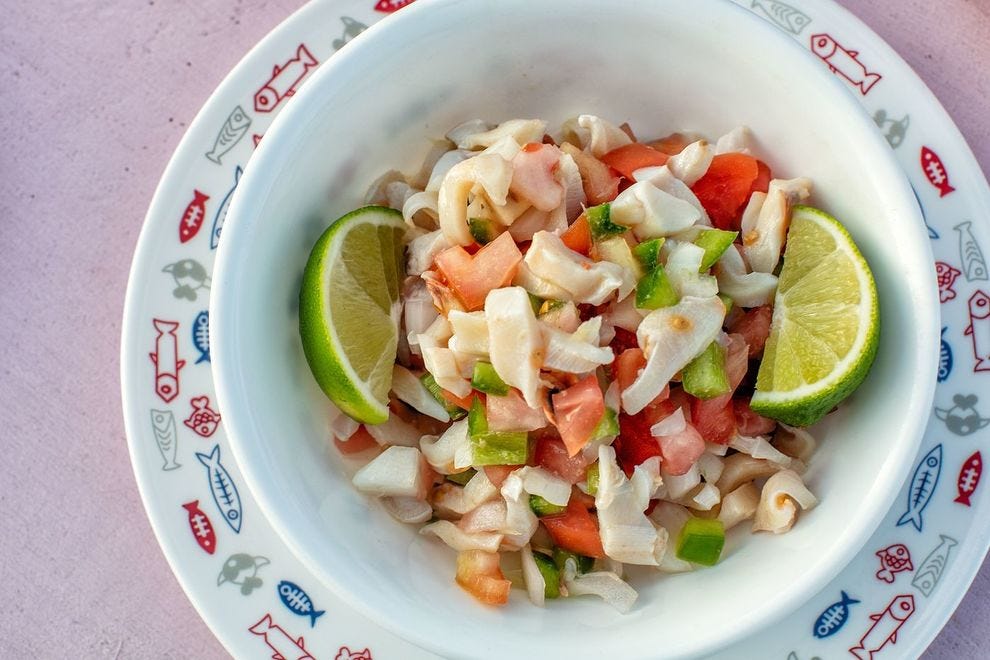 While indigenous inhabitants of the Turks and Caicos Islands had little else to eat aside from seafood, the influx of new fruits and vegetables from other parts of the world led to the creation of one of the territory’s most iconic dishes: conch salad.

The conch meat is tenderized with a lime juice marinade, after which it’s mixed with a blend of produce typically consisting of tomatoes, onions and peppers. The meal is served as a ceviche, using the raw conch as the dish’s seafood component. 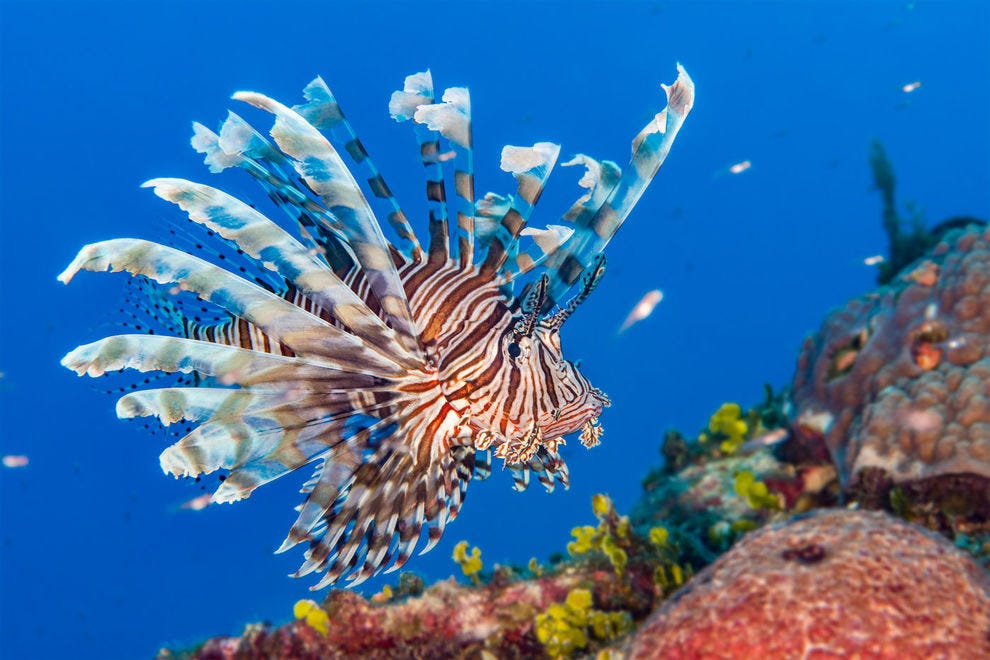 While beautiful to look at, the lionfish is regarded as a major nuisance to the local ecosystem. With an aggressive temperament and ravenous appetite, this introduced species wreaks havoc on the native fish species who call the Caribbean their home.

The local government has stepped in to address this problem, selling lionfish hunting permits to visitors and residents. In fact, the lionfish is the only fish species in Turks and Caicos that can be legally hunted through spearfishing. Once captured, the venomous spines are sheared and the fish can be fried and served.

Conch is an integral part of the history of Turks and Caicos, but some conch dishes are relatively new to the territory. Cooking oil has traditionally been inaccessible to the region, meaning that any deep fried conch dishes have only been in existence for a short amount of time.

Conch fritters, beloved in Turks and Caicos and the nearby Bahamas, consist of a savory blend of shredded conch, onions and peppers, which is then coated in batter and deep fried.

Though most commonly associated with Jamaica, the territory of Turks and Caicos is no stranger to jerk chicken. It’s believed that the unique amalgamation of different cultures across Jamaica led to the creation of this dish.

The Taíno people slow-roasted their meat over a wood fire, and escaped slaves living in Jamaica preserved their meat with a complex spice rub consisting mostly of allspice and native peppers. When the two groups met, the two methods were combined, ultimately leading to the jerk chicken we know today.

Turks and Caicos is rich in white sand beaches and brilliant turquoise water, but arable land is not so plentiful. Few crops grow well in this arid climate, and the native inhabitants of the islands couldn’t rely on staples such as cereal grain or rice.

Instead, they grew a hardy variety of maize, which was then dried and softened with an alkali solution. This end product is known as hominy, which is often ground into grits and served as a side dish. 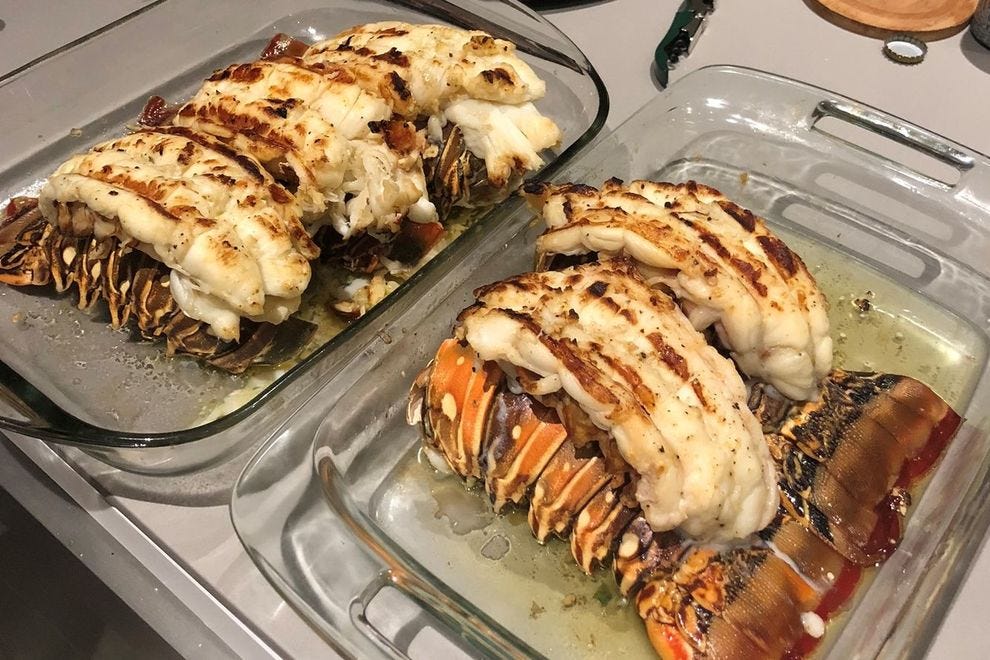 Despite the name, Caribbean lobsters are not actually part of the lobster family — Photo courtesy of Jared Ranahan

While conch is a treasured component to many local dishes, the Caribbean lobster also plays a role in the islands’ cuisine. Displaying rows of sharp spines and lacking the large claws of their cold-water counterparts, the main attraction of this variety of lobster is the tail.

Typically grilled and served with drawn butter, these tails serve as a milder alternative to the sweet cold-water lobster tails.

The johnnycake recipe originated in early indigenous America, where native coastal populations from the Labrador Peninsula all the way down to the Greater Antilles introduced the dish to European colonists. Consisting of just cornmeal, salt and water, the batter is cooked in a skillet and often served as a side dish accompanying boiled fish and hominy.

It’s uncertain where this dish first arose, with some claiming origins from the Narragansett tribe of Rhode Island. 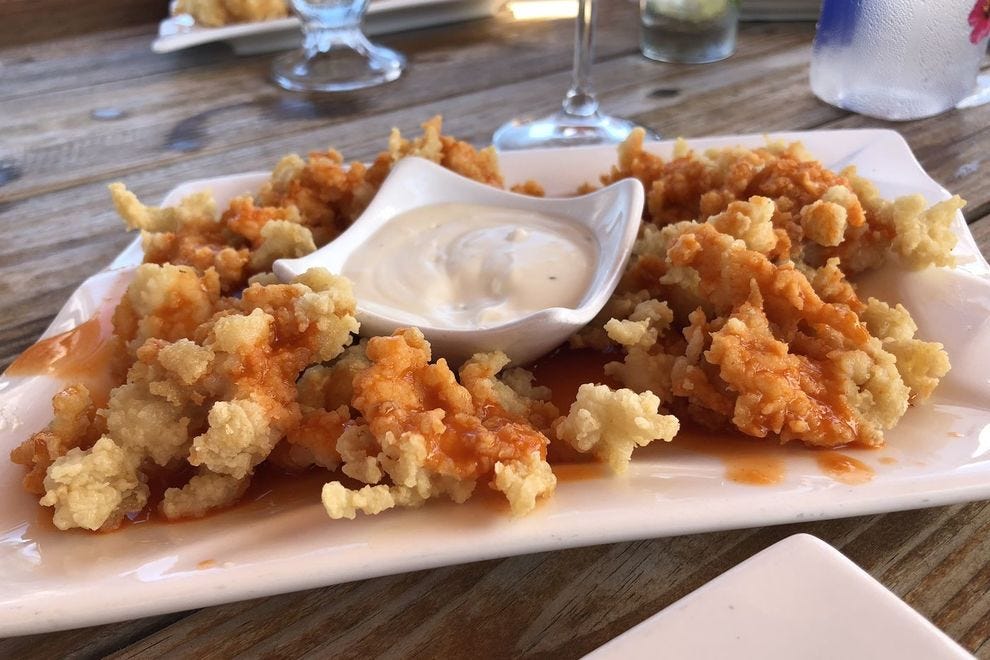 Not immune to food trends, you can also find a buffalo variety of conch at Bugaloo’s. Fried and dipped in a buffalo sauce with a kick, it’s a fun way to enjoy a twist on the classic conch dish.

Given the wide array of conch dishes available across the Caribbean, it’s no surprise that the queen conch population has started to feel the strain of being such a coveted catch. Though not yet endangered, the species has been impacted by both overfishing and ocean acidification throughout the Caribbean.

Given the species’ prominent role in the cuisine and culture of the Caribbean, we can only hope that the governments in the region will take the proper steps to ensure a promising future for the queen conch.