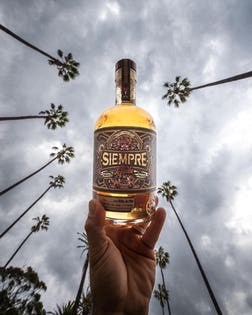 The path that led Alex Lacroix, his friend Chris Matte and his life partner Monica Sanita to found Siempre Tequila has been anything but straight.

In fact, not quite ten years ago, Lacroix was on bail for felony charges, and his future seemed anything but spirited.  At that time, Lacroix’s best friend had just been murdered, and his Toronto recording studio had just been raided by the feds.

Not quite ten years ago, Alex Lacroix’s best friend got murdered, a bunch of the friends he grew up with were headed to jail or prison for various offenses, and almost immediately after that, there was a raid on Lacroix’s Toronto recording studio, and an unregistered gun was found.  Lacroix got charged with a felony.

“That was part of an investigation of other people who had come to our studio to record, and I was one of people stuck with the consequences,” Lacroix says.  “I ended up getting charged with possession of a firearm, and that was the final straw for me, to remove myself all together, from that kind of life.”

At the time, Lacroix’s daughter was only 9-months-old so he knew he had to get his act together. “I was let out on bail, and I immediately got a job as a cable guy, and I applied to college, and ended up getting accepted,” he says. “I told myself, ‘Well, I’m going to go to school, and if I got to trial and have to go to jail, well, I’ll make it as far as I can. I’m doing this for my kid.”

Lacroix worked hard, majored in advertising at college in Ottawa, and he ended up getting an internship that led to a job.  “I won student awards, worked as a teacher’s assistant, all the while driving back to visit my kid every single weekend,” he says.

When his case finally went to trial, he ended up with only one year house arrest.  “That made me work even harder,” he says.  Along the way, he met Sanita, and he reconnected with Matte, whom he had also grown up with (and who had also worked along with him at the recording studio, too).

“Tequila’s in Monica’s blood – her grandmother and great grandmother had made mezcal, and her family sipped tequila after every meal,” Lacroix says. “We were sitting in Monica’s family’s house in Toronto, and we just said ‘Maybe we should find a brand, start importing it and call it a day.’”

That was back in 2014, and after tasting and testing dozens of brands, they decided they couldn’t find anything that they’d want to put their names to.  “That led to us thinking maybe we should start making tequila because none of this is exactly what we want,” LaCroix says. “It kind of snowballed from there.”

Lacroix and Sanita tested, visited and communicated with 100 different distilleries before they selected one master distiller to create their recipe with, and in September 2015, they bottled their first batch. It was just 150 cases, and they only sold it in their home province of Ontario, Canada, which is a controlled market, meaning alcohol is sold to consumers only through government stores.

“We could only sell to bars and restaurants, and they could only buy them in cases of six bottles,” Lacroix says. “They had to spend $600 to just try our stuff. Luckily, the tequila tasted good, and people wanted to buy more of it after they bought it the first time.”

By December 2015, they quit their jobs, and Matte joined them in their tequila enterprise. To keep costs down, they began living out of their suitcases to make and sell their tequila. Today, they’re sold in 20 different markets, including nine states, with six ready to sell their tequila in the near future.  “We’re very popular in Ireland, about to launch in the U.K., Bali and Denmark,” Lacroix says.

They’ve shipped more than 11,000 cases of their tequila, and our expecting to sell about 6,000 more cases this year, with the vast majority of sales happening in New York and California, but they’re still living out of their suitcases.  “It’s becoming very, very interesting,” Lacroix says.

“My daughter just turned nine years old, and she is my hero,” Lacroix says.  “When she spends time with me at the office, she comes to me with tech ideas and start-up ideas. I’m so proud of her.”

“Siempre means always, and we always see the beauty of everything,” he says. “It doesn’t matter how dark your past is or how hard you had it growing up, you can still have a positive impact on the world and turn things around.”