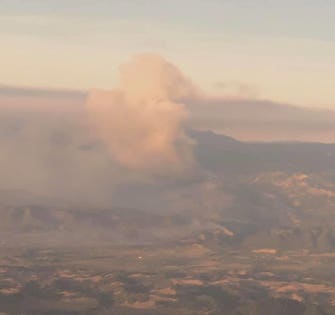 Parked outside her sprawling craft brewery in Windsor, California, on Thursday morning, Natalie Cilurzo interrupted a phone conversation to laugh.

“Oh my God, there’s a Chewbacca trying to get into my brewery,” she explained to the caller.

Unlike on an ordinary Halloween, the costume-clad beer lover must have looked surreal and out of place. Not only was Russian River Brewing’s year-old production facility still closed from what’s believed to be the largest evacuation order ever issued in Sonoma County but the area was just beginning to emerge from the scare of the Kincade wildfire, which had come within a mile of the business.

“At least someone’s still got a sense of humor,” Cilurzo said.

It’s either laugh or cry in central Sonoma County this October, as it endures the third successive autumn of catastrophic fires or flooding. This year, with the fire 60% contained and most of the mandatory evacuation order downgraded to an evacuation warning, no has one perished. This makes it a bit easier to chuckle, even if ironically.

“I just waved at six firetrucks going south (out of town). There’s no wind today so (the local firefighters) should be able to get a handle on it,” she said.

Congratulating public officials and wildfire strategists for a much more effective response and considering themselves somewhat veterans of a process they know will only continue to repeat itself, Cilurzo and her Sonoma brewery colleagues are doing their best to stay positive even as they contemplate the destructive effect this and future disasters will have on their businesses and communities. As she prepared to go inside for the second time to asses the losses she and her husband/partner, Vinnie, had unsuccessfully tried to mitigate by renting a two megawatt generator the size of a tractor trailer, she explained what they and more than half a dozen other local breweries would likely encounter as they surveyed their own smoke- and evacuation-related damage.

“We’re covered with ash and smoke. We don’t have any gas. Power came back on in the middle of night. We can’t brew beer and can’t open our pub,” she said, noting that Vinnie had gotten an emergency pass to enter the building with their head brewer to tweak a few beer batches and thus hadn’t lost any product.

Despite announcing his plans to close the 24-year-old brewpub his father founded seven miles away in Healdsburg, Bear Republic Brewing CEO Richard Norgrove is facing the same issues as Russian River as he tries to reopen the pub for the three weeks between now and the final November 22 closure date. As of Thursday morning he had power but no gas yet planned to open the bar to serve drinks without food. (He wasn’t sure whether the beer left unattended in the tanks during the evacuation had survived.)

“People just want to go sit and talk,” he said.

Though he’d opened his Rohnert Park pub almost immediately the day after the fire started on October 23, at 11 am Thursday he hoped to also open his main production brewery and restaurant in nearby Cloverdale without gas and with power. Before he could do that, he still needed to assess the state of the food in the freezer and the condition of the unfinished beer. Like the Cilurzos, Norgrove had tried to mitigate the impact of increasingly frequent Northern California power outages; unfortunately the biodigester that fuels some of Cloverdale’s electricity stops running when it runs out of gas.

Luckily, he has a contingency plan for any beer spoilage.

“If the batches are bad we will try to salvage them by making them into whiskey later on,” he says, stating that Bear Republic will release a line of whiskey next year. “For me it’s always about the recovery. Even when I coach it is how you manage yourself and recover from being down.”

St. Florian Brewery’s Amy Levin, who runs her Windsor brewery with her husband, Aron, is also finding the silver lining even though their small operation – which still lacked gas and power on Wednesday night — will likely remain closed for at least a few more days as she single-handedly tries to restore order to her family’s home and business while Aron works his day job as fire captain of Windsor.

“All the while,” she emails, “I’m processing the events of the past week…the saintly performance of our First Responder Family to save our Town…& I’m just absolutely overcome with pride.”

The Cilurzos — who raised $1.1 million for residents displaced by the 2017 Tubbs fire and will continue to give away food and beer to first responders at their Santa Rosa pub until they finish putting out the fire – say they’ll figure out yet again how to offer more support. They’re thinking fundraisers and a party for first responders, whom they credit for learning as they go.

“2017 was a practice run, and that was a s*** show,” Natalie says. “Unfortunately, having that experience under their belts, the first responders all said it was so much easier this time.”

Up in Healdsburg, Norgrove also reflects on how efficiently responders evacuated the entire 10,000-person population in just 12 hours — a necessary step to protect them if Fitch Mountain, rated one of the most dangerous places in the country to be when fire strikes — had caught flames. Further, while he works to lend the decades-old pub back to the community for a few more weeks, he’s still trying to convince the landlord to make the major repairs Norgrove would require to re-open it for good.

“By all means,” says the retired firefighter. “We’re going to do what we can.”