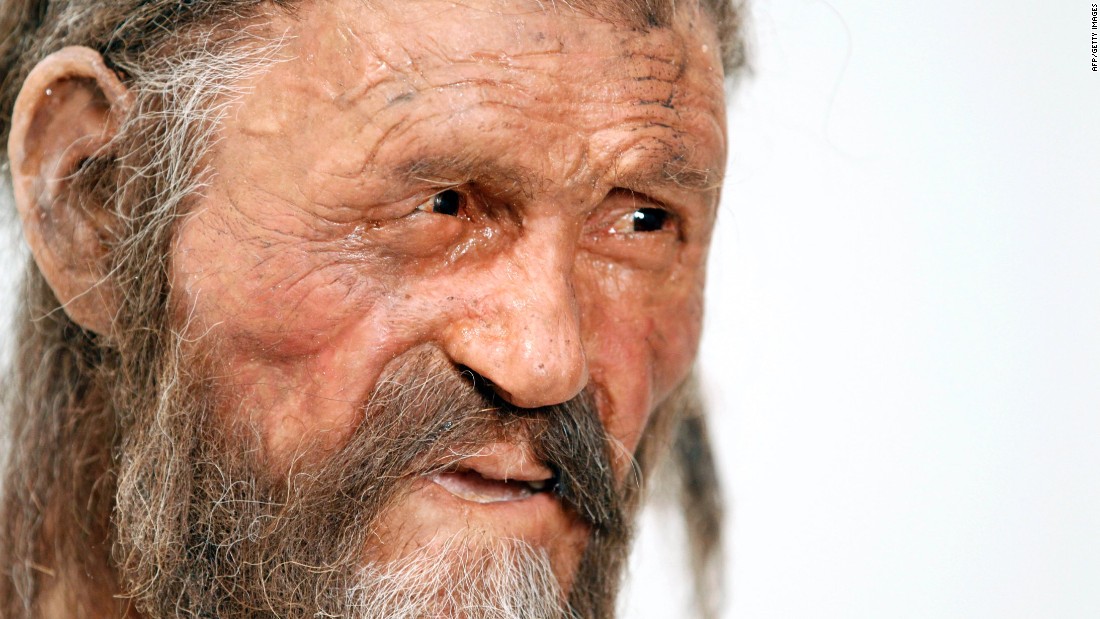 Travel
Share on Facebook
Share on Twitter
Share on Pinterest
Share on LinkedIn
Share on Facebook
Share on Twitter
Share on Pinterest
Share on LinkedIn
The latest study, published Wednesday in the journal Plos One, examined “subfossils” of pieces of vegetation that had frozen on or around the 5,300-year-old mummy, known as Otzi the Iceman.
Otzi’s body was frozen in ice until it was discovered by a couple hiking in the North Italian Alps in 1991. Since then, nearly every part of him has been analyzed — from what he may have sounded like, to the contents in his stomach and how he died. For the past 25 years, his mummified body has been a window into early human history, providing a peek into what life in the Alpine region was like during the Copper Age.
This new study offers clues about Otzi’s route up the glacier. Researchers from the University of Glasgow and the University of Innsbruck recovered at least 75 species of bryophytes, non-vascular plants such as mosses and liverworts, that had been preserved in ice with Otzi. Of these, only 30% are believed to be local to the area — meaning the rest were transported to the site of his death from elsewhere.
Researchers believe these non-indigenous plants could have been carried on Otzi’s clothing, or perhaps by the dung of large herbivores like the Alpine Ibex, a type of wild goat.
“They were recovered as mostly small scraps from the ice around him, from his clothes and gear, and even from his alimentary tract,” said Jim Dickson, one of the study’s primary authors, in a press release from the University of Glasgow.
“Those findings prompted the questions: Where did the fragments come from? How, precisely, did they get there? How do they help our understanding of the Iceman?”
Some of these foreign species were identified as mosses that exist today in the lower Schnalstal valley, in the Italian province of South Tyrol — suggesting that Otzi had traveled along the valley on his climb up the glacier, to his final resting place.
One species in particular proved significant. Flat Neckera, which grows in low-altitude woodlands, was found on Otzi’s clothes and inside his gut. This discovery is “as near proof as it is possible to get that the Iceman climbed from south to north up Schnalstal rather than ascending other adjacent valleys,” Dickson said.
These findings corroborate a 2007 study that had examined the pollen content in Otzi’s gut to reconstruct his route. The study had concluded that in his last 33 hours, Otzi had traveled from low-lying areas with “warmth-loving trees” to high-altitude zones, 3,000 meters high.
Researchers over the years have formed a “disaster” theory for his death: in this scenario, Otzi may have returned to his native village from the Alps, only to be met with some kind of conflict that forced him to flee back to the mountains, where he died.

Here’s what we know about Otzi

Since 1998, Otzi and his artifacts have been on display at the South Tyrol Museum of Archaeology in Bolzano, Italy. The Iceman was nicknamed Otzi because he was found in the Otztal Alps of South Tyrol.
Otzi lived between 3100 and 3370 BC. He stood 5 feet 2 inches (1.57 meters) tall and had a slightly muscular build of 110 pounds (50 kg), a narrow and pointed face, tanned and tattooed skin, brown eyes, long dark hair and a shaggy beard. His blood type was O-positive, and he was lactose-intolerant.
He died when he was 46 — which was considered old for the time.
Otzi was crossing the Tisenjoch pass in the Val Senales valley when he was shot in the back with an arrow by a Southern Alpine archer and became naturally preserved in the ice. The arrowhead is still embedded in his left shoulder and was not found until 2001. He would have bled out and died shortly after being shot because the arrow pierced a vital artery. There is also a wound on the back of his head, but that may have occurred when he fell after being struck by the arrow.
A cut on his right hand, indicating hand-to-hand combat, never had a chance to heal before he died. This means that conflict happened before he was shot, perhaps hours or days before, and may have led to the second clash that killed him.
The injury to his right hand would have made it difficult for Otzi to prepare his weapons for another attack. This is most likely why the bow and arrows found with him were unfinished: to replace ones that were lost or damaged in the previous fight.
He was also found with a valuable copper ax, which could have functioned as a weapon and tool, as well as a status symbol.
His clothing was made from leather, hide, braided grass and animal sinews, which would have kept him warm in the cold, wet climate.