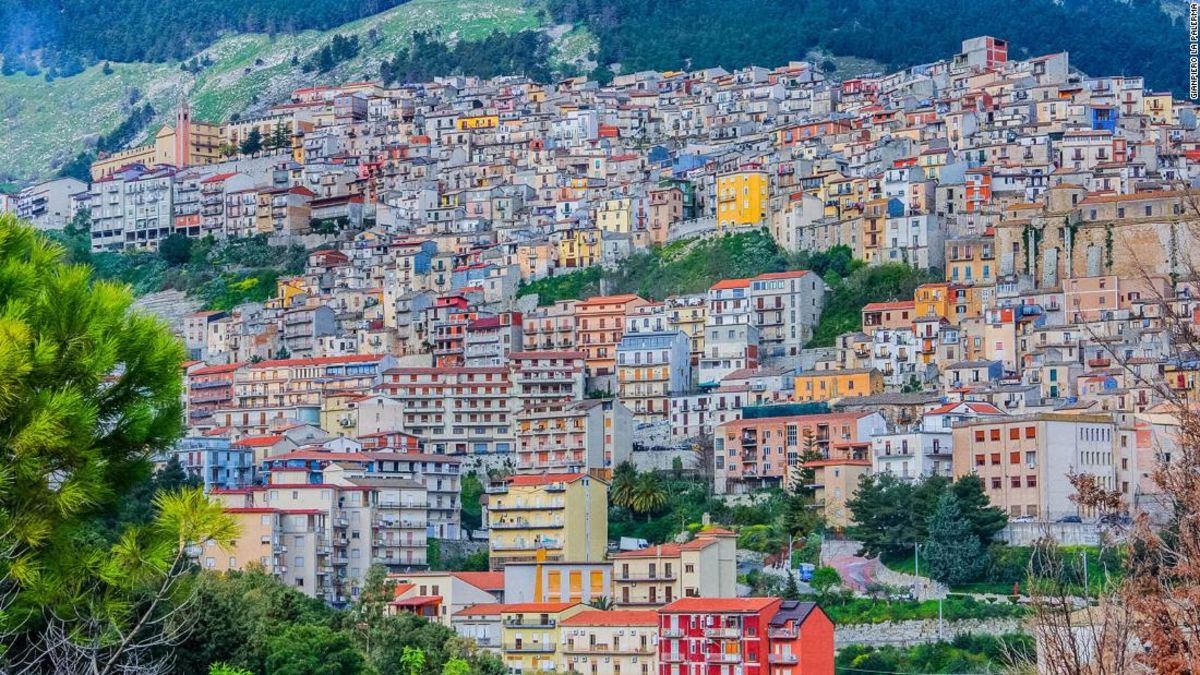 (CNN) — Over the past few years, numerous towns in Italy have resorted to selling homes for just over a dollar in a bid to revitalize their dwindling communities.

Zungoli near Naples and Sicily’s Sambuca were the most recent Italian destinations to get in on the act, launching schemes promoting dilapidated properties for just over a dollar with the hope of attracting new residents.

Now, the Sicilian town of Cammarata has gone one step further — offering homes for absolutely nothing.

Desperate to save his hometown from depopulation, mayor Vincenzo Giambrone has spent the last three years convincing owners who’ve long abandoned their family homes to hand over the empty, crumbling buildings to newcomers for free.

“I can’t stand to see this gorgeous, old historical center empty and turn into a ruin. It hurts me,” Giambrone tells CNN Travel.

“The owners are oblivious to the damage they cause when they ditch their homes and refuse to restyle their ancient dwellings. It leaves a deep scar on the townscape with the risk of dangerous collapses.”

According to Giambrone, there are roughly a dozen empty stone buildings available at present and “more to come shortly.”

And with at least 100 other abandoned homes, all located in Cammarata’s most ancient part, with the potential for rescuing, Giambrone has high hopes for the scheme.

“Now new buyers can finally step in to secure these crumbly walls and revive the historical area,” he adds.

Understandably, there are a few conditions to Cammarata’s “free” homes scheme.

Cammarata is filled with declining homes abandoned by owners.

Buyers must commit to renovating the property within three years of the purchase and pay a 5,000 euro ($4,300) deposit, which will be returned once the work is complete.

They will also need to present a clear refurbishment proposal for the property in question.

While all potential buyers who meet the criteria will be considered, young couples with children will receive priority — couples who move there and go on to have a baby even receive a 1,000 euro bonus.

New owners can transform the multi-story buildings into a private house, B&B, hotel, shops or even a restaurant.

Giambrone’s main concern is that the town “goes back to being a lively, vibrant place.”

Cammarata is part of an elite group of authentic Italian villages fighting against decline and to preserve traditions.

Positioned about 60 kilometers southeast of Palermo, it was once a “lively, vibrant place,” says Giambrone.

But the historic town has lost a large number of residents over the years, and many of its homes lie abandoned today.

Set at an elevation of around 1,000 meters, it’s based in Sicily’s wild south eastern area, renowned for its sleepy villages and slow pace of life.

Founded by the Byzantine Greeks, the town’s name comes from the Greek word “Kàmara,” which means “vaulted room.”

“It’s a unique location,” says Enzo Li Gregni, head of the tourist board for Cammarata and part time tour guide.

“Cammarata is known as ‘the town with 1,000 balconies to the East,’ as each window here basks in sunsets and you can enjoy spectacular views of Mount Etna,” he adds.

“When the volcano erupts, we see the sciara red lava flow and the rising smoke.”

The town is filled with reddish stone dwellings with panoramic balconies and bright walls, along with a few lavish aristocratic palazzos.

Its many green fields are dotted with grazing sheep and former agate stone and salt mines, while its surrounding fertile hills were once used to breed and train horses competing in the Olympic Games.

One of the biggest streets here is Strada Carrozza or Carriage Road, made of flat shiny river stones, which measures about 1.7 meters and leads up to the overhanging castle ruin.

Brazilian-Italian Jose Augusto Manetta Ramos, a businessman based in the UK, is among those who’ve been tempted by the prospect of owning a home here.

“I’ve visited other villages selling one euro houses in central Italy but I want a warmer place,” he says.

“Cammarata is stunning, the green landscape, the sea and mountains are both nearby just like the Valley of the Temples [an archaeological site in Agrigento, Sicily] and other great spots. It’s a perfect retreat.”

If Ramos does opt to purchase one of the properties, he aims to spend weekends or even months at a time in Cammarata.

Potential newcomers are likely to be welcomed with open arms, as the town’s locals are renowned for their hospitality.

In fact, Cammarata’s official symbol is a woman breastfeeding two serpents while she places her foot on her own child.

“This embodies our culture of welcoming with open arms all foreigners and outsiders,” says Giambrone.

“Visitors and guests come first, even before our own family. Newcomers trigger change, innovation, new ideas. They revamp the local economy and can kick start a revolution.”

“A local proverb goes ‘a tavula è na trazzera’, meaning the table is a sheep trail where all wayfarers are welcome to sit and enjoy the great food.

“In the old days, farmers from nearby towns moving to Cammarata to collect wheat were hosted and fed by local families.

“That’s still our spirit. When teachers and policemen are transferred here, they don’t want to leave.”

Cammarata is one of several authentic Italian villages fighting against decline.

But while residents may embrace tourists and newcomers, the same can’t be said for those from certain neighboring towns.

Locals have been embroiled in long running feuds stemming from “campanilismo” — an exaggerated pride and affection for one’s local area, which has resulted in rows over everything from the address of a house to the name of a road.

Cammarata is attached to San Giovanni Gemini, which is a much newer town. One particular road here has two different names depending on which town you’re standing.

Several houses have been accidentally built along the “border” so the kitchen is in Cammarata and the living room in San Giovanni.

Both towns recently voted against a fusion.

As it snows in Cammarata a few times a year, unlike most Sicilian spots, the area is something of a haven for trekking enthusiasts, offering a refreshing alternative to the hot summer months.

Some of the families here have even worked as “nivaroli” snow-collectors to make sorbetto, gelato and granita, a dense hybrid between ice cream and a slush served solely in its original “purist” lemon flavor.

Giambrone swears the fresh sheep milk ricotta produced in the area is among Sicily’s best, “a special cream that will make you faint.”

This cuisine boasts strong starters with tripe, lamb interiors, sweet and sour caponata veggies with pine nuts and almonds, and sanguinaccio salami made with pig blood, believed to be an aphrodisiac.

“Sanguinaccio can be quite heavy to digest but it’s a delicious niche product for fine palates,” says Giambrone.

Although Cammarata barely has 6,000 residents, there are more than a dozen churches in the area.

Hundreds of pilgrims gather in Cammarata each year walking along a 160-kilometer-long spiritual trail from Palermo to Agrigento.

During the town’s spectacular Easter festival men dressed in white hoods and women wrapped in black clothes parade through the town carrying the statue of a bleeding Jesus.

Meanwhile, a piece of St. Joseph’s cloak is kept as a relic in the main chapel.

The town offers many long-running stories of supposed miracles, such as people surviving dramatic falls from the castle walls, along with reported sightings of the ghost of a fiery nun who stood up against anti-clerical invaders and is said to haunt the town hall building.

While many residents have long left Cammarata behind, those who’ve stayed have largely been rewarded with longevity.

In fact, the town boasts Sicily’s highest number of centenarians, according to locals.

This is credited to its mild climate, the fresh air of the Monte Cammarata natural reserve and local food.

All families have a tiny patch of land with an olive grove and vineyard to make oil and wine for domestic use.

“Each year four to five over-100 birthdays are celebrated and there’s this one old guy who every day, after lunch, hops on his Vespa and tours the hills,” says local reporter Francesco Lopresti.

“Fitusa,” the healthy, sulfurous and smelly water that springs from underground is also thought to play a role.

Once used inside thermal baths, many believe it can heal skin diseases such as psoriasis and some locals still bathe in it occasionally.

Silvia Marchetti is a Rome-based freelance reporter. She writes about finance, economics, travel and culture for a wide range of media including MNI News, Newsweek and The Guardian.