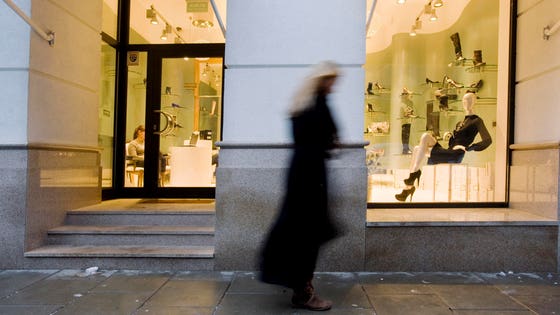 Patrice Louvet, chief executive of designer label Ralph Lauren, wants the luxury brand to know how to reach consumers like his 19-year-old daughter.

“She discovers brands on Snapchat, Instagram and TikTok,” Louvet said at the WWD Apparel + Retail CEO Summit in New York this week. “She is different from prior generations. We have to be in touch with these platforms and to engage with customers like (her.) …. There’s clearly a disruption in the way consumers are interacting with brands.”

In August, Ralph Lauren, in a move Louvet described as the first among luxury companies, unveiled an ad campaign on TikTok, the short-form video app popular with Gen Z. In late October, the designer introduced a curated collection of vintage items through a collaboration with Depop, a fashion resale app “with the cult Gen-Z following,” in the company’s words.

“We want to be where our consumers want to shop us, from brand engaging standpoint to talking in the way they want to be talked to,” said Louvet, who took the helm at the fashion house in 2017 after a 25-plus-year career at consumer products giant Procter & Gamble.

Why is that crucial? Ralph Lauren has identified “the new generation of consumers” as one of its key five growth strategies.

And it’s not alone.

“The wave of millennials has arrived,” said Alessandro Bogliolo, Tiffany & Co. CEO, at the conference. “The old way of applying the rules of the books …. have to be challenged and disrupted.”

Thanks to the rise of direct-to-consumer rivals like Stitch Fix, which touts its data science can better deliver what customers want, and changing consumer behavior led by millennials and Gen Z, the traditional fashion industry has been among the worst hit in the retail sector.

Department stores sales, for example, have dropped 4.8% the first nine months of this year, the worst-performing segment, in contrast to a 3.4% increase across the entire retail and food service industry, according to the U.S. Commerce Department. Discount fashion chains Forever 21 and Charlotte Russe and high-end retailers Diesel and Barneys New York have filed for for bankruptcy this year.

“Barneys serves as an example of how tough it is out there,” Helena Foulkes, CEO of Saks parent Hudson’s Bay Company, said at the two-day event.

Foulkes, a 25-year veteran at CVS Health before joining Hudson’s Bay last year, said she has met with all of Saks’s top suppliers to learn how Saks can become “more fashion forward.” The luxury department store chain also has doubled its personal stylist team to 4,500 and has renovated its New York Fifth Avenue flagship, including this year’s opening of a two-story L’Avenue restaurant, in an increasingly familiar pattern in the industry to use food services to attract visits.

“It speaks to the power of experience,” Foulkes said, adding Saks’s various moves have paid off and helped it win market share.

As the fashion circuit laments the demise of the likes of Barneys New York, those that still remain continue to wrestle with how to appeal to the younger shoppers who are less brand loyal than ever and increasingly choosing to spend with brands they see as having similar social-conscious values.

That’s not to mention the fact the industry itself has lost some of consumers’ wallet share to new iPhones and other tech gadgets as well as to travel and other experiences that consumers want to brag about on social media.

“We have a significant case of anxiety and FOMO (fear of missing out) about where customers are going,” Jamie Nordstrom, Nordstrom’s president of stores, said at the WWD summit, which gathered top executives from both the traditional giants and upstarts like Stitch Fix. “Shopping has to be more than about a list of things to buy. It has to be about an experience.”

A case in point, the cocktail bar in the middle of shoe department at Nordstrom’s one-week-old New York flagship has performed better than Nordstrom expected. As Nordstrom expects online to eventually rise to half of its business from 30%, it’s also allocated some of its “traditionally highly productive” first-floor space for express online pickups and returns and alterations, he said.

“It’s clear customers are saying this is important to me,” Nordstrom said.

For the employees too. Ralph Lauren’s Louvet said when he meets with employees worldwide, the first question he often gets from them is what the company is doing about sustainability.

Another trend: shoppers are less willing to pay full price, he said.

That’s expected to bode well for off-price retailers like T.J. Maxx parent TJX and New York’s Century 21 stores. To capitalize on increased consumer demand, Century 21, which sells brands from Burberry to Skechers at a discount, on Friday opened its first-ever pop-up shop in New York’s busy Herald Square area, three and a half weeks after it signed the lease. What was there before? Bankrupt Forever 21.

“We are experimenting and getting out of our comfort zone,” co-owner Isaac Gindi told me at an event previewing the shop that’s opening throughout the holiday season. “Retail is very challenging today. What I knew 30 years ago or even last year, throw into garbage. You got to change. What’s the key? You got to follow the young people. (They) set the trends.”

Related on Forbes: More consumers want sustainable fashion, but are brands delivering it?