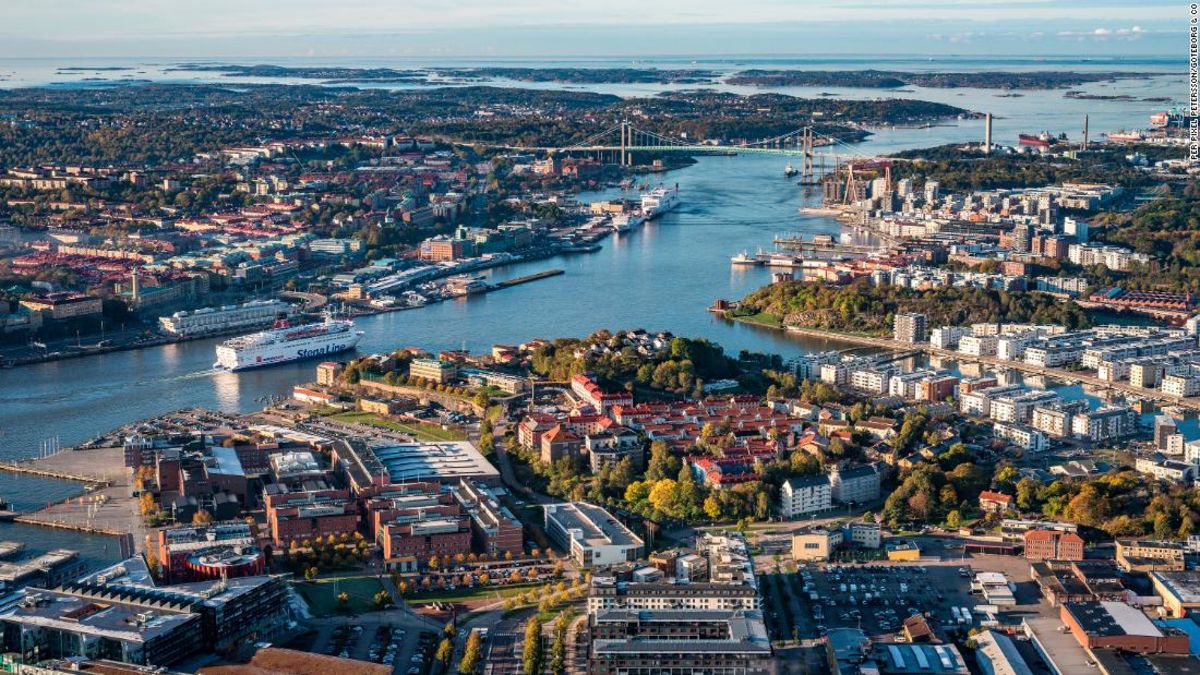 Gothenburg, Sweden (CNN) — Halfway between Copenhagen and Oslo, on a rocky Swedish coastline, lies the largest non-capital in the Nordics.

Gothenburg has always played second fiddle to its big sister Stockholm. Historically seen as a lesser city — more Volvo-industrial Sweden than sexy Spotify Sweden — this salty seaport has spent the past few decades completely reinventing itself after the collapse of its vital shipbuilding industry in the 1970s.

The Gothenburg of 2019 is a place where an old warehouse might be reborn as a food market, a boiler house as an art gallery and a slaughterhouse as an urban winery. The guts of its grittier past are now canvases on which to paint new ideas.

The city does retain some of its industrial roots, but it’s also a youthful university town, a high-tech research hub and, most importantly, a leader in sustainability whose population is expected to balloon by a third over the next 15 years thanks to its increasing allure.

Perhaps it’s little surprise the nation that gave the world Greta Thunberg is at the forefront of sustainability. But this is one arena where Gothenburg truly outshines the Swedish capital.

Liseberg theme park’s rides and attractions are all powered by renewable wind energy.

The Global Destination Sustainability Index has named Sweden’s second city the world’s most sustainable destination (just ahead of neighboring Copenhagen) every year since 2016. In fact, it’s so far ahead of everyone else on the list that it ranks a full 22 percentage points higher than the city in 10th place (Brussels).

Despite the superlatives, Katarina Thorstensson, head of sustainability at tourism board Göteborg & Co, says “we try not to rub the word sustainability in peoples’ faces, but rather communicate it in the atmosphere.”

“To us, sustainability is very much about making a livable and a lovable city,” she explains. “If the people of Gothenburg like living here, then other people will probably like to come here, too.”

Gothenburg is a green city, in part, thanks to its closeness to forests and parks, but also on account of its compact layout and plentiful public transportation, 65% of which runs on renewable energy.

Its Landvetter Airport has held the highest level of Airport Carbon Accreditation (Level 3+) since 2011, which means the airport itself is carbon neutral. Meanwhile, the local government has pushed hard for eco-innovation ever since 2013 when Gothenburg become the first city in the world to issue a green bond for investments benefiting the environment and climate.

So what does all of this eco-mindedness look like in practice? Here’s how you can eat, drink, sleep, shop and explore the greener side of Gothenburg.

Jubileumsparken features a free public sauna with changing facilities made from recycled bottles.

Gothenburg claims an astounding 274 square meters (2,950 square feet) of green space per citizen. That translates to loads of urban parkland to visit on a (not so rare as you’d think) sunny day.

Vast Slottsskogen is ideal for serene forest walks, while Keillers Park offers hilltop strolls and soaring views over the bustling harbor. Sinewy Kungsparken is the most central of all. It forms a green girdle around the heart of town, lying on land that once held ramparts protecting Gothenburg from pesky Danish invaders.

Jubileumsparken is a new urban park in the Frihamnen area, just across the river from the city center, that reflects another local priority: accessibility.

Anyone can come here to swim in the public pool, bathe at a city beach, grow food in the urban garden, try out roller derby or sailing, or just relax by the water — all free of charge. There’s also a highly Instagrammable (and free to use) public sauna whose changing facilities were made from 12,000 recycled bottles.

If theme parks are more your speed, Liseberg boasts more than 40 rides and attractions right in the heart of Gothenburg that are all powered by renewable wind energy. The pendulum-like thrill ride Loke even generates its own electricity during its powerful deceleration, which is then fed into Sweden’s national grid.
Beyond parks, Gothenburg boasts an extensive network of cycle paths, as well as a bike share program, Styr & Ställ, where the first 30 minutes of use are free. Visitors can grab some wheels and pedal west along the water to Röda Sten, an alternative art center spread across four floors of a 1940s-era boiler house.
Next, pedal to the self-consciously cute shopping and café quarter Haga to shop for slow fashion at stores like Thrive, which showcases 45 brands that promote living wages for workers, innovative and toxic-free materials and quality before quantity. Gothenburg is also home to the global denim brand Nudie Jeans, whose pants are made with 100% organic cotton and come with the promise of free repairs for life.

Where to eat and drink

Taverna Averna sources organic produce for its creative thin-crust pizzas and salads from its rooftop garden.

If Swedes have one national obsession it’s fika, which translates to “a cake and coffee break” but is so much more than that in reality. Fika is a daily social ritual, an attitude and a Swedish state of mind. It’s also a delicious injection of caffeine and sugar that keeps the country running.

The best place to experience fika is Da Matteo, a beloved bakery and coffee roastery on trendy Magasinsgatan, whose seats sprawl across an outdoor patio lined in street art. Da Matteo promotes a better coffee culture by sourcing its beans from producers who care not only about quality, but also the health of the farm and livelihood of workers. Its beyond-Fairtrade espresso, V60 and Chemex brews all go down smoothly with a fragrant kardemummabullar (cardamom bun, the cinnamon bun’s spicier cousin).
Gothenburg is brimming with dining establishments certified by regional organizations like Krav (which looks at animal care, pesticide-free farming and social responsibility), Swan (which examines the environmental impact of products and services from cradle to grave) and MSC (which assures sustainable fishing practices). Look for the labels on menus as you stroll around town.
Of course, doing good can also taste good. Krav-certified Taverna Averna sources organic produce for its heaving salads and creative thin-crust pizzas from its rooftop garden and has a standout list of all-organic wines for pairing. Nearby in the happening Linné area of town, the hip theater-bar Folk serves natural wines alongside an innovative pescatarian menu (think seasoned cod with celery roots, fennel and lemon butter), moody red lighting and pulsating Swedish electropop.

Wherever you go, briny crustaceans like crayfish and lobster from the nearby Bohuslän Coast are your best bet for true locavore cuisine. The critters are so fresh here you only need lemon and butter for seasoning.

A quick trip outside the city is necessary to enjoy Edible Country, a new concept from the Swedish tourism board that aims to transform the forest into a DIY gourmet restaurant. Book online and you’ll receive directions to an al fresco picnic table, recipes crafted by a Michelin-starred chef and tips on how to forage the mushrooms and other ingredients. There are three tables near Gothenburg, the closest of which is at Gunnebo House and Gardens, just 30 minutes from the city by public transportation.

Hotel Eggers gets its electricity from its own wind turbine off the coast.

A staggering 92% of all accommodation options in Gothenburg are eco-certified by regional sustainability organizations, so you can sleep easy knowing that your hotel is doing its part.

The 1,200-room Gothia Towers is the largest hotel in Europe with a “very good” rating from Breeam, the world’s leading sustainability certification.

This glittery highrise hotel by Liseberg not only receives its energy from wind power, but also recycles 94% of its waste (leftover food goes to a local charity, while scraps are converted into the biogas fueling ovens in its five restaurants).

Its luxury wing, Upper House, has 100,000 bees in hives at its rooftop garden, which also provides many herbs and veggies served at its one Michelin-starred restaurant. The Fairtrade coffee served at the panoramic 25th floor breakfast hall comes from a local roaster, the eggs from nearby chickens and the dairy from organic farms on the horizon. The idea is that you can gaze out the wall-to-ceiling windows across greater Gothenburg and see where your food comes from as you devour it.
At Central Station, the Clarion Hotel Post also has an organic vegetable garden on its roof (fertilized by hotel food waste), while Swan-certified Hotel Eggers balances its status as the third-oldest hotel in Sweden (parts of the building date back to 1820) with policies that are anything but antiquated. The elegant, antique-filled property derives all of its electricity from its own wind turbine off the coast, and it also cuts waste by offering unsold meals as takeout dishes for 50% off on a food rescue app.
Mark Johanson is a freelance journalist based in Santiago, Chile. His writing has appeared in Lonely Planet, Men’s Journal, GQ, Newsweek and The Guardian, among others. You can follow him on all social channels @MarkontheMap.
This article was originally published by Cnn.com. Read the original article here.
Share on Facebook
Share on Twitter
Share on Pinterest
Share on LinkedIn