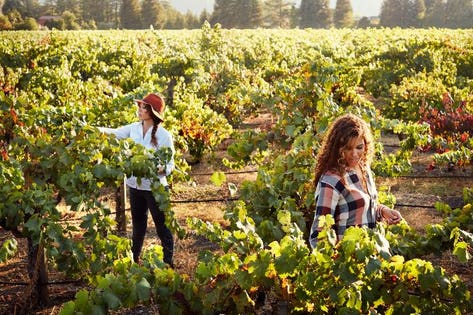 When asked to describe the current state of black women’s representation in the wine industry, Robin and Andrea McBride know exactly how to respond. The sisters, cofounders and winemakers of the California-based McBride Sisters Wine Collection, immediately point to a wine industry magazine cover that featured 50 industry leaders. Not a single one is a black woman.

“In one shot, it’s a very good representation of the lack of diversity in the industry,” says Andrea.

Wine consumption in the U.S. is higher than ever, but despite efforts to promote inclusivity among consumers (like the popular #YouCanSipWithUs campaign on Instagram), the needle hasn’t moved much at all for black women working in the wine world. Ninety percent of the wine produced in the U.S. is made in California, but only 10% of the state’s wineries are led by a female winemaker—and the number is much less when it comes to black female winemakers. When it comes to Michelin-starred restaurants, precisely none have a black woman operating a wine program or working as a wine buyer.

Recently, however, black female vintners, sales reps, educators and writers—and their allies—have made it their mission to amplify their numbers in the industry. And in light of events like a 2015 lawsuit involving a group of predominantly black women that were kicked off the Napa Valley Wine Train after being accused of being too loud and disruptive, many of these wine professionals have been leading their own wine seminars, tours and one-on-one consulting to help establish a pipeline of diverse wine knowledge in the black community.

“Women of color have more of a challenge number one because nobody expects them to know much about wine,” says Mac McDonald, president of the Association of African-American Vintners (AAAV). “But we’re not about getting together and just drinking; we’re about education.”

The AAAV is still small—it only has 18 members (and anticipates to have 30 total members by 2020), of which just seven are women—but the fact that it exists is an improvement. Before it was founded in 2002, there was no such association for black winemakers. Members, including Robin and Andrea McBride, are trying to further the organization’s mission by spearheading their own educational initiatives. The sisters announced their inaugural self-funded scholarship fund this month, which is awarding a total of $37,500 to 12 female recipients, all in the early stages of their career, in amounts ranging from $1,000 to $5,000 with the hope of fostering career development for women in wine.

Forbes 30 Under 30 alumna Victoria James is also in on the action: she’s the cofounder of a nonprofit named Wine Empowered that’s providing tuition-free education to women and minorities looking to climb the ladder in the hospitality industry, since one of the major challenges preventing advancement is money. The initiative launched in October and will welcome 20 students in December.

“Many women and minorities working in entry-level positions in hospitality cannot afford to invest $10,000 to $15,000, which is the range of currents costs of for-profit wine education programs,” James, the corporate beverage director for Gracious Hospitality, told Forbes. (Her cofounders are colleagues Cynthia Cheng and Amy Zhou.)

Beyond the costs that often prohibit upward mobility for black women in wine, Julia Coney, a freelance wine writer, consultant and an instructor for Wine Empowered, says that women who do reach the upper echelons find their authority questioned at higher rates than their white or male counterparts. This is true when she’s just playing the role of consumer, too. “I walk into tastings almost on guard, because I can see the differences in how somebody pours wine for a man, for a white woman and for me,” she says. “A lot of times, they pour less for me—to the point where I can’t even analyze the taste.”

Theodora Lee owns and operates one of the first 100% black-owned wineries, Theopolis Vineyards, which produces 800 cases annually. She has also found that access to capital and education are major hurdles for black women—but particularly the education and mentorship piece. Most young black women “do not understand all the different opportunities in the wine industry,” she says, pointing to the fact that, to her knowledge, Brenae Royal is one of the only black female vineyard manager in the country (Lee manages Theopolis with just one other person, Leslie Stoval).

Royal is relatively new to the scene—she’s been the vineyard manager for E. & J. Gallo’s Monte Rosso Vineyard since 2015—but she’s savvy to the economic opportunity she can help unlock: the black community has $1.3 trillion in spending power. “When people are presented with a product they connect with and that is accessible to them, they are going to be more willing to purchase it,” she says.

Despite stereotypes that paint white women as the primary wine consumer, black women are influential wine buyers. “That means that dollars are being left on the table when [they aren’t] thought of during product development or considered when developing marketing messages,” says Cheryl Grace, a consumer engagement exec at Nielsen. Nielsen’s data shows that black women are 118% more likely to have purchased Moscato in the past three months when compared to the total market, and 71% more likely to have purchased white Zinfandel. But they’re also spending more overall: Black women are 15% more likely than the total market to purchase wine that is $20 or more, indicating a preference for higher quality wines, according to Grace.

Higher quality, yes, but also a bit sweeter—a preference that has been maligned across racial lines for decades. “Our wine drinkers don’t get a lot of respect because they like sweeter or lighter wines or unoaked wines or fruit-forward wines,” notes Gwen Hurt, founder of Shoe Crazy Wines, a wine producer and distributor. “And that’s terrible, because that’s a huge [market]. We have a voice, we want to be heard.”

Hurt has seen success with solely targeting these soft-palate, predominantly female drinkers. You can find the Shoe Crazy Wines brand in Virginia- and D.C.-based Costco’s; they’ll also be in 125 Walmarts in Virginia, North Carolina and Georgia by the end of the year. “Women of color spend a lot of money on wine,” Hurt says. “We’re winos—in a good way.”

Back in August at the Brooklyn-based Afropunk festival—the annual two-day event celebrating the black community through music, food and fashion—the McBride sisters decided to bring along their new line of Black Girl Magic wines to tie into the spirit of the gathering. While all of the wines were well-received by the roughly 60,000 crowd, it actually wasn’t the sweeter-style Riesling that nearly sold out and outperformed the rest. It was the dry rosé.

“Our mission is to overserve the underserved,” says Andrea. “Black women are a large demographic that is overlooked, so we just have to bring way more in so that it doesn’t seem abnormal anymore.”