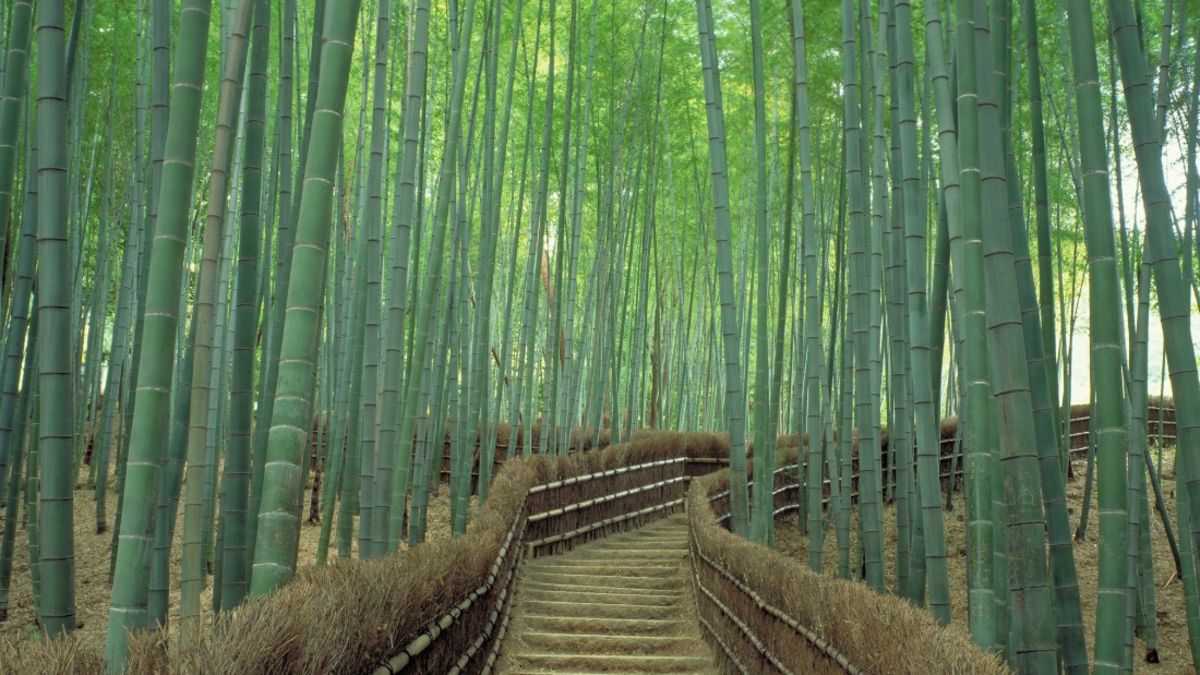 Kyoto, Japan (CNN) — In Japan’s Sagano Bamboo Forest, on the outskirts of Kyoto, towering green stalks of the famously versatile plant sway in the wind, creaking eerily they collide and twist, leaves rustling.

The sun filters through the densely packed grove, projecting thin slashes of light onto the dozens of camera-clutching tourists shuffling down the wide trail that cuts through the middle of the forest as they awkwardly angle their shots, attempting to crop human forms out of their frames.

Long gone are the days when you’d get this place to yourself when visiting Japan.

If you’ve ever clicked on a rundown of “places to see before you die” or a list of the most beautiful forests in the world, chances are you’ve seen a photo of Sagano.

Located in the gorgeous Arashiyama district of western Kyoto, the Sagano Bamboo Forest’s popularity has expanded in recent years, coinciding with the rise in overall tourism arrivals in Japan.

Though it’s the beauty of the bamboo that brings in the masses, those distinct rustling sounds have become an attraction in their own right.

A few years ago, the Ministry of Environment included the Sagano Bamboo Forest on its list of “100 Soundscapes of Japan” — a selection of everyday noises intended to encourage locals to stop and enjoy nature’s music.

For the best experience, head out early in the morning or late evening and avoid weekends completely, when Japanese day-trippers descend on the area — especially in the fall and spring. (There’s no admission fee and it’s open 24/7.)

A ‘major’ temple and a film star’s former home

Closeup of the forest

Right outside the Bamboo Forest entrance is the northern gate of Tenryu-ji Temple, a UNESCO World Heritage Site and one of the Kyoto-gozan — five major temples of Kyoto.
This is no coincidence. In Japan, Shinto shrines and Buddhist temples are often situated near bamboo groves, which are viewed as a clever means of warding off evil, while the bamboo is seen as a symbol of strength.

Built in the 14th century by a shogun in honor of the passing of Japan’s emperor, Tenryu-ji has one of the country’s most incredible Zen gardens and is today the headquarters of the Rinzai School of Zen Buddhism.

A massive complex of gardens with plants and trees that are famed for catering to all four seasons, there’s also a temple, study, tea hut and museum highlighting the life of Denjiro.

The bamboo forest and its bookend attractions of Tenryu-ji and Okochi-Sanso Villa may be the stars of the area for international tourism crowds, but the entire Arashiyama district is worth exploring.

With its low-lying tree-covered mountains that tumble into the river, historic temples and charming streets, Arashiyama has been designated a National Historic Site and Place of Scenic Beauty by Japan.

It’s been attracting moneyed locals since the 8th century, when vacationing aristocratic families visited to check out the changing seasons’ colors and go boating on the Hozu River, which is part of Katsura River.

Today, one of the top ways to enjoy the natural beauty of the area is by hopping on the Sagano Scenic Railway — also known as the Sagano Romantic Train.

A retro-style steam train that runs seven kilometers along the Hozu River, it departs once every hour from the Sagano Torokko Station — a short walk from the JR Arashiyama Sagano Station — daily from 9 a.m. to 5 p.m., except Wednesdays. (The train shuts down from December 30-February 28.)

Afterwards, many opt to hop on the bus that connects the train station to the river, where Hozu River Boat Rides depart for the two-hour, 16-kilometer trip from Kameoka back to Arashiyama.

On land, bike rentals are among the best ways to explore Arashiyama’s web of temples, shrines, restaurants and gift shops.

The area’s main icon, however, is the Togetsukyo Bridge (Moon Crossing Bridge), which flows over the Hozu River.

Here, Japanese tourists can be seen posing for photos while dressed in colorful kimonos — a nod to Kyoto’s status as the cultural capital of Japan.

After all that touring, a pit stop at one of the many soft-serve ice cream stands is a fine way to end the day — the vanilla/green tea twists are particularly addictive.

The Iwatayama Monkey Park is home to over 100 Japanese macaques.

The Arashiyama crowds can get overwhelming, but the fantastic Otagi Nenbutsu-ji Temple is oddly overlooked by most tourists as it’s a bit more remote than most of the district’s attractions.

About a 30-minute walk from the Sagano Bamboo Forest, it features over 1,000 little stone rakan (statues of enlightened ones) made from 1981 to 1991 during the reconstruction of the temple.

Some laugh joyfully. Most pose serenely, covered in a green layer of moss.

The odd one holds a tennis racket.

On weekdays, the lovely uphill walk from the Sagano Bamboo Forest to Otagi Nenbutsu-ji is also surprisingly tourist-free yet full of unique gift shops — including one owned by an artist who creates his works out of silk worm cocoons — as well as a massive traditional torii gate, tea rooms and private residences.

For something a bit more lively, up on Mount Arashiyama sits the Iwatayama Monkey Park, home to some 100 Japanese macaques.

What’s great about this place is that it’s the humans who are in the cage, and the monkeys — which you can feed — on the outside.

What to eat and where to stay

Breaking into the ancient, very closed world of Kyoto’s “ryokan” — traditional Japanese inns — is hard enough. But when you have a maverick chef and a company which just entered the market six years ago, the odds increasingly become stacked against you.

Given the crowds, we recommend spending the night in a local ryokan (inn), which will allow you to get to the bamboo forest at the crack of dawn before all the central Kyoto and Osaka daytrippers move in.

After dark, the streets are empty of tourists though bear in mind many of the shops and restaurants close their doors shortly after sunset too.

The top hotel in Arashiyama is riverside luxury ryokan Hoshinoya Kyoto, which can only be reached by ferry, but there are a few other more wallet-friendly options too.
These include the lovely three-star Japaning Hotel LiV Ranroukaku, which is just steps away from the Monkey Park and offers traditional Japanese rooms overlooking Togetsukyo Bridge.

The main streets of Arashiyama are lined with restaurants serving local specialties — again, many of these close shortly after sunset.

Steak Otsuka, for instance, is only open for lunch. It’s a bit of a hassle to get into — reservations aren’t accepted and you have to show up early to put your name on a list — but well worth the effort for its delicious cuts of wagyu beef steaks.

For private tours of Arashiyama, Virtuoso-affiliated Windows to Japan offers an excellent western Kyoto itinerary that includes the highlights of the area.

This story was originally published in August 2014 and updated in November, 2019.