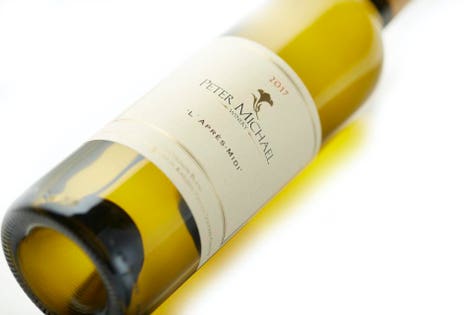 Pairing wine and food doesn’t have to be difficult, but it can occasionally be intimidating. And in an eclectic, energetic, often experimental culinary culture like America’s in 2019, figuring out which wine to serve with a particular dish can make otherwise confident, well-versed wine drinkers uncharacteristically cautious.

Which is why I’ve become such a fan of the set-menu dinners that restaurants increasingly host in collaboration with winemakers: They not only provide the restaurant with an opportunity to show off their creative and technical skills in the kitchen, but also for the wines to be enjoyed alongside flavors and textures that more cautious consumers might not be confident enough to attempt on their own.

Which is why my two Wines of the Week today have been inspired by a couple of notable wine dinners around the country right now that seem to be getting to the heart of what makes these events to important.

The Peter Michael “L’Après-Midi” Estate Sauvignon Blanc 2017, my featured white wine today, is a marvel: Rich and generous, with aromas of guava, quince, mashed pears, fennel bulbs, and a slightly leesy sense of creaminess. It’s a generous wine with a subtly savory element that follows through to the palate, where hard pear flavors are joined by slate and gunflint: This is clearly a wine to savor, generous yet taut and zipped through with acidity, and boasting a structure that will carry it forward for another decade.

It’s so well structured, in fact, that it has the ability to pair with a broad range of dishes, even those with a fair amount of fat and richness that require a more assertive wine to cut through it. Later this week, on Friday the 8th, Davio’s Northern Italian Grill will be hosting a Peter Michael wine dinner at their Irvine, California location at which this gem will be paired with butter poached lobster tails, confit leeks, and caviar mousse. It’s a fascinating pairing, and not one that many Sauvignon Blancs would be able to handle, but the concentration and breadth of the Peter Michael “L’Après-Midi” will work wonders alongside the sweetness of the lobster, the savoriness of the caviar mousse, and the aromatic complexity of the leeks. And because of its perfectly calibrated acidity, it’ll serve as an excellent counterpoint to the creamy and meaty textures.

My red Wine of the Week, the Siduri Santa Barbara County Pinot Noir 2017, wasn’t itself used in the recent wine dinner held at Cinder House at the Four Seasons Hotel St. Louis with winemaker and Pinot Noir legend Adam Lee, but three of his other Pinots, from Clarice Wine Company, were. Alongside the dry-aged American wagyu with maitake mushrooms, bone marrow, and black garlic, guests sipped Pinots from two single vineyards in the Santa Lucia Highlands and one whose fruit came from throughout the appellation.

Access to Clarice Wine Company’s Pinots is limited to members, but Lee’s wines from Siduri are widely available, and also representative of the heights that Santa Barbara County Pinot can attain. This 2017 Pinot Noir, with its aromas of bright cherries and raspberries, and flavors of wild strawberries anchored by more savory notes of blood-orange pith and tobacco leaf, would also have worked brilliantly alongside that beef at Cinder House, and sparkled next to the black garlic and marrow.

The old advice of pairing red wine with meat and white wine with fish no longer applies as universally as it once did: Depending on the seasoning, the sauce, the cooking method, and a thousand other variables, there are infinite opportunities at the table to enjoy a pairing that might break from the received wisdom of the past. Wine dinners like these are a great opportunity to do so, and bottles like the Peter Michael “L’Après-Midi” Estate Sauvignon Blanc 2017 and the Siduri Santa Barbara County Pinot Noir 2017 are delicious, versatile gems to enjoy alongside a far greater range of foods than might initially seem possible.

Rich and generous, with aromas of guava, quince, and a slightly leesy sense of creaminess, joined by mashed pears and fennel bulb. There is a savory element to this, too, which follows through to the palate, where a slightly saline edge to the hard pear flavors are joined by slate and gunflint: This is clearly a wine to savor, generous yet taut and zipped through with acidity, and boasting a structure that will carry it forward for another decade. SRP: $64

Bursting with bright, fresh cherries and raspberries as soon as you pour it into the glass, this is a silky and vivacious Pinot Noir with just enough of a savory edge—blood-orange pith, wild strawberries, tobacco leaf—to work beautifully alongside a broad range of foods. There’s energy to spare here, but never at the expense of depth. And at less than $35, this is a steal. SRP: $34