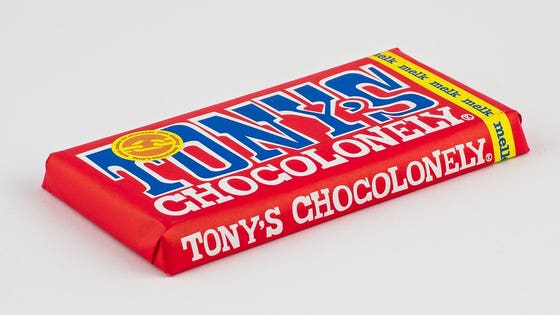 Tony’s Chocolonely is a Dutch chocolate manufacturer producing wildly exotic chocolate with flavours like “dark milk pretzel toffee,” “white raspberry popping candy” and, my favourite, “milk caramel sea salt.” They are not an ordinary chocolate producer. Their primary goal is not financial success. As it says on every chocolate bar, their goal is “towards 100% slave free chocolate.” This is why Tony’s Chocolonely was founded and this is what drives them. How do they do this and what can others learn from them?

The history of Tony’s Chocolonely is remarkable. It started in March 2004, when Dutch journalist Teun (Tony) van de Keuken scrutinized the chocolate manufacturing industry and found out that there was not a single brand producing slave free chocolate.

To raise attention to the issue he took himself to court for knowingly purchasing illegally manufactured chocolate. The case was dismissed, but it planted the seed for the idea of producing slave free chocolate himself. And so it happened. On 9 November 2005 the first Tony’s Chocolonely chocolate bars are on the market: 5,000 milk chocolate bars in an alarming red package carrying the label “100% slave free.”

With a turnover of €70 million, Tony’s Chocolonely is now the biggest chocolate brand in the Netherlands with a market share of around 19% and growth of 27% compared to last year. 88% of their sales is in the Netherlands, but they are aggressively expanding and currently present in Belgium, Denmark, Germany, Finland, Sweden, the U.K. and the U.S. Until last year, they were profitable too, even though they will see a significant loss this year because of this aggressive expansion.

This is a remarkable success story. Starting as a journalistic statement, Tony’s Chocolonely is now both the most sustainable and largest chocolate brand in the Netherlands. So, what is their strategy and what can others learn from them?

There are clearly two ingredients in Tony’s Chocolonely’s strategy that make it a success. The first is their purpose. From day one on, there is no doubt about their mission. It is making the chocolate industry—and preferably the world—free from slave work. It is this purpose that draws attention and that makes it a sympathetic brand that is hard to dislike. It is also this purpose that is responsible for the success in the early stages.

But there is a second ingredient that makes their strategy a success. It is that they ignored the traditional rules of what chocolate and chocolate bars should be like. Traditional chocolate bars in the Netherlands were mostly limited to milk, dark and hazelnut variants with blue, red and green packaging respectively.

Tony’s Chocolonely changed that. By accident and ignorance they used a red package for their first milk chocolate bar. Furthermore, unlike traditional bars, their bars are divided into unevenly distributed blocks of different sizes to express the unfairness in the chocolate industry.

But most notably it is the variety of unexpected flavor combinations that makes Tony’s Chocolonely so successful. By introducing unexpected combinations such as the ones referred to above, they disrupted the chocolate market in the Netherlands—to the extend that many other brands are copying their strategy and introduce their own exotic flavours. And not only in chocolate bars, but also in chocolate paste, peanut butter and cookies.

It is this with second ingredient that Tony’s Chocolonely has reached the masses. Of course their focus on making an impact speaks to people. But it is the fact that they disrupted the industry by introducing very good tasting exotic chocolate combinations that has made Tony’s Chocolonely so successful.

What we can learn from Tony’s Chocolonely is that creating a sustainable product that makes an impact requires a strategy with two ingredients. First, there needs to be a strong and authentic drive to make an impact and solve a problem in this world. In Tony’s Chocolonely’s case this was making the chocolate industry slave free. But it can be any other mission that contributes to, for example, the 17 Sustainable Development Goals of the United Nations.

Second, there needs to be a product or service that deviates in substantial ways from the status quo. While it may not even need to disrupt the industry as in Tony’s Chocolonely’s case, it needs to be substantially different and value-added compared to what is already out there. Merely introducing a product that is more sustainable than the rest is not enough. It needs to draw the attention of the masses through other value added distinctive features.

In Tony’s Chocolonely’s case, this was not so much an intentional strategy. The original idea was not even to start a company, let alone that there was a clear strategy. Maybe they had strong intuitions, or maybe they were simply lucky by making a couple of “mistakes.” But in any case, looking back, we can see that these two ingredients were the key foundations of the strategy by which they made the impact they currently have.