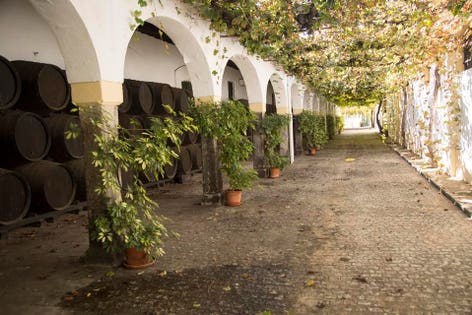 Sherry is among the most unique and diverse wines on the planet.

Spanish novelist Benito Pérez Galdós—whom many consider second only to Cervantes—once said, “If God had not made Sherry, how imperfect his work would have been.”

Now, nearly 100 years after Galdós’ death, and after a slump in consumption, more people are coming back around to the wine’s heavenly attributes. November 4-10 marked the sixth annual International Sherry Week, a showcase for the wine’s diversity of styles, flavors and uses. And up front and center this past week: the cocktail culture that helped revive the popularity of this fortified white wine.

Caitlin Laman, a Chicago-based beverage consultant, is one of many mixologists who finds sherry an adaptive mixer. “I am currently using sherry in most cocktails I make,” she says. “Its wide variety of styles allows for implementation across many cocktail categories … I love taking classics and re-imagining them into a lower-alcohol riff.”

In San Francisco, Ian Adams, general manager at 15 Romolo and founder of Merchants of Thirst, a boutique import company focused on sherry, said “having a variety of tools in our belt allows us the opportunity to bring the sherry conversation to nearly any guest with confidence.” He said he aims to “overcome misconceptions, enlighten curious guests, and ultimately find the ‘a-ha!’ sherry.”

Unique wines in a unique locale

Sherry is made in the southwestern Spanish province of Cadiz in area called the “Sherry Triangle,” formed by the towns of Jerez de la Frontera, Sanlúcar de Barrameda and El Puerto de Santa María at each vertex.

The white grapes—Palomino, Pedro Ximénez and Moscatel—may be grown anywhere in the province, but officially designated sherry must be produced, aged and bottled within the triangle.

Antonio Flores, fifth-generation master blender at González Byass (established in 1835), producer of the ubiquitous Tio Pepe sherry, says there are five pillars of Jerez, the main town in which most sherry is produced: soil, grapes, biological aging (“the miracle of our wine”), oxidative aging and the solera barrel system.

Location is key as the Atlantic Ocean, humidity and trade winds uniquely contribute to the wine’s character. Another “only in Cadiz” aspect: the chunky, chalky Albariza soil, which reflects heat and retains the moisture vines need during the dry season, acting as a natural irrigation system. “It gives life and personality to our wines,” says Flores, whose poetic flourishes enlivened his descriptions on my visit there.

And telescoping in even more tightly, the historic barns or bodegas in which sherry is aged are unique micro-environments in themselves that encourage the conditions in which the wines age. The wines are aged in a “solera,” a complex fractional blending system organized by tiers (criaderas) of barrels stacked on each other.

“We are all about protecting the yeast,” says Claire Henderson, senior brand manager for González Byass USA. She refers to “flor,” the yeast formed during the biological aging process that defines sherry’s unique styles.

The thick layer of living yeast sits on top of wine in the barrel, protecting it from oxidization. Wines produced in this way finish out at about 15% alcohol, and are light, fresh and dry, high in acid with delicate nutty and distinct saline aromas and flavors. Fino and Manzanilla fall into this category.

Wines designated for oxidative aging have a higher level of alcohol (17%), which kills the flor before undergoing controlled oxidation in large old casks. Oloroso, Amontillado, Palo Cortado, Cream and Pedro Ximénez (PX) all fall into this category, with varying hues and levels of sweetness and unique flavor characters ranging from salt caramel to nuts, figs and other dried fruits, citrus zest and umami.

Either way, all these styles—even the sweetest—have high acidity levels so the wines are balanced, rarely cloying.

Sherry made be one of the most diverse wines on the planet, for sipping or as a complement to food says César Saldaña of the Consejo Regulador, the agency that regulates the production of sherry wines. The rule of thumb with food pairing: If it swims, drink Fino. If it flies, Amontillado. If it runs go with Oloroso. But, no matter which you choose, pour it into a white wine class for full enjoyment. Here are a few to try:

Tio Pepe Palomino Fino, the signature wine of González Byass, is the hallmark of the driest style of sherry. Flores says “you can taste the rains and the winds in this wine,” and I agree. Fresh and saline, the nose expresses almonds and dried fruit. Very dry palate but round, with pleasing almond skin tartness. Drink with salted nuts, olives and jamón.

Tio Pepe En Rama is a newer unfiltered style of Fino that has similar characteristics of the signature Fino, but goes a little deeper in its profiles of almond, yeast, saline and acid Mouthwatering, textured and slightly glycerol and herbal, it’s complex and delicious. 15% abv

González Byass Alfonso Oloroso spends eight years in American oak casks after the traditional solera system. Dark amber color, this is a powerful, rich wine expressing mixed nuts (walnut and hazel), truffle, leather, a layer of vanilla and sweet spice. For me, the 18% alcohol competed with other flavors, but flavorful roasted dishes might help mitigate that.

González Byass Leonor Palo Cortado is a style that Flores calls “Jerez’s mysterious and complicated wine.” An intersection of Amontillado and Oloroso, Palo Cortado starts as a Fino, but is aged oxidatively if the flor fails to thrive. My sample was fine and elegant, with a rich, nutty aspect and reminiscent of salted caramel, and elevated by a bright citric note (20% abv) González Byass makes an aged version of this, “Anada 1991, which is concentrated and powerful but shows more brine and botanicals (21.5% abv)

Harveys Bristol Cream: Contrary to the name, this (and other similarly named) is not creamy, and falls into the category of “vinos generosis” that blends dry and naturally sweet wines (this one is 80% Palomino and 20% Pedro Ximénez). This sample is silky with dried fruit, smoky notes and hallmark salinity. 17.5% abv

González Byass Pedro Ximénez “Nectar” is true to its name. Dark brown with a smoky coffee, strong raisin nose, this is an intense concentration of rich, sweet dried fruits like figs and creamy medjool dates, along with coffee and toffee. Drink with salted caramels, blue cheese, chocolate. The 370 grams/liter of residual sugar is well balanced with acidity and fruit, it’s smooth and balanced, not cloying. 15% abv

González Byass “Noe” Pedro Ximénez is “black as night, sweet as love” says Flores. Though, I can’t speak to love, this is an opaque dark brown wine full of sweetness by way of dried dates, raisins and molasses. Luscious and decadent, but lacking the acidity to counter the slight cloying aspect. 15.5% abv