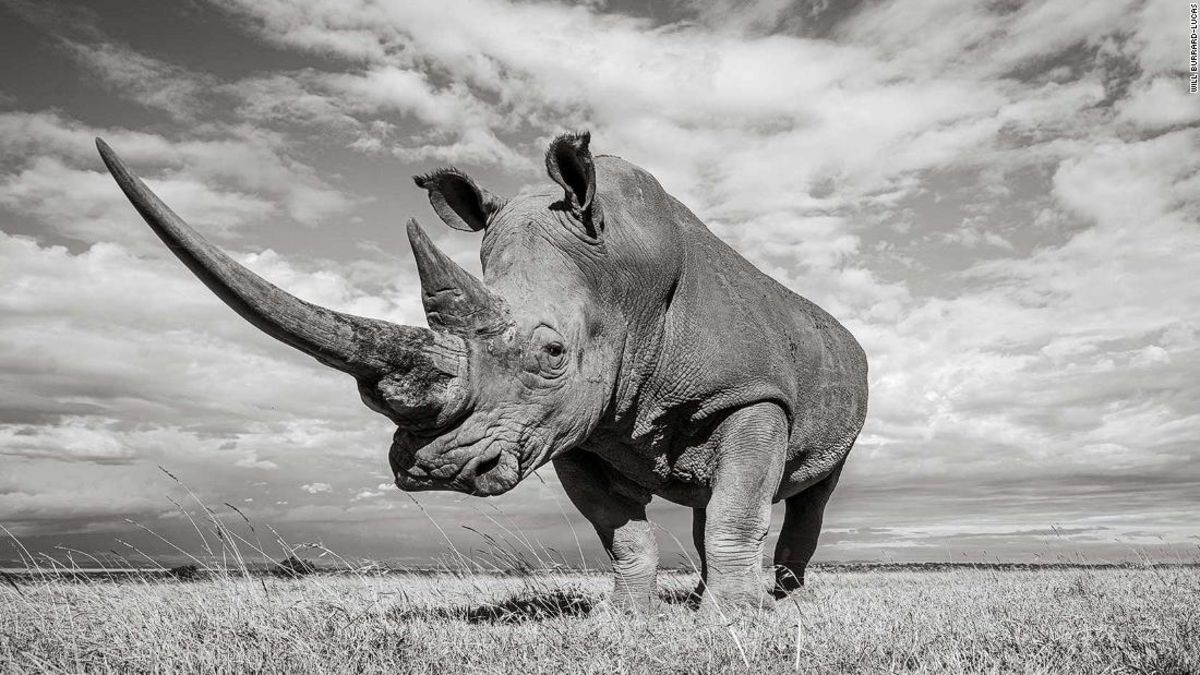 In another intimate shot, a black rhino calf and its mother are spotted feeding together, at the Lewa Conservency.

Further south in the country, in the Tsavo West National Park, a black rhino is seen grazing at night, framed by rippling hills and illuminated by moonlight.

These powerful images are some of the highlights of British photographer Will Burrard-Lucas’ latest wildlife image series.

Black rhinos photographed by Will Burrard-Lucas at Lewa Conservancy, Kenya.

Burrard-Lucas’ traveled around Kenya, using a long lens — and sometimes his self-made camera contraption called “BeetleCam” — to capture intimate, up-close shots of these endangered creatures.
Black rhinos are “critically endangered,” according to the International Union for Conservation of Nature’s Red List of Threatened Species. Southern white rhinos, introduced into Kenya to help curb risk of extinction, are “near threatened.”

Burrard-Lucas’s aim was to capture photographs of the rhinos that his conservation partners, including the Borana Conservancy, the Tsavo Trust — both Kenyan-based not-for-profit organizations — and the Zoological Society of London (ZSL) could use to advocate for these animals’ ongoing protection.

Burrard-Lucas prides himself on intimate images.

White rhinos are “quite sociable animals,” Burrard-Lucas tells CNN Travel. However he found black rhinos to be “very shy and elusive.”

These animals also prefer nighttime settings, so the photographer spent a month setting up his “BeetleCam” camera traps in the grounds of Tsavo West National Park, aiming to capture photos of black rhinos grazing and drinking.

“I worked with the conservationists to work out where to put my cameras, and then photographed these rhinos as they came to water at night,” says Burrard-Lucas.

The photographer worked with conservation groups to take the images, including this one at Solio Lodge, Kenya.

For the tender snap of the rhinos feeding at the Lewa Conservency, Burrard-Lucas crouched down beside his vehicle and used a long lens.

“It’s a very different experience being able to actually see them while I’m photographing them,” he says. “That was a wonderful experience to be able to see that calf and mother going about their daily life.”

Some of the images were captured using camera traps, others via a long lens.

Burrard-Lucas, who says his love of wildlife photography stems from time spent in Tanzania as a child, previously published striking shots of a rare black leopard and a “big tusker” elephant in Kenya.

He’s currently working on a book showcasing his photographs of black leopards, due to be published in 2020.