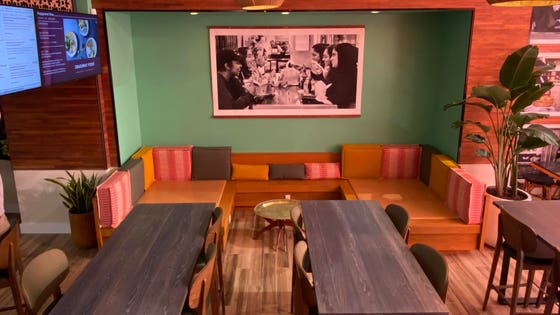 Come for the food, stay for the social impact: A new advocacy-based restaurant opened its doors in D.C. less than a block from the White House—and it wants to make supporting immigrants as easy and interactive as ordering food from a menu.

Immigrant Food is the brainchild of political activist Peter Schechter who refers to this dining concept as more “cause casual” than fast-casual. “Rather than having a great business that then gives a portion of the profits as an afterthought to a cause, our cause is baked into our business model,” he tells Forbes. “We wouldn’t function without the cause.”

Alongside the food menu featuring a fusion of 40 different cuisines from across the globe sit “engagement menus” that inform diners of the specific ways they can support any of the five immigration-focused NGOs the restaurant has as partners. They include the Asian Pacific American Legal Resource Center, Ayuda, the Capital Area Immigrants’ Rights Coalition, CARECEN and CASA.

These “menus” will change frequently, sometimes even on a daily basis, to meet the needs of the affiliated NGOs. Some are seeking translators or paralegals, while others simply need volunteers to help former immigrant detainees learn how to navigate the D.C. metro system. Diners also have the option to add a donation to their bill, which the restaurant later divides and disperses among the organizations. During off hours, the restaurant transforms into a working hub for these nonprofits to host events like English classes and job search services.

Immigrant Food’s debut, on Nov. 12, fell on the same day as another important event: the day the Supreme Court began hearing arguments surrounding President Trump’s proposal to eliminate the Deferred Action for Childhood Arrivals (DACA) program that protects immigrants who entered the United States illegally as children. Public views, however, seem to be shifting in a positive direction when it comes to immigration: 75% of Americans think it’s good for the country.

“As our country has become more and more divided and polarized on the issue of immigration, I didn’t want to only do something that celebrates the past—America’s history, which is the history of immigrants—but I also wanted to provide cause-related concrete help for the future,” Schechter says.

But the food menu was never an afterthought, despite the extra time and effort placed into the restaurant’s community component. To help execute his vision, Schechter brought on Venezuela-born chef Enrique Limardo and his business partner and political consultant Ezequiel Vazquez-Ger (the two also run the D.C.-based restaurant Seven Reasons—recently named the number one restaurant in the city). Blending 40 different cuisines into nine dishes was certainly a challenge, recalls Limardo, but necessary to help convey the restaurant’s message. Among these dishes is the “Columbia Road,” a blend of ingredients inspired by Ethiopian and Salvadorian cuisines to reflect the two largest immigrant populations in D.C. The non-alcoholic beverage menu incorporates a variety of non-dairy milk-based drinks.

“We don’t want to be so particular that people try our food and say this is really Italian,” says Limardo. “No, it’s something that reminds you of something from Italy, but then you take another bite and it tastes like something from South Africa.”

The notion hits close to home for Immigrant Food’s founding team, as every member is a first- or second-generation immigrant.

“Nowadays, the word immigrant has almost become a bad word,” says Immigrant Food’s Director of Communications and Outreach Tea Ivanovic, who has roots in both Belgium and Yugoslavia. “But all I’ve ever known is to be an immigrant, and I’ve always been very proud to be an immigrant. There’s strength and power in having lived all over and bringing a culture and a richness to America.”

Beyond promoting advocacy efforts, the team also wants to bring a celebratory environment to the space. On opening day, some 400 diners flocked to see immigrant performers showcase talents from photography to puppeteering. A photo booth captured snaps of guests pointing to their countries on a giant world map. That it’s the last building before the White House is certainly a stark juxtaposition—but that’s exactly what Schechter intended.