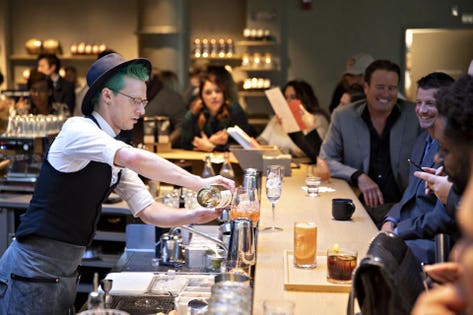 Chicago’s Michigan Avenue has always been a mecca for tourists to the Windy City. And on Friday, they got a new destination to add to their must see lists: the world’s biggest Starbucks.

The coffee giant took over what had been a gleaming, three-story branch of Crate & Barrel and turned into an equally impressive location for Starbucks Reserve Roastery, its upscale concept with food, coffee and liquor.

For days before the opening, Starbucks papered over the windows, camouflaging what lay inside. On Tuesday, it invited members of the media for a sneak preview. The Chicago Tribune even sent its architecture critic, Blair Kamin, to review the transformation.

That run up seemed familiar, and it struck me that Starbucks was borrowing from what car dealerships used to do in the late 20th century, back when the start of a new model year was a big deal.

And something else occurred to me. Starbucks itself is becoming like the General Motors we all knew last century.

Under its legendary president, Alfred P. Sloan, GM famously declared that it would sell “a car for every purse and purpose.”

You might joke that as Starbucks’ offerings become more elaborate, you can wind up paying that much.

But with every new innovation that it tries, Starbucks is following in the Sloan mode.

Starbucks truly is attempting to offer something for every style and preference of customer, whether it’s someone in a hurry or a person who’d rather sip and linger.

Last week, Starbucks opened its first Starbucks Pickup store near Penn Station in New York City, which is the antithesis of what it just launched in Chicago.

Starbucks Pickup allows customers to place an order on their mobile app, stop in, grab their drink, and leave, with minimal human contact. (It’s probably nice to acknowledge the baristas, but hey, it’s New York, and you’ve got to get somewhere.)

Starbucks has tried this in China, where technology is pushing brands to move in rapid ways to capture their piece of a brutally competitive market.

But it offers a variety of approaches in between the Midwestern comfort of Michigan Avenue and the brusqueness of Manhattan.

There are regular Starbucks stores, where you can go inside, greet a barista, order a drink, and find a seat.

There are drive-through only Starbucks stores, meant for commuters. There are Starbucks outposts in grocery stores, Target stores, airports, car washes and colleges.

Starbucks drinks come at all price points. Minimalists can get a solo shot of espresso for $1.95, plus tax. A small coffee is $2.05. If you accumulate 50 points on Starbucks Rewards, that brewed coffee is free.

At the other end of the scale, a vente (aka huge) Peppermint Mocha Creme Frappuccino will cost you $6.75.

Meanwhile, the options at the Starbucks Reserve Roastery seem to be endless. There are five different brew methods listed. “Our master baristas unlock the distinct flavor profiles of each technique,” Starbucks declares.

There are “flights and experiences” that allow you to sample the different brewing methods and even pair them with chocolate. Plus, there are breakfast and lunch choices, pizza and plenty more.

All that will be great for the holiday season tourists who are likely to pour into the Chicago location over the next few weeks.

I used to live a few blocks from the new Reserve Roastery, and I can guarantee the seats and stools and aisles will be filled with selfie-taking visitors who will extol the wonders of the Roastery on social media.

It’s just what their grandparents might have done when they visited Marshall Field on State Street, or when their parents dropped in to see the brand new Water Tower Place.

But, it’s fair to wonder if the Roastery will attract a broader crowd of Chicagoans. “Will anyone else sell a cup of coffee near the world’s largest Starbucks?” the Tribune asked Friday.

The consensus was that they would. The vice president of operations at Stan’s Donuts, which has three shops within a mile of the new Starbucks, thinks it actually might help business.

The Tribune noted that Starbucks has a half dozen of its own stores within 1,500 feet of the new Roastery, which suggests that it might end up cannibalizing its existing outlets.

That’s something GM dealers dealt with for years before the government led bankruptcy in 2009. A frequent complaint was that GM was “over dealered,” with too many franchise owners chasing too many customers.

Of course, there’s a difference between a product that sells for $37,000 and one that can be had for $2 and change.

But as Starbucks sets off on its path to appeal to all types of customers, it might study what happened to GM.

In 1960, the collective GM brands had about 50 percent of the American car market. As it headed toward tbe 21st century, it added more nameplates and styles of vehicles, even though its market share was in steady decline.

There were plant closings, job cuts, the elimination of dealerships and the discontinuation of brands. It was forced to concentrate on places where it could make money, and ditch operations like Europe, where it couldn’t.

Now, in 2019, it has about 17 percent of the market – a strong player, but no longer the overwhelmingly dominant one.

That’s something to think about as Starbucks stretches itself in every direction.