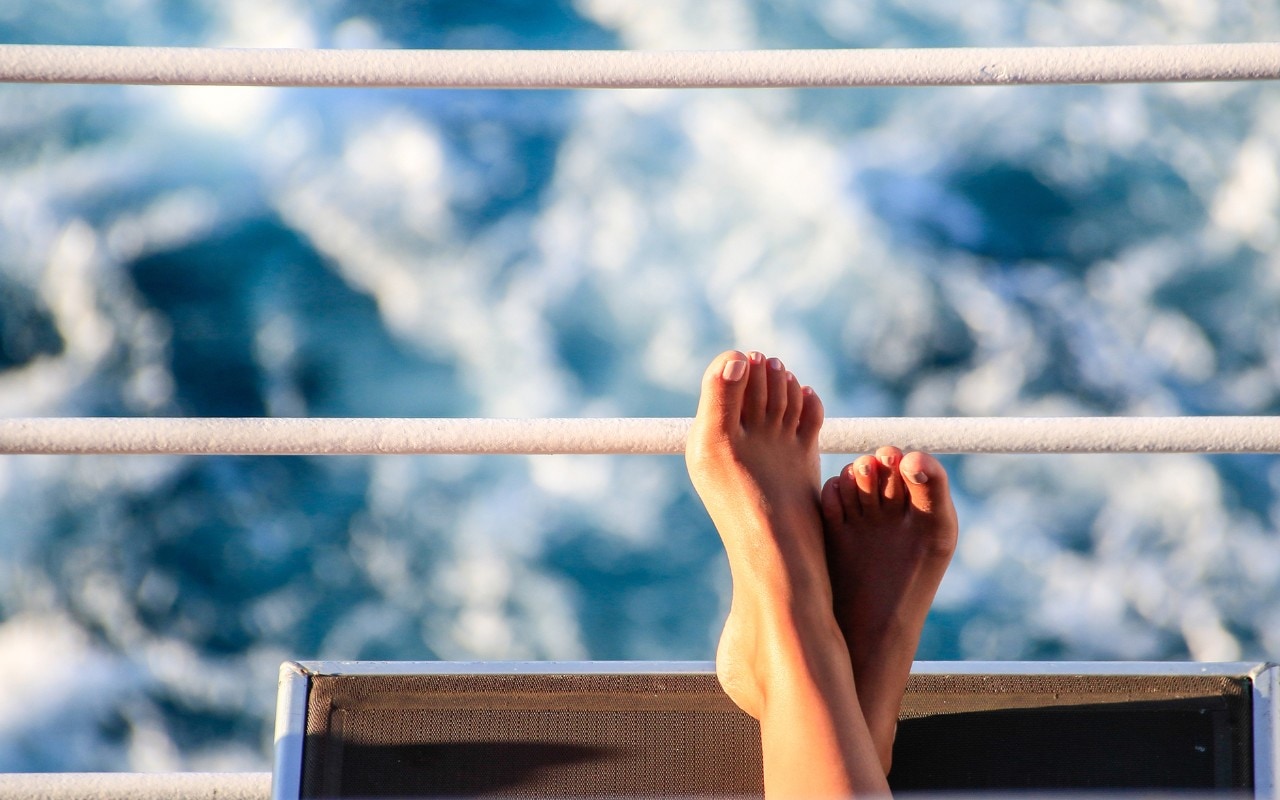 During the construction of Princess Cruises’ latest ship, Sky Princess, 8,000 sensors and four million feet of cables were installed. Their presence is key to the ship’s status as the first purpose-built Medallion Class vessel, as well as its claim to have the best Wi-Fi at sea. A bold claim, apparently the result of significant investment in satellite technology and onboard access points. Well, it was the fastest I’ve come across – I never lost connection, even during sea days.

The 3,660-passenger ship embarked on her inaugural cruise in October 2019, sailing out of Athens. I’ve never been on Princess Cruises before, but I’m familiar with their ships, and Sky Princess is a beautiful amalgamation of their best bits, with a generous dose of ground-breaking innovation provided by Ocean Medallion. Old favourites endure – the doughy delights of Alfredo’s Pizzeria have been voted best pizza at sea by USA Today – but Princess never rests on its laurels. Rock Opera is new entertainment, and in the new 1,873 sq ft Sky Suites, guests can watch films on the pool deck’s screen from the wraparound balconies – the largest at sea.

But the biggest hype was reserved for Ocean Medallion, a coin-sized wearable device which contains a chip and replaces traditional cruise cards. Sky Princess is the fifth Medallion Class ship (she joins Caribbean Princess, Regal Princess, Royal Princess and Crown Princess), but the first purpose-built one, although all new-build ships will be Medallion Class from now on.

Passengers receive an email inviting them to download the app 60 days before embarkation, at which point they receive their Medallion, which syncs with the app.

My Medallion had its first use when I embarked. I tapped it against a sensor when I would previously have scanned a cruise card. As someone who’s lost dozens of cruise cards, I loved the wearability – I wore mine as a pendant, but they can also be worn as brooches or bracelets. Minutes after embarking, my Medallion unlocked my door as I approached my cabin, and my photo, taken just moments earlier, appears on a screen by my door.

Ocean Medallion also allows staff to identify passengers and access information they provide before cruising, from food allergies and emergency contacts to favourite hobbies. This doesn’t require a tap – passengers’ profiles appear on crew members’ tablets when they’re just a few feet away from them. So my cabin steward could see I was in my room and knew not to disturb me. It also flagged my allergies with the waitress at Alfredo’s Pizzeria, and enabled the waiter at the Crown Grill, who noticed it was my friend’s birthday, to rustle up a cake.

When I tapped my Medallion against the ship’s interactive portals, I could bookmark events, track shipmates, and create a digital companion, known as a Tagalong, a feature which might not appeal to older passengers, but will be a hit with kids who can compete against their Tagalong in on-screen games.

But it’s the device’s tracking abilities that impressed me the most. Ocean Medallion let crew members know exactly where I was, and I could use the app to order food, drinks and amenities to any shipboard location. By day three I had ordered a mojito to my sun lounger, found a shortcut after taking the route highlighted by one of the portals (routes for disabled passengers are also highlighted), and started wondering how I would cope on a Medallion-less ship – which is probably precisely what Princess Cruises wants.

Admittedly, there’s something slightly unnerving about being greeted by a cabin steward – one I’ve never met – who welcomes me by name and asks me what the weather’s like back home in Weybridge. He can do this by glancing at his tablet. The people-tracking capabilities are a brilliant market-research tool, but there appears to be genuine desire to treat this data with respect, and the potential for more personalised guest interactions can’t help but improve almost every aspect of a cruise. There were safety-related benefits, too. During a bridge tour Captain Paolo Arrigo demonstrated how, in an emergency, virtual representations of muster stations would allow him to quickly see which ones have reached full capacity and to track missing passengers and crew.

Andrea Stroud, a passenger from New York, recalled her relief when the waiter in the Crown Grill immediately referenced her shellfish allergy. Andy Green from Seattle was another fan. “It makes it brilliantly easy to get hold of everything I need,” he said. His wife, Teresa, was equally smitten. “It’s a bit weird when your picture appears by your door, but kind of awesome!”

When I left the ship at my first stop, the Montenegrin capital of Kotor, I simply tapped my Medallion instead of fishing around for a cruise card at the bottom of my bag. Landside, I bought ceramic replicas of wonky Montenegrin houses from a lady whose cash desk was an antique dresser. With its hilltop fortress and churches hewed from lemon-yellow stone, Kotor was a million miles from the hi-tech hub of Sky Princess, but the speedier, streamlined boarding process made it so much easier to enjoy the best of both worlds in a limited amount of time.

Did I want my cabin steward to comment on his love of Norway because he’s seen that’s where I love to cruise, and every waiter to greet me by name, despite the fact we’ve never met? Not particularly; this kind of personalisation can seem contrived. But did I want my allergies flagged in restaurants, the ability to track friends, and order cocktails to my lounger? Absolutely. Cheers, Medallion.