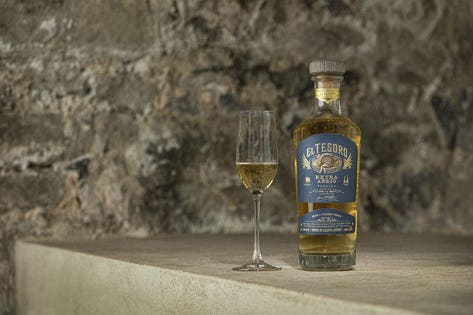 Most tequilas fall under three categories: blanco (unaged), reposado (rested two months to less than one year) and añejo (aged one to three years). For decades, however, some tequila producers have been aging their spirits for longer than the recognized añejo designation. So in 2006, the Consejo Regulador de Tequila (CRT) officially established the “extra añejo” classification to recognize tequilas that have been aged for more than three years.

Since then, the category has grown quickly. As more drinkers become interested in ultra-premium tequilas, more distillers are rising to the occasion and creating marques to sate the thirsty public. Today, the best extra añejo tequilas rival the world’s best scotches and cognacs. Which means they also make great gifts for your spirit-loving friends.

Below are eight of the best extra añejo tequilas to consider this holiday season.

Just released in October 2019, El Tesoro Extra Añejo ($99) is a permanent addition to the brand’s lineup. Master Distiller Carlos Camarena begins with estate-grown agave harvested after seven to eight years, and then ages the liquid in ex-bourbon barrels for four to five years. The oak plays nicely with the agave. Rather than overshadowing it, the oaky accents like caramel, cinnamon and chocolate complement the mature agave for a balanced tequila that requires nothing more than a glass to enjoy it in.

Paradiso ($129) was launched in 1994, well before the CRT established the extra añejo category. The tequila merges the expertise of Camarena with that of cognac blender Alain Royer. The spirit is aged for five years in French oak barrels that previously held cognac. The result is a smooth, elegant tequila that’s loaded with notes of butterscotch and baking spices, plus herbs and soft smoke.

Cuervo bills this expression as the “world’s first extra añejo tequila,” and says the special tequila was a family secret for 10 generations, only shared with close friends. It was eventually shared with the public in 1995, one year after Paradiso hit the market. For anyone turned off by bad memories of shooting Cuervo Gold, know that Reserva de la Familia ($120+) resides at the opposite end of the spectrum. It’s aged in French and American oak barrels for a minimum of three years and then packaged in a wax-sealed bottle. The liquid has notes of rich oak, cinnamon, vanilla and toasted almonds.

Patrón Extra Añejo ($89) was released in 2017, becoming the first addition to the brand’s core portfolio in 25 years. In an interesting twist, the tequila is aged for a minimum of three years in a combination of new and used American, French and Hungarian oak barrels. All that aging imparts aromas and flavors of dried fruits, banana, honey and vanilla, plus light agave and oak.

Another Carlos Camarena special, Tapatío Excelencia Gran Reserva ($150) is aged for about four years in heavily charred new white American oak barrels, which impart lots of woody character into the spirit. That wood is accompanied by roasted agave, floral notes, spice and chocolate for a deep and complex drink. It’s produced in very small batches, so if you see a bottle on the shelf, snag it.

Avión Reserva 44 ($150) gets its name from its meticulous aging process. First, the tequila is matured for 43 months in oak barrels. Then, it sees an additional month in specially-selected petite barrels, which are rotated daily, for an extra dose of wood contact. All that results in a rich and warming tequila with notes of vanilla, ripe fruits and mild spice, plus a bottle that’ll look great on a lucky someone’s home bar.

Situated at the top of the brand’s portfolio, Cazadores Extra Añejo ($60) is an affordable gateway to this spirit category. The highland tequila is aged for at least three years in new American oak barrels and merges the dry flavors of dusty oak and leather with sweet vanilla, cinnamon, roasted apples and baking spices.

Originally created for tequilero David Ravandi’s personal collection, 123 Organic’s extra añejo tequila, dubbed Diablito ($160), was first released in 2014 in a tiny batch of 1,000 bottles. Since then, it’s become an annual release that sees 2,500 bottles hit the market each year. The tequila is aged for 40 months in new French Limousin oak barrels and sports a rich, creamy texture with aromas and flavors of roasted agave, vanilla, pepper and citrus.