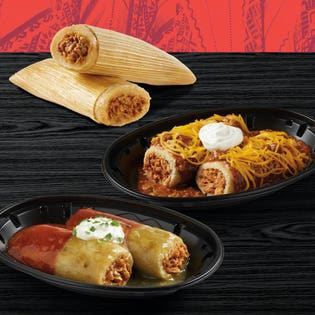 As a Midwesterner with New England roots, my Thanksgiving dinners have been solidly traditional, with the mainstays being turkey and pie.

But, during the two years I lived in Arizona, I was delighted to discover that tamales were on the menu for many Thanksgiving and Christmas feasts.

Friends told me that tamales are often served across the South, in Texas and other parts of the Southwest as part of holiday meals.

They’re especially important to Latino families, but I found that diners from all kinds of backgrounds were eager to serve them.

Since making traditional tamales can be time consuming, most people that I met admitted to ordering them in advance from a favorite spot, and then picking them up on the eve of the holiday.

So, last week, an email from Del Taco immediately got my attention. “Tamales: a delicious holiday tradition, coming Nov. 21,” it declared.

I wondered whether this was a notification for Arizona customers that mistakenly landed in my Michigan email box (I first signed up for Del Taco’s emails when I was living there).

He said the fast food chain expects to sell more than 1 million tamales during the holiday season. Del Taco has about 600 outlets, half company owned and half franchises, according to Entrepreneur.

Del Taco’s tamales are made in the traditional way, with seasoned shredded pork and stone ground masa (corn), hand wrapped in a corn husk, Levitt said.

The tamales are available plain, or dressed up two ways: topped with a combination of zesty red sauce, tangy green sauce, sour cream and cilantro, or topped with chili, hand-grated cheddar cheese, and sour cream.

The chain also is offering a two for $4 offer, while the smothered tamales are offered two on a plate for $4.99.

Lately, Del Taco has been on the cusp of fast food industry trends. For the past few years, it offered a lower-fat turkey taco, and it was among the first chains to embrace plant-based meat substitutes.

Now, tamale lovers have another source for their holiday tables.