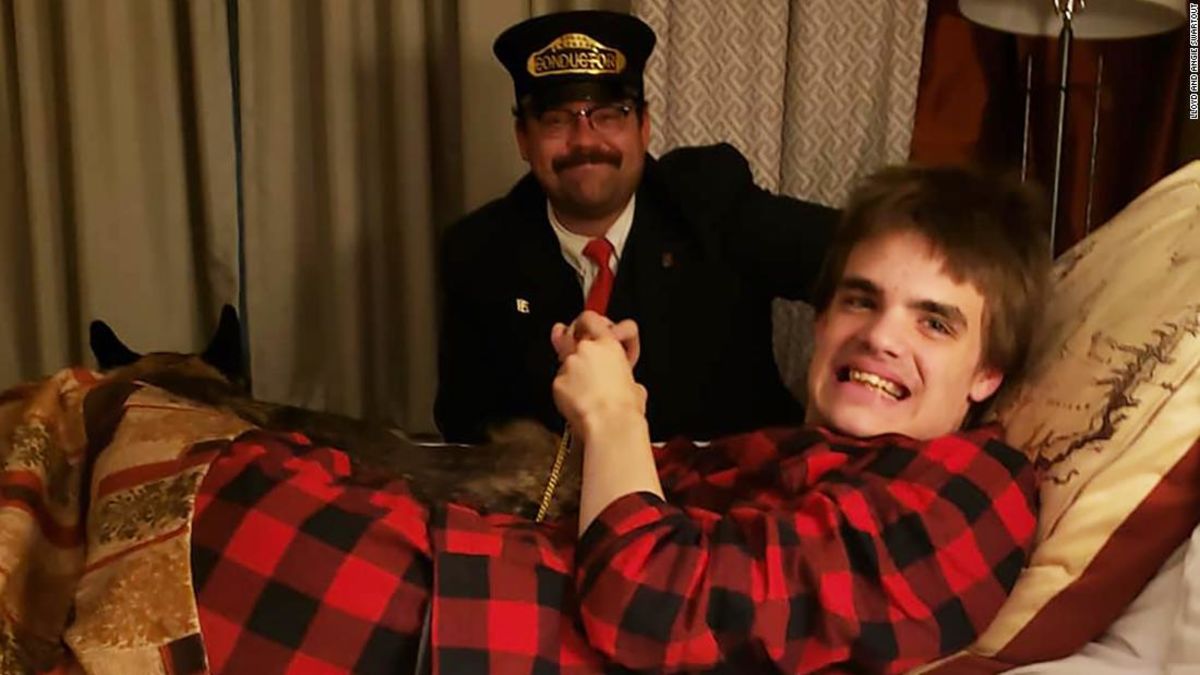 (CNN) — “The Polar Express” is Ty Swartout’s favorite book and he watches the movie a lot, so his parents knew he would be thrilled to ride a real-life version of the magical Christmas train.

“That’s when he started showing us his trains and brought us his ‘Polar Express’ book and wanted it to read it to him,” Swartout said. “That whole week was a lot of excitement for him.”

As it turns out, the experience became overwhelming for Ty. He had what his dad called a meltdown that kept him from getting on the train.

“We’re pretty sure it was because he was just very overstimulated with everything that was going on,” Swartout told CNN. “It was just too much for him.”

But before Ty and his family could head back home, they got a special Polar Express surprise.

Ty became agitated by the prospect of riding the train

They wore the pajamas because the book tells the story of a boy who wakes up on Christmas Eve and is invited to ride a train to the North Pole to meet Santa Claus. The story also features a conductor, who was voiced by Tom Hanks in the 2004 movie.

Ty Swartout and his service dog, Luna, wore red flannel pajamas to go on the Polar Express. His parents had matching shirts.

Swartout said they’ve had the movie on their DVR for three or four years and Ty watches it at least once a month — even more after their holiday decorations come out.

But Ty had a bit of a meltdown before dinner and sat on the floor near the gift shop until he calmed down, his dad said.

Swartout said the staff were “caring and great” and offered to seat them in a quieter spot in the restaurant where he could watch the trains while he ate.

They thought Ty had settled down, but when the time came to get on the train, he sat back down on the ground and got more and more agitated, his dad said.

A maintenance man, the conductor and other staff did everything they could to help and even held the train to give Ty more time.

“They weren’t going to leave until we got him on there,” Swartout said. “We made the decision at that point to go ahead and let them go … It’s not fair to everyone else that’s on the train.”

Ty’s mom, Angie, gave him a big hug and he calmed down when he learned they wouldn’t be boarding the train.

But his Polar Express experience wasn’t over

Swartout said his wife cried as they walked back to their hotel room.

“She was very heartbroken and I was too,” he said. “She wanted it so badly for him.”

Then they got a knock on their door. The maintenance man who had helped them and an off-duty police officer came to check on them and said they wanted to do something special for Ty.

His wife cried and gave them both hugs, Swartout said.

Ty didn’t want to leave the room, so Swartout went to the lobby and a staff member told him how to get his money back.

Then the train’s conductor asked if he could come see Ty.

“We told Ty that there is somebody special that wants to come in and talk to you and he gave us the yes sign and shook his head that that was okay,” Swartout said. “So the conductor came in and greeted him … and Ty actually gave him a hug.”

The conductor sat in a chair next to Ty’s bed and talked to him for a few minutes. Then he took out his pocket watch and gave it to Ty.

“He was in awe. He was starstruck,” his dad said.

The conductor came back a little bit later and gave him a sleigh bell like the ones Santa gives to the kids on the train.

Angie Swartout wrote about their experience on Facebook because she wanted their friends and family to know how well the railroad’s staff treated them.

And he gets to make a return trip

Since last week’s trip, Ty has been walking around happily with his trains and his bell and looking through the newspaper they got from the hotel.

Swartout said the railroad is paying for the family to come back so Ty can get his train ride.

“They really want to make a good experience for him,” he said.

Swartout said he wants to thank the maintenance man and other people who helped them, because he didn’t get everyone’s name at the time.

He’s also been talking with the conductor about how they can to make the trip less overwhelming for Ty.

The conductor is going to give them a tour of the train, so Ty can get used to it. They’ve also arranged for Ty to board the train a little early so he’ll miss most of the commotion.

And that’s not all. The conductor is also buddies with Santa, Swartout said, so Ty will get some one-on-one time with the big guy.