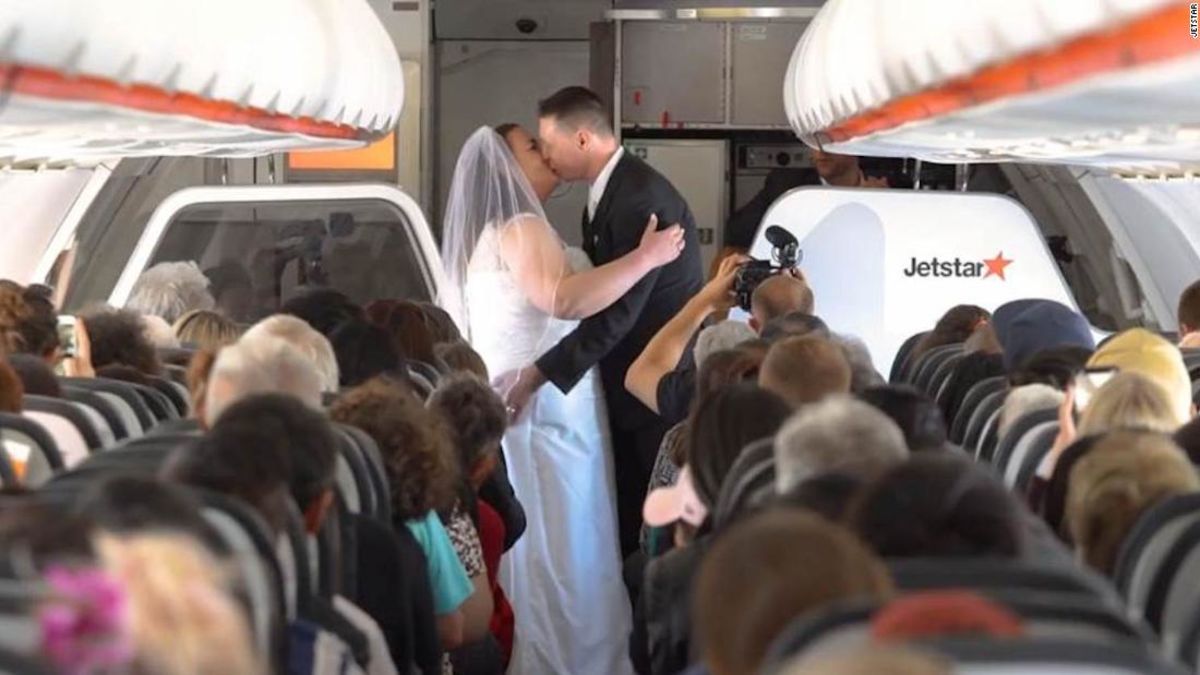 (CNN) — A woman from New Zealand and a man from Australia took their love of aviation (and each other) to new heights by tying the knot 37,000 feet in the air.

Australian David Valliant and New Zealander Cathy Valliant officially said “I do” on a commercial Jetstar Flight 201 from Sydney to Auckland.

As the plane flew between their two countries, the couple pledged their love and commitment to each other in a special ceremony at the front of the aircraft’s cabin. They tied the knot as they hit the halfway point between their home countries.

The couple got married half way between their home countries of Australia and New Zealand.

A Jetstar ground crew member acted as officiant as the plane’s passengers and crew looked on.

“It was the most amazing experience and something we will remember for the rest of our lives,” said Cathy Valliant in a statement.

The couple met online in 2011 while playing the computer game “Airport City” and met in person for the first time two years later at Sydney airport.

“Our love of aviation is what brought us together,” Cathy said.

The legal wedding ceremony took place at Sydney Airport ahead of takeoff, but it was the ceremony in the sky that was truly memorable.

A few years later, her soon-to-be husband had planned to propose onboard a flight from Brisbane to Melbourne but nerves got the better of him, Cathy said. “He eventually proposed that evening,” she added.

Cathy said she wanted to do “something really memorable” for their wedding and so posted on Jetstar’s Facebook page about her idea to get hitched in the air.

The couple are both aviation enthusiasts and first met at Sydney Airport where Cathy took a flight from New Zealand to meet her future groom.

“We wanted it to symbolize our love for aviation, our love for Australia and New Zealand and our love for each other. I thought: I’ll be cheeky and ask Jetstar,” she said.

The airline agreed and made the arrangements for the couple’s dream wedding in the sky.

A representative for Jetstar explains to CNN that “all customers [who had been booked on the flight] received an email beforehand saying there was going to be filming,” though the wedding details were not included. Travelers who wanted to change their flights were able to do so for no charge.

“It was a really special occasion and definitely the first time I’ve conducted a wedding in the air!” said Robyn Holt, the ground crew member who acted as the officiant. She agreed to perform the service at no cost.

“Being a part of Cathy and David’s day and celebrating their love and their passion for aviation was unforgettable. The passengers enjoyed being a part of it too.”

Currently, the Valliants reside in Melbourne.