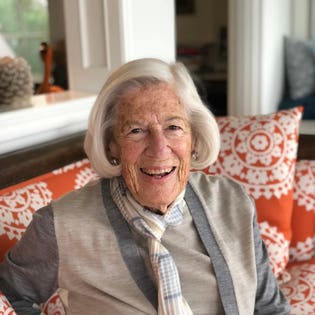 Eat Like A Local is a series by @HungryEditor profiling people on their eating habits⁠—everything from their favorite restaurants and bars to where they grocery shop, and sometimes even their go-to takeout order.

Dorothy Hyman Roberts, lovingly known as Dot, is the Chairman of the Board and Director of Echo Design Group. Echo was founded in 1923 as a scarf business by her parents, Edgar and Theresa Hyman. The name of the company, Echo, is an acronym for her father’s initials: Edgar C. Hyman Co. Roberts became President of Echo in 1978 after the passing of her husband, Paul Roberts. Under her leadership she took the company to new heights, expanding from fashion accessories into home, and extraordinary growth. Echo has created accessories for cultural institutions such as the Smithsonian, Metropolitan Museum of Art, and MoMA, but also for fashion houses such as Brooks Brothers, Coach, and Ralph Lauren.

The following interview has been edited and condensed for clarity.

Benjamin Liong Setiawan: What were some of the key steps that led you to where you are today?

Dorothy Hyman Roberts: I graduated from college on a Sunday in June 1950. I got married the following Sunday and then went on a two-week honeymoon. My father said, “be here July 2nd.” On July 2nd, I arrived at the office and was handed a clipboard, which now every new employee receives on their first day. At the time, we had 10 employees. I was told to go around to each of them and do whatever they asked me to do. In the beginning, my main job was filling out index cards with every order from every customer. At the end of each month, I had to put the information on a larger card. Doing this made me learn about every customer and every city in the United States. Then a year or so later, I became the “showroom girl” and took care of any customer that came into the showroom. I grew up here. At first my father ran the business, then my aunt, then my husband and myself. My husband and I divided up the business. I was responsible for design, product development, sales, advertising, and public relations. My husband did everything else–all the financials, operations, and human resources. In 1978, he died suddenly and I was forced to run the business with the help and support from many trusted and longtime employees. From day one, I have loved what I do. I am so proud of all that we’ve accomplished and how we’ve been able to grow and evolve. I love being able to work with my family–my children, Steven and Lynn, and daughter-in-law, Meg, and now my grandson, Charlie, who is part of the fourth generation. I love working alongside the Echo team (where many are a third of my age!) and our customers and resources.

Setiawan: What are your favorite restaurants in New York City?

Have been going there for 30+ years for lunch every Saturday and often eat dinner there too. My go-to order is bowl of olives to eat with the bread. Then bibb and red oak leaf lettuces with gruyere, dijon vinaigrette, and sourdough croutons. I normally share half of the salad with one of my guests. The lasagna, if it is in on the menu, or a burger with fries! Dessert I will always have the chocolate espresso cake. It was on the menu when they first opened, but now it’s off-menu. (Restaurant note: We make it in mini form and send it out as a complimentary dessert for anniversaries and birthdays. It is known as ‘Dot’s Cake’ and all servers know to send it out at the end of the meal for Dot especially.) Also, at every restaurant, my drink is an Arnold Palmer–half lemonade and half iced tea.

It’s not possible to imagine a more loyal and supportive friend to Union Square Cafe than Dot Roberts. And it’s not only because she has returned to lunch at her favorite table each and every Saturday for over 33 years. Perhaps as importantly, Dot has been the restaurant’s leading ambassador, lending an air of tasteful royalty to our dining room, while generously hosting cherished family members, and entertaining business and social guests.

Love the food, service and ambiance.

This is my go to for pre-theater. I go there quite often as try to see as much theater as possible. I love the pizza bread, then have a salad and pasta, and always something chocolate.

Often go there on Fridays for lunch. I used to get the Gotham salad, but recently switched to the lobster and crab salad.

Setiawan: If someone was visiting your area and they wanted to eat or drink like a local, which places would you recommend?

Roberts: There are two restaurants in my immediate neighborhood that I frequent and would recommend. One is Morso and the other, Bistro Vendôme.

Morso is an Italian Café. When I go there, I usually get a salad and a pasta dish. Always some sort of chocolate dessert too.

At Bistro Vendôme, which is an upscale casual French bistro, for lunch I order a Croque Monsieur (as good as any restaurant in Paris), an artichoke salad, and profiteroles.

Setiawan: Echo was started in 1923 by your parents and survived the Great Depression. What do you think has allowed Echo to endure almost a full century later?

Setiawan: In the 1980s, you brought about the Polo/Ralph Lauren partnership and in the 1990s expanded the collection to include home. How did those significant milestones come about?

Roberts: We had been asked by many to do a license and hadn’t been interested. When we were called by Polo/Ralph Lauren, we decided if we were going to do a license, we should do it with the best! By 1992, Echo had become a multi-brand, fashion accessories company, but we wanted to further diversify. We took a survey to determine what other business we could go into that would utilize our expertise and it was the home category. While home seems vastly different from fashion accessories, we realized that both tapped into our core competencies of print, pattern, and color, and we could bring beauty to life by accessorizing your wardrobe and accessorizing your home. We launched our home division, beginning with wallpaper and fabrics, and over the years expanded to bedding, bath, rugs, window treatments, and table linens.

Setiawan: Which product launches were you most excited about?

Roberts: In 2008, we brought Echo Touch gloves to market, allowing one to use touch screen devices without exposing the fingertips. The technology used in this glove is now in every single glove in our line and has literally transformed this market. We diversified from “just scarfs” to creating and selling an extensive cold weather line, full of innovative fibers and fabrications, to a fun beach line of cover-ups, pareos, hats, and bags. Another category that has expanded is our outerwear collection, which includes ruanas and ponchos, perfect for travel and seasonless dressing.

Setiawan: What has been inspiring you?

Roberts: The Camp exhibit at The Met was so well done and showed such an interesting curated product selection.

Hadestown was great–the music, set, and acting–so unusual and different.

Loved Rocketman. Elton John is so talented and the movie showed such insight into his difficult and loveless childhood. I was inspired to see how he persevered and triumphed in the end.

Setiawan: Do you cook?

Roberts: I don’t anymore. I used to cook and entertain a lot but since my husband died, I don’t cook at all. It’s much easier to go out or order in.

Roberts: If I don’t have a date during the week, I often stop at Pret and pick up one of a variety of salads and always a chocolate chip cookie. Sometimes on a Sunday night, I order an artichoke salad and profiteroles from Bistro Vendôme.