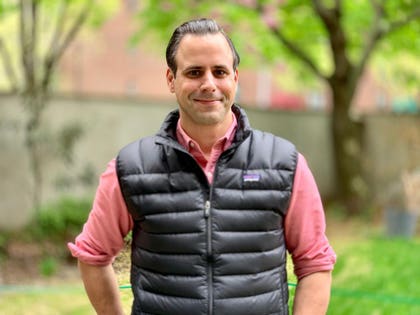 By any accounts, Matthew Wadiak has had a successful career. After working in kitchens as a young man, Wadiak and his two partners founded Blue Apron, a meal-kit company that grew to $795 million in sales in just five years before launching an IPO.

But two years ago, Wadiak started a new venture, once again taking aim at the way in which people purchase and consume food. Only this time, the venture stemmed not from a desire to help people cook more, but to build a model for a new type of environmentally and economically sustainable food system. From its 800-acre farm, Cooks Venture is building a viable model of regenerative agriculture that climate scientists agree could reverse climate change, one chicken at a time.

Kenny Gould: Where are you from?

Matthew Wadiak: I was born in Houston. In middle school, I moved to Illinois. I grew up outside Chicago and then moved to northern Illinois, to a little town called Roscoe. I’d always been I interested in cooking. When I was sick at home, I’d watch Galloping Gourmet or Julia Child or whatever was on PBS. Then I’d go to the bookstore and buy a cookbook. As a kid, I’d cook family meals. So when the time came to get a high school job, I decided to work as a dishwasher in a restaurant. I worked at Mary’s Market for a Cajun chef named Chris Avonda. I learned the basics from him. He taught me how to cut a tenderloin, how to cut fish. It was a very comprehensive training. He hired a sous chef who had the intention of opening a brewery with her husband. Her name was Stephanie Valentine and she became my boss. She’d just come from Charlie Trotter’s in Chicago. She also took me under her wing and taught me how to clean, how to not mess with food too much, how to create a higher level of cooking. Chris got me the basics and Stephanie took me to another level.

KG: What did you learn from those early cooking jobs?

MW: They helped me understand excellence. I was a messy teenager, but after working in a kitchen I became uptight about organization. When you’re busy on the line and you’re managing tickets, you cook by instinct. It’s like learning a language. That develops a lot in terms of personality. A lot of the better employees we’ve had over the years had a culinary background. I’ve had operations people and people in finance and you can almost tell if someone has done that work. There’s also a camaraderie among cooks.

KG: What were some of your other formative experiences?

MW: I went to the University of Illinois and cooked my way through college. After pursuing a career in photography and art, I wanted to go to culinary school. I was admitted to the Culinary Institute of America in Hyde Park. After that, I did an externship in Italy, then moved to California. I ended up working at Oliveto and worked for Paul Bertoli, who wrote the first Chez Panisse cookbook. That’s my background in food. As a young guy working with people in the Charlie Trotter circle and then moving to California, I was spoiled. When it comes to ingredients, California is the land of milk and honey.

KG: You recently started a new project called Cooks Venture, which you define as a group of farmers, cooks, and food professionals building a new, more transparent food system. Did your time at Blue Apron play into that?

MW: Over the years, I had many failed business ventures and some minor successes. At some point, I met up with my two co-founders of Blue Apron. The fundamental idea behind that project was to get people to cook more. It happened that the kind of food I thought was acceptable to cook in a kitchen wasn’t available. I thought the quality of those ingredients should be similar to what I used to cook. So we built a network of 250 farms. That helped me realize that agriculture is a completely untapped area of opportunity in the biggest industry on the planet. Growing food, cooking food, preparing food. The art of eating.

KG: So you saw an opportunity.

MW: When people in the industrial food system think about feeding a lot of people, they think, Let’s go buy something that’s available. They don’t think about growing something new. But it’s important to think about those things differently. We live in an era when we have the ability to think about how we’re growing food regeneratively. We should take into consideration what we want to eat, not just what can we eat.

KG: Can you give me an example of how our current food system is flawed?

MW: All of the fruits, nuts, and vegetables grown for domestic and international export comprise about 3 percent of America’s agricultural land use. The other 97 percent is allocated primarily to row crops like corn and soy. Now, most of the corn we grow goes to produce ethanol. But 1.7 liters of ethanol produces 1 liter of ethanol combustion energy. That’s 700 percent inefficient. It’s ridiculous. The argument is always the same — we’re creating jobs. But over 50% of farmers lost money last year. So you have farmers you’re subsidizing to grow cheap corn that are losing money. It makes no sense. After ethanol production, the largest use for corn is cattle feed. Except, when you give cattle corn and soy as feed, it upsets their rumen. They have issues with digestion. In a human, this would be massive acid reflux. That’s why most cattle are given growth hormones and antibiotics. They should be eating grass. Cattle are actually carbon negative when they’re allowed to roam on pasture.

KG: It seems crazy that we continue to subsidize this system.

MW: We’ve been missing the boat on this whole thing. If we really want to change the way we’re thinking about agriculture, we need to think about the impact of corn and soy. Now, one of the animals that needs to eat corn is the chicken. But modern breeds that grow into a 9 or 10 pound chicken don’t have the digestive power to eat complex, diversified feeds. We’re back to the same problem. They have to eat this high octane mix, which is what allows them to convert feed into muscle mass in a short time. But that’s completely unnatural. Where we’ve gotten things wrong in the last 15 or 20 years is that entrepreneurs look at one part of the supply chain. We’re going to fix the soil, we’re going to fix the chicken. From that lens, you can’t fix anything. These are reliant and integrated systems. To fix anything, you have to be a vertical company with a circular economy. That’s what Cooks Venture is. We’re a group of cooks, farmers, and professionals who couldn’t find what we wanted in the food system so we’re building it ourselves from the ground up, plant-by-plant, animal-by-animal, and meal-by-meal.

-Interview edited for clarity and brevity.