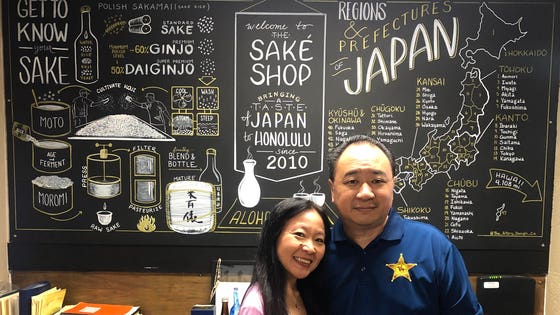 Hawaiʻi Means Business is a monthly column that highlights food businesses in Hawaiʻi that are accomplishing something new, innovative or special.

It’s Saturday night in Kakaʻako, a former fishing village famous for its salt ponds on the island of Oʻahu that is emerging as the newest destination for trendy restaurants, luxury high-rise rentals, and shiny natural foods markets. Tucked off the beaten path in an unassuming office building, The Sake Shop hosts a group of jovial sake enthusiasts at its monthly tasting.

Guests sip and geek out on the latest arrivals. Shop owners Nadine and Malcolm Leong weave in and out as they balance mingling, teaching about the evening’s selections, and advancing the line at the register. One by one, happy faces with rosy cheeks finish their tasting, peek into the coolers lined up against the wall, and purchase a bottle on their way out.

As sake interest continues to rise in the United States, The Sake Shop is the only place in Hawaiʻi offering an abundant inventory, tastings and education.

Sake sales in Japan have declined 30 percent since 1975, according to NBC. So breweries began focusing on exports, which have increased every year over the past nine years, with sales up 19 percent in 2018, according to The Telegraph. The top importer is the United States, which purchases a third of Japan’s sake exports, according to NBC.

The Joy of Sake, an annual event started in Honolulu and now also held in New York, London and Tokyo, boasted over 500 sakes this year. The event expands and sells out every year, with 1,600 attendees in 2019, said Amanda Corby Noguchi, owner of Under My Umbrella, the public relations and marketing company that coordinates the event.

The Leongs opened The Sake Shop in 2010 after noticing a hole in the market locally.

“We used to always travel to Japan a lot,” Nadine Leong said. “… There’s a lot of sakes that we found there that we really liked, but, coming back to Hawaii, when we tried to source them out or find them, we couldn’t find them, and then, when we did go to places that actually sold sake, there was nobody to converse or talk with about the product.”

As sake started gaining popularity on Oʻahu, the couple decided to be the ones to fill the void.

“We thought, you know, it would be a really good idea to open up a store that was dedicated just to sake, get some education, offer tastings,” Nadine Leong said. “We could have people from Japan come in. We could meet the brewers.”

They relocated their shop to Kakaʻako in 2018. It features over 150 sakes, including the high-end and hard-to-find. It sells bottles as well as individual cans. It also offers a small selection of Japanese beers, whisky, shochu and various other spirits.

The shop hosts these free tastings every month as part of the Leongs’ commitment to consumer education and brewery promotion.

Eli Nygren, a local from Maui, pours Tokubetsu Junmai and Junmai Daiginjo sake at this tasting. They hail from Chiyonokame, a brewery in Japan where he practically lived for five months recently to help make sake.

As guests sip, Nygren shares his story of sleeping in a tent in the office between shifts of making koji rice, which sparks the fermentation process, by sprinkling koji mold over steamed rice and mixing it in a heated room. A video of the brewery’s technique plays on a loop in front of Nygren as he pours.

Education is the foundation of The Sake Shop.

“‘I know nothing about sake. Help me,’” is a common phrase that Nadine Leong said that she hears customers declare upon entering the shop for the first time.

One woman came in asking for recommendations on sakes that could be served hot. Nadine Leong suggested three options – Yamahai Junmai, Kamoizumi Shusen and Daishichi – and then instructed her on how to warm the sake properly by placing a filled carafe in a hot water bath instead of direct heat for two minutes.

Near the front door, a table features bags of rice in various stages of polishing. Malcolm Leong explained the milling process used to polish the rice. Rice for a daiginjo sake, for example, goes through the mill two to three times to polish off 50 percent of the grain’s outer shell.

Malcolm Leong pointed out a cooler of Junmai sakes, a selection that he considers contemporary but old-school because the brewers purposely make them earthier, ricier and less fruity but still smooth. In general, the style has shifted over the years from earthy flavors many times enjoyed warm to the elegant, fruity, floral sakes better served chilled that we are seeing more of today, he explained.

He even teaches how the type of yeast used, wild versus manufactured, evokes certain flavors in the sake.

The Leongs also know the story behind every sake that their shop carries.

Malcolm Leong revealed the story behind Icebreaker, an unpasteurized, light and fruity sake produced with wild yeast by the British-born Philip Harper, the only foreign brewmaster in Japan. Harper arrived to Japan in the ’80s, worked his way up in a brewery after starting at the lowest level, took all of his tests, and got hired by a brewery that was in danger of closing. Together with the owner, Harper rebranded the brewery, changed the sake style, and, in his first year, won gold in the national new sake tasting competition.

The Sake Shop also hosts a four-hour course and exam led by national wine and spirits distributor Young’s Market Company and designed and accredited by the Wine & Spirit Education Trust. Students taste a range of sakes ­– some not available outside of Japan – as well as learn how sake is made and how various production methods affect the style, price and batch size.

As sake continues to gain popularity nationally and locally, The Sake Shop is well-positioned for success as Honolulu’s lone space for an educational and entertaining sake experience.