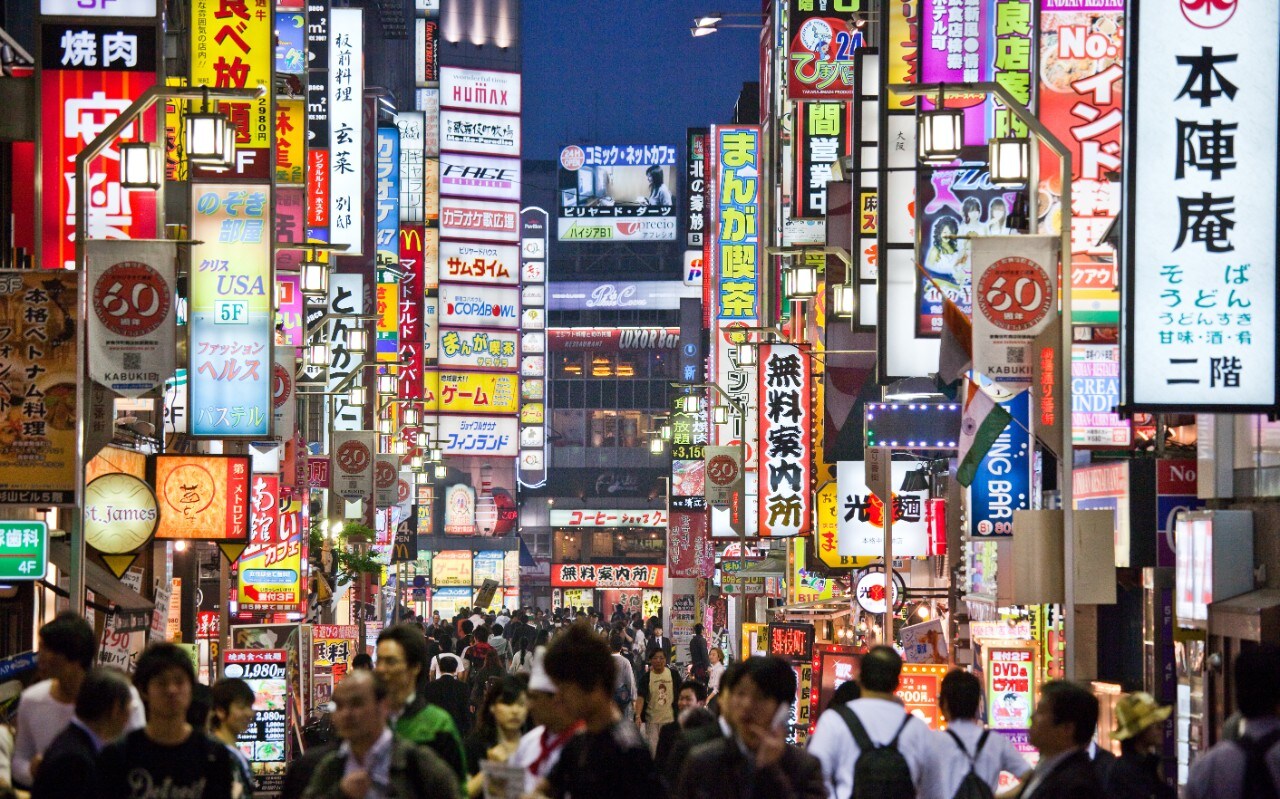 The very idea of Tokyo – one of most densely packed cities on the planet – can be intimidating even before getting off the plane. In reality, however, it is a refreshingly easy city to visit. Despite its salaryman crowds, flashing neon and sprawling train networks, it is a place that thrives on running smoothly and safely. And an added gold star? It’s as clean as a city can possibly be.

But perhaps best of all is its structure: lacking a clearly marked centre, it’s made up of a patchwork of different neighbourhoods, each distinct in identity and atmosphere – and so there are the museum-like fashion flagships of architectural nirvana Aoyama; the edgily rainbow-bright fashion tribes of trends-hub Harajuku; the low-key fashion stores and cafés of leafy Daikanyama; and the narrow lanes, old school kimono shops, temples and lively markets of Asakusa.

Danielle Demetriou, our resident expert, offers her top tips on the best things to do and the hottest places to eat this season.

• The best things to do in Tokyo

Foraging takes centre stage at Inua (2-13-12 Fujimi; 00 81 36 683 7570), the brainchild of chef Thomas Frebel who spent close to a decade as Rene Redzepi’s right hand man at Copenhagen’s cult Noma. After two years of foraging across Japan, Frebel opened Inua, where a contemporary, clean-lined ninth floor space (designed by OEO Studio) is home to an impressively creative menu – from bee larvae to pickled petals.

• The best restaurants in Tokyo

Two words: cherry blossoms. Tokyo turns a distinct shade of pink every spring around the end of March and start of April – and not just in terms of its blooming trees (pink is, quite literally, everywhere, right down to the sakura-flavoured lattes sold in Starbucks). For a full-on experience, join the throngs picnicking beneath thousands of blossoming trees in east Tokyo’s Ueno Park. Or for a quiet taste of the pink blooms, hop a little further north to Yanaka Cemetery, a picturesque temple-fringed spot also packed with cherry trees.

• The best free things to do in Tokyo

• The best hotels in Tokyo

Start the day at Tokyo’s oldest Buddhist temple Sensoji (2-3-1 Asakusa; 00 81 3 3842 0181), located in the eastern Asakusa district. Wander beneath large red gates, through a seasonal market and past tiered temple roofs before copying locals as they clap hands, toss coins and burn incense at the main altar.

Afterwards, explore Asakusa’s narrow lanes which are lined with tea houses, local restaurants and kimono stores. Don’t miss nearby Kappabashi Dori (also know as Kitchen Street) – a magnet for restaurateurs and chefs due to its kitchenware shops. For lunch, head to Sometaro (2-2-2 Nishi-Asakusa; 00 81 3 3844 9502), an understated restaurant in an old wooden house where shoes are slipped off at the door and okonomiyaki (savoury pancakes) are cooked at low tables with in-built hot plates.

After lunch, take a leisurely 20-minute stroll (or five-minute train hop) across the Sumida River in the direction of one of the city’s most famed attractions: the blue-white latticed façade of Tokyo Skytree (1-1-12 Oshiage; 00 81 3 5302 3470), the world’s tallest freestanding broadcast tower. Head up to one of two observation decks in ear-popping lifts to take in a bird’s eye view of Tokyo’s urban sprawl (keeping an eye out for the sight of Mount Fuji in the distance, on a clear day).

To explore Tokyo’s greener side, head next to Ueno Park (3 Ikenohata, Taito-ku; 0081 3 3828 5644). The park – which dates back to the 19th century – comes to life in spring, as more than 1,000 cherry trees burst into pink bloom, attracting packed crowds of springtime revellers. It’s also a perfect one-stop culture shop, as it’s home to a string of museums (Tokyo National Museum among them) plus temples, shrines, lotus ponds and even a zoo with celebrity panda residents.

• The best hotels in Osaka

A visit to Tokyo is incomplete without at least one sunset cocktail in a skyscraper: head to the 52nd floor New York Bar at the Park Hyatt in Shinjuku (3-7-1-2 Nishi Shinjuku; 00 81 3 5322 1234) and pretend you’re an extra in Lost in Translation (yes, the film was set here) while enjoying high-quality cocktails against a backdrop of live jazz.

Come back down to earth with a pleasant bump by heading for dinner at Kaikaya By The Sea in Shibuya (23-7 Mariyama-cho; 00 81 3 3770 0878) – a colourful, lively restaurant where charismatic staff serve an array of fresh fish dishes. The house special tuna jaw maguro no kama is recommended – and far more delicious than it sounds.

• The best restaurants in Tokyo

Keen to spot some future fashion trends? Head to Harajuku and disappear among the colourfully dressed teen tribes, while exploring the fashion boutiques and waffle cafés that line bustling Takeshita Dori street. Then reclaim a sense of inner calm by following a wide forest-lined park just behind the station that leads to one of Tokyo’s most serene spots: Meiji Jingu (1-1 Yoyogikamizonocho; 00 81 33 379 5511), an elegant Shinto shrine, complete with tall wooden torii gates and tree-filled courtyards. If you’re lucky, you might catch sight of a wedding procession: look out for the billowing white kimono of a Shinto bride.

Refuel alongside fashionable locals with lunch at Maisen (4-8-5 Jingumae; 0081 120 428 485), a short walk from Harajuku. Here, delicious mouth-melting tonkatsu breaded pork cutlets steal the show, served up in the atmospheric setting of a former public bathhouse. Shopping should be next on the list: wander up nearby Omotesando, an elegant sloping boulevard lined with architect-designed fashion flagships, from the glass bubble-esque façade of the Herzog & de Meuron-designed Prada building to the minimalist tree-inspired form of the Tod’s tower by Toyo Ito.

Pause for a breather at the Kengo Kuma-designed Nezu Museum (6-5-1 Minami-Aoyama; 00 81 3 3400 2536): walk along its serene bamboo and stone entry path before exploring its Japanese heritage treasures (from tea tools to swords). Don’t forget to venture outside to wander among its exquisitely maintained gardens, complete with ponds and teahouses.

• Where to eat on a budget in Tokyo

Escape the crowds for an intimate and authentic Japanese meal at Rakushokushu Maru (Aoyama KT Building; 00 81 3 6418 5572) – try saying that after a few sips of sake. The basement restaurant has an elegant contemporary décor – but the real scene-stealer is the menu, showcasing a seasonal modern take on Kyoto’s traditional kaiseki banquet-style cuisine. Friendly staff can assist with choosing food and sake (it’s good to order a few dishes to share, tapas-style).

Finish the evening by indulging in that celebrated national pastime: karaoke. For a local experience, head to Uta Hiroba near Shibuya Station (2-16-7 Dogenzaka; 0081 3 3780 9771) where you can rent a small private room with a large screen, some percussion and a drinks menu which can be ordered on a telephone – before belting out classic pop hits.

• The best nightlife in Tokyo

The slick yet serene Aman Tokyo spans the top six floors of a 38-storey skyscraper in the business district Otemachi. The minimal interior taps into Japan’s design heritage with its wood, paper and stone, while tall partitions create loose boundaries between the lobby, lounge, restaurant and bar. The spa spans two floors and an epic 2,500 square metres.

The Claska is Tokyo’s original – and arguably best – design hotel. Located on Meguro Dori, a street famed for second-hand furniture stores, it’s a little off the beaten track, but has impeccable design credentials: in addition to 20 guestrooms, it has several galleries, a beautiful design store and a restaurant.

Stylish OMO5 blends a no-frills concept with contemporary design. Housed in a former office building and renovated by architect Tatsuro Sasaki, the hotel is inspired by yagura – a type of Japanese-style wooden scaffolding. Each of the 125 clean-lined and compact rooms have aromatic cedar wood frames, complete with raised beds and tatami-style flooring.

• The best boutique hotels in Tokyo

Invest in a handcrafted kitchen knife – complete with wooden handle and the name of its maker engraved in Kanji – from Nihonbashi Kiya (Coredo Muromachi 1F; 00 81 3 3241 0110), a family-run business dating back to 1792.

Pick up some split-toe socks from Sou Sou (5-4-24 Minami-Aoyama; 00 81 3 3407 7877) in Aoyama, the Tokyo flagship of the Kyoto textile company often described as Japan’s answer to Marimekko, due to its bold prints, quality craftsmanship and modern take on traditional Japanese clothing (socks included). Also great for childrenswear.

• The best shopping in Tokyo

Japan prides itself on its distinct four seasons, and these make Tokyo pretty much a year-round destination. That said, July and August can be overwhelmingly hot and humid, while the first few months of the year are often bone-chillingly cold, despite crisp sunshine.

The best times of year weather-wise are spring, especially late March and early April, when the cherry blossom bursts into flower, and autumn, between September and December, when there are many warm, blue-sky days, plus the autumn leaves are at their most beautiful (in November in particular). Ideally avoid national holidays such as the first week of the New Year, when everything shuts down, and Golden Week, which normally spans the end of April and early May, the busiest time for domestic travel.

Tourist board information: for Tokyo: gotokyo.org, and for Japan: seejapan.co.uk

Flight time: London to Tokyo normally takes from 11 hours to 12 hours and 30 minutes

Japan is famously a minefield of often unspoken rules for foreigners. From handling chopsticks to getting into taxis, almost every aspect of daily life is governed by rigorous etiquette. While exceptions are made for foreigners, here are a few tips to avoid turning your visit into a one continuous faux pas:

• There is no culture of tipping, so don’t try to tip in taxis or in restaurants (unless you want them to come running after you to give the money back). Service charges tend to be added in more high-end establishments such as international luxury hotels.

• It’s frowned upon to talk on your mobile on public transport.

• It’s regarded as bad manners to blow your nose in public.

• When receiving business cards, accept with two hands (and optional bow), and don’t immediately put away in your pocket but leave it out to admire for a while.

• In a Japanese onsen (hot spring), remove all clothes and wash at the low taps before entering the baths.

Enticed by dreams of cherry blossoms, minimal design and sushi on tap, Danielle swapped London newsrooms for life in Japan 11 years ago. She now lives on a quiet leafy lane, a surprisingly short stroll from the neon blare of Shibuya, and has endlessly explored the capital’s winding back streets and high-tech towers.

Experience Tokyo with The Telegraph