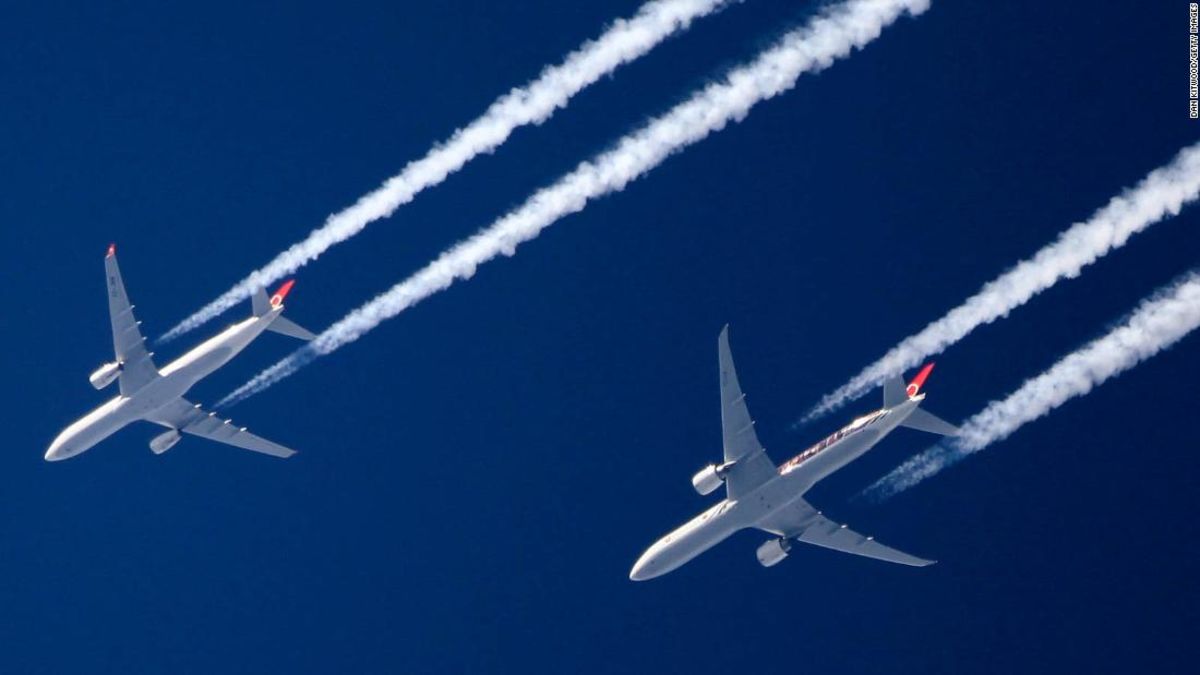 (CNN) — In aviation, it would seem, claiming you’re going green is becoming as important as competing on fares.

When European budget airline easyJet released its annual results this week, they paired the report with an announcement that from November 19, it would become the world’s first airline operating net-zero carbon flights. It would achieve this, it announced, by carbon offsetting all its flights.

The airline plans to do this with “forestry, renewable and community based projects.” It has also signed an agreement with Airbus to research the possibilities of hybrid-electric aircraft.

EasyJet is the third airline to announce a carbon offset scheme this month alone. It joins Qantas, which has pledged to go net-zero on carbon emissions by 2050, and British Airways, which will carbon offset all its UK domestic flights from 2020. BA’s parent company IAG has also pledged to go net-zero on carbon emissions by 2050.
Meanwhile Dutch carrier KLM launched an advertising campaign advising passengers not to fly unless necessary. Other airlines, including Air Canada and Air New Zealand, operate their own carbon offsetting schemes.

With aviation accounting for at least 2% of global carbon dioxide emissions, and aircraft movement expected to grow at least 1.9% annually over the next 20 years, according to the Airports Council International, there’s arguably a need for positive action on reducing environmental impact.

The latest moves by airlines have been announced amid the rapidly growing “flight shame” movement, which has taken off in Europe, where aviation fuel is not taxed. It is thought to be responsible for an 8% dip in Swedish aviation.

Climate campaigner Greta Thunberg, currently hitching a ride back across the Atlantic on a zero-emissions yacht, has also been credited with persuading some people to eschew air travel.

Elton John said at the time that he had paid to offset their journey to his home in the South of France. In September, launching his sustainable travel initiative, Travalyst, the prince reiterated that he regularly offsets his flights, calling it “the right thing to do” and saying “we need to make [carbon offsetting] cool.”

But environmental campaigners and travel experts say that there’s just one problem: carbon offsetting doesn’t work in the way proponents say it does.

Mike Childs, head of science, policy and research at environmental campaigning organization Friends of the Earth, calls carbon offsetting in the aviation industry “a giant con.”

“Consumers are being sold a pup,” he tells CNN.

CNN’s Bill Weir talks with teen climate activist Greta Thunberg on the challenges and victories in her fight to bring global awareness to climate change.

A 2017 report for the European Commission looking at carbon offsetting found that 85% of offset programs for the UN’s Clean Development Mechanism failed to deliver “real, measurable and additional” emission reductions, and noted that some projects would have happened anyway.

“The science is very clear,” says Childs. “We need to cut greenhouse gas emissions [in every sector] as soon as possible.

“As well as reducing emissions, we need already to be planting large numbers of trees and restoring wetlands and peatbogs.”

“So the challenge for easyJet is, where do you offset when everything is happening anyway? It’s like paying a nun not to drink.

“To continue behavior while paying for something that’s happening anyway doesn’t undo the harm you are doing.”

“We know that carbon offsetting is only an interim measure while new technologies are developed, but at the moment we believe it’s the best way we have to remove carbon from the atmosphere,” the spokesman said. “In the long-term the aviation industry will have to reinvent itself.

“The aim will be to reduce the amount of carbon offsetting we do as new technologies emerge which reduce carbon emissions.”

For it’s part, Qantas says its offset program to protect the Great Barrier Reef and the forests of Tasmania and Papua New Guinea is also accredited by the same monitoring bodies and marks significant steps in mitigating the airline’s impact on the environment. The airline says its also funding research and innovation to create sustainable aviation biofuel.

The UN Environment Programme‘s own website states that “carbon offsets are not our get out of jail free card” and that “offsets are only part of the answer.”

“Offsets… risk giving the dangerous illusion of a ‘fix’ that will allow our billowing emissions to just continue to grow,” it says.

Offset schemes could be too late

What’s more, any tree-planting projects invested in now are unlikely to have an effect by 2030 — the date by which emissions must fall by 45%, according to the UN.

“All these schemes are very well and good but not quick enough.”

She adds that tree planting comes with “no guarantees” — and trees can be cut down before they start storing carbon. “These projects can never radically curb emissions at the speed we need. The only thing that can is system change,” she says.

Roe calls the recent carbon offsetting moves of the airlines “unhelpful” and says they’re “sending the wrong message to people.”

“It’s shifting moral responsibility to people in other parts of the world rather than tackling your own businesses’ contribution to the problem,” she says.

“The reality is that there is only one thing worse than offsetting the emissions being caused by their aircraft and that is not offsetting them.”

Buckley agrees however that the aviation industry needs to do more.

“It’s great that they are starting to fund some of the solutions to climate change through carbon offsetting, but at the same time, they need to be supporting the development of a true green solution for fast, long-distance travel,” he tells CNN, saying that he believes biofuels and electric aircraft to be the future of aviation.

However, he says, it is also “crucial for the airline industry to acknowledge its role in climate change, and be supporting the solutions right now — and carbon offsetting is one way they can do this.

“However it needs to be part of the communication and education around reducing travel emissions as well.”

Friends of the Earth’s Mike Childs admits that a “tiny percentage” of carbon offsetting projects may be good, but warns that, “If you have five small projects in Nepal and half the world saying they want to use that one, they won’t have capacity. Large-scale offsetting projects are no answer to what needs to happen.”

Responsible Travel is pushing for a “green flying duty” to be added onto flight ticket costs in the UK. While the UK government charges Air Passenger Duty (APD) on all tickets — currently £13 ($17) for a short-haul fare and £78 ($100) for long-haul — that money goes into general government coffers.

Roe argues that APD should be increased and the funds ring-fenced to fund research into greener aviation and improve railway connectivity.

The company is also pressing for aviation fuel to be taxed, which it is not in the UK or Europe — effectively giving airlines a £10 billion annual tax break in the UK alone, says Roe.

Childs argues for a frequent flier levy and says that until zero-carbon fuel is developed, we simply need to fly less.

“The industry needs to recognizes there’s no quick fix, get out of jail free card,” he says. “We do need to make progress on electric planes, but ultimately if the aviation industry really wants a future, it needs to have zero-carbon fuel.”

Airplanes powered by carbon-neutral fuels are decades away, he says — but the potential is there. “It would be extortionately expensive and the price of aviation would skyrocket — which is why airlines are looking for cheap ways to get around it.”

Rather than carbon-offsetting their current flights, he says airlines must “innovate and make clean fuel as cheap as kerosene.”

In the meantime, he says that easyJet’s announcement is “trying to fob off the regulators and the public from what they know is the reality — that we are simply flying too much.”

Greenpeace UK’s chief scientist Doug Parr, who calls easyJet’s move “jumbo-sized greenwash,” says that the airline should “back a frequent flier levy that will cut the number of flights and the climate-wrecking emissions they pump out.”

“There’s no climate leadership in asking someone else somewhere else to pollute less or plant more trees so you can carry on as before,” he says. “We’re in a climate emergency and mass tree-planting needs to happen alongside reducing emissions from aviation, not as a way to get around it.”

A better way to fly

The reality is that people will still fly. “We’re a travel company — we’re not anti all flying,” Responsible Travel makes plain on its website.

So if carbon offsetting doesn’t work, what should people who still want to fly — while minimizing their impact — do?

Childs says that easyJet would be better off trumpeting its NERD credentials than its carbon-offsetting initiative.

“If offsetting doesn’t work, offering it to passengers is nothing more than a green con — it’s trying to trick people into saying your airline is better than others,” he says.

“EasyJet should be saying that they use the most efficient planes and pack them to the rafters — that’s clearly much better than a business class or luxury flight.

“They ought to be shouting about that rather than suggesting you can fly without causing harm to the environment. Most people understand that.

“Airlines should get their houses in order, fly as efficiently as possible, and stop trying to pretend flying isn’t harmful.”

“We’ve got to move away from the idea of offsetting as a like for like,” she says. “It’s really the industry using them as a means to ease its collective guilty conscience. There’s a feeling that carbon offsetting can tackle the problem, but it can’t.

“The only thing that can tackle it is to start managing demand.”