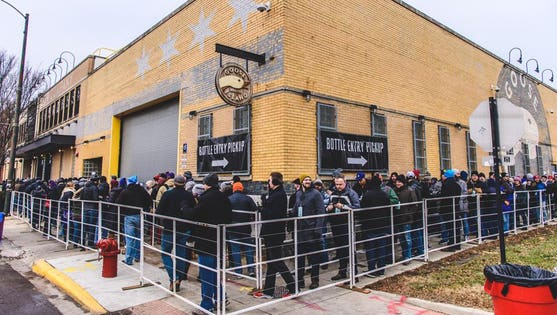 The love for Goose Island Bourbon County Stout was practically palpable in the air on Sunday, which marked the fourth annual Prop Day for the Chicago-based brewery.

Closing down all the streets around Goose Island Beer Company, about a thousand or so beer fans were allowed a sneak peak of this year’s eight variants of the stout, which will be officially released on Black Friday at the brewery and at liquor stores around the country. Where as the line for Black Friday starts as early as the Wednesday before Thanksgiving at the Fulton Street brewery, and it’s a first-come, first-serve happening, Prop Day attendants are determined by a lottery.

Several thousand fans entered the lottery – including several fans from other countries – and some sent in special “Dear John” letters, in trying to win acceptance. This year, some fans even traveled to Chicago from São Paulo, Brazil. But still more came from the brewery’s backyard. “This is everything I could have hoped for and more,” says Chicago resident Danny Torello.

Greg Hall, who created the stout back in 1992 and who now is the owner of Virtue Cider, comes back every year for stout events. “This is a national holiday for beer lovers,” Hall says. “The cool thing is, it’s not just us anymore. Barrel-aging is a thing now.”

But back when he aged his first brews in barrels, Hall just wanted to give it a try. “I never thought beer would become like this,” he says. “It’s fantastic to see the level of interest.”

Hall says he’s partial to the original because “it always has a fantastic balance.” But he also liked the wheatwine because it was “very delicate.”

Vendors were also selling products made with the stout.  At Lillie’s Q, walking tacos were served with pulled pork and a South Carolina-style barbecue sauce made with the Café de Olla stout. “We only made 500 bottles, and we had an event with Goose Island last week, and we sold 200,” says Charlie McKenna. “Once we’re out, we’re out.”

Scofflaw, a gin-focused cocktail bar in Chicago, was on hand, sampling out bitters made with the stout. “Last year, Goose Island asked if I could make some bitters with their stout, and this year, they asked again,” says Luke DeYoung, beverage director.

Paulina Market infused chili samples with the stout, and they were also grilling brats and selling brats infused with the stout. “We love doing (events) with other Chicago businesses,” says Bill Begale, owner.

“This liquid made me want to buy a plane ticket,” says Bret Hollander, of Connecticut. “I’m very excited to be here.”