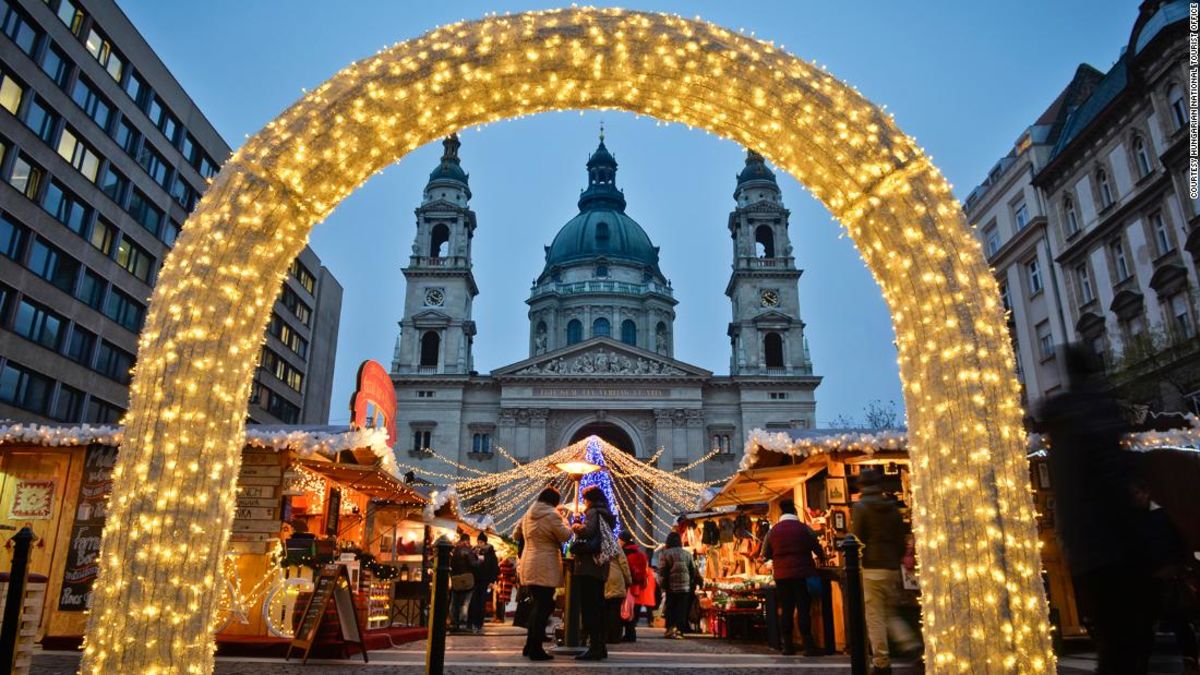 Rich in culture and steeped in tradition, winter here not only feels like a fairytale, it looks like one, too.

An array of seasonal delights draw visitors from around the world to the “Pearl of the Danube,” all chasing that magical travel experience.

Its Christmas markets and outdoor ice skating rinks help to create a perfect winter wonderland, while the local spas and thermal baths offer a twist on outdoor bathing.

Here are 10 top things to do in Budapest during the winter:

Central European Christmas markets are what dreams are made of, but Budapest’s offerings are a cut above the rest. Mulled wine, Christmas strudel, traditional dishes and arts and crafts line the stalls at both the Vörösmarty Square and St. Stephen’s Basilica Christmas markets.

Taking place from November until early January each season, the markets welcome large visitor numbers from right around the world and deliver an authentic Hungarian Christmas experience you’ll never forget.

The Vörösmarty Square market is one of the most popular in central Europe as well as one of the oldest in Hungary. Famous for its traditional Hungarian foods, including lángos, chimney cake and local sausages, you’ll have a plethora of goodies to choose from at the more than 120 stalls.

Meanwhile, the St. Stephen’s Basilica Christmas market sits in front of the spectacular Basilica building, with over 160 stalls full of cakes, sweets, arts and crafts, mulled wine and traditional Christmas gifts. Admission to both markets is free.

Budapest’s City Park Ice Rink is by far the most famous skating destination in the region, if not Europe. Nestled directly in front of Vajdahunyad Castle on the edge of City Park, skaters flock to the rink each winter between late November and mid February.

First opened in 1870, this ice rink one of the oldest and largest in Europe. It’s filled up with water during the summer months and serves as a boating lake for tourists looking to pedal around while basking in the sun.

Just a stone’s throw from Heroes’ Square and Széchenyi Baths, the City Park Ice Rink is the perfect way to end a day of sightseeing and soaking up the steam in the nearby spas.

St. Stephen’s Basilica is truly a beautiful piece of architecture, but what makes it even more pleasing to the eye is the spectacular light show that takes place there throughout the year.

The winter season offers the best light show experience, where religious stories and fables are recited with colorful lights and accompanying sound. Dazzling 3D animations are beamed onto the front of the building, often creating the illusion that it’s moving or falling down. Breathtaking and groundbreaking, catching the Basilica light show is a must when visiting Budapest.

The light show takes place every half an hour between 4:30 p.m. and 10 p.m. during winter.

The Gellért Baths are always worth visiting, whatever the season.

Budapest is quite rightly nicknamed the “City of Spas,” thanks to its 118 natural thermal springs that deliver 70 million liters of therapeutic waters each day to more than a dozen spas. The Turkish baths of here are astonishingly beautiful, renowned the world over for their relaxing and medicinal benefits.

Taking a dip in the famous Széchenyi Baths during winter is an experience like no other. Jumping from one of the 10 indoor pools to the outside bathing area is a memorable — and even pleasurable — jolt to the system.

The Hungarian State Opera House is closed for renovations, but visitors can still see parts of its via guided tours.

Designed by renowned architect Miklós Ybl, the Hungarian State Opera House, which was completed in 1884, remains exactly the same as when it was constructed more than 130 years ago.

The impressive building is regularly used in blockbuster films and has become an iconic national treasure. Each year thousands of visitors descend upon Budapest to take in the sheer beauty of the opera house, while the lucky ones are able to secure a ticket for a show.

Admirers of both ballet and opera are drawn to this location due to the high quality performances of shows including “The Nutcracker,” “La Boheme,” “Billy Elliot,” “The Magic Flute” and “Tosca.”

The Opera House is currently closed for extensive refurbishments, but tours of this spectacular building are still available.

The Christmas trams are a popular city landmark.

Covered with over 39,000 lights, the Budapest Christmas “light tram,” or Fényvillamos, is put into operation across the city from 5 p.m. each evening throughout December and early January.

A quirky and novel attraction, it certainly gets visitors into the Christmas spirit while taking in the sights of Budapest during the winter months. The 50-year-old Ganz UV tram mainly circulates on tram line 2, but it does run on other lines in other parts of the city.

No special tickets are needed to ride the tram, standard tickets are valid for travel. There are no services on Christmas Eve and New Year’s Eve.

Winter cruises are an ideal way to see the city during the festive season.

The River Danube stretches through the heart of Europe from Germany to the Black Sea, Budapest being one of the prime locations.

Extremely popular in both the summer and winter months, tourists from all over the world take to the river to catch a sight of landmarks like the Parliament Building, Buda Castle, Liberty Statue and Margaret Island, which can all be seen from the river.

If you’re staying in Budapest for just a few days, the best way to experience the city is to take one of the River Danube winter cruises which last a few hours and stretch from one end of Budapest to the other.

Day or night cruises are available and vary in price depending on what package you choose. The most expensive include a three-course lunch or dinner with drinks, while the cheaper options consist of a comprehensive sightseeing tour.

Budapest’s ruin bars deliver interesting and unique locations that are perfect for grabbing a drink and seeing the city at the same time. Various derelict buildings and outdoor spaces have been transformed into bar and restaurant areas serving reasonably priced food and drinks all year round.

Szimpla Kert in the Jewish Quarter was the first ruin bar to be established in the city, while Ankert in the 6th district puts on themed nights throughout the week. There are over a dozen ruin bars dotted about Budapest and special tours are often put on to allow reveler to experience the city while tasting local wines and Unicum, a herbal liquor, at the same time.

The ruin bar winter season is particularly impressive, with discounted drinks and seasonal delights on offer to get the festive season off to a great start.

Shopping in Budapest during winter is a magical experience. Not only will you be able to browse the finest boutiques but you’ll also soak up the Christmas spirit on the beautifully decorated boulevards.

Andrassy Avenue and Fashion Street are two of its most popular shopping and tourist destinations at any time of year.

Stretching between Heroes’ Square and Elizabeth Square, Andrassy Avenue houses Gucci, Ralph Lauren, Louis Vuitton, Burberry and Rolex to name a few. Covered with thousands of lights, the tree-lined avenue comes to life during the winter months, offering up many Christmas-themed attractions.

Meanwhile on Fashion Street, there’s a large selection of boutiques lining the walkway that leads to Vörösmarty Square. The bustling street has become a huge tourist attraction thanks to its displays and installations, which help make the winter season that little bit more special.

The view from the Fisherman’s Bastion in the Castle District is even better when the city is covered in snow.

Buda Castle and Várkert Bazár are the jewels in Budapest’s crown. The iconic Buda Castle is a powerful, beautiful and imposing building that overlooks the city, while the Castle Garden, or Várkert Bazár, brings together art and nature with a selection of bars and restaurants and a space for outdoor events.

Both venues offer concerts, literary events, theater and ballet productions all year round, but the winter season is a highlight thanks to its Christmas advent calendar. Throughout December, the castle grounds showcase performances by local poets, authors, actors and ballet dancers.