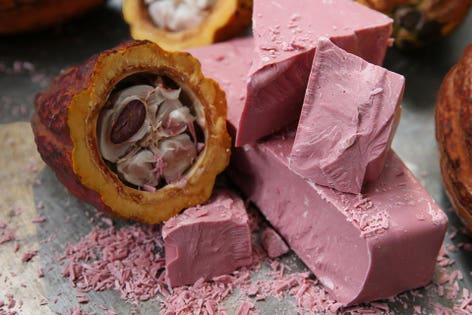 Swiss cocoa processor Barry Callebaut has been granted a temporary marketing permit (TMP) by the FDA to market its naturally pink-colored and berry-flavored Ruby as chocolate in the U.S.

The product, which has caused a worldwide sensation since its 2017 debut in Shanghai, has been adopted by various pastry chefs and chocolate manufacturers for purposes including boosting food flavors and product innovations.

Nestlé became the first large confectioner to produce KitKat with Ruby and launched the product in countries such as Japan, South Korea, Australia and the UK.

However, Ruby has been not able to be labeled as chocolate in the U.S. until now since it did not fit FDA’s code of regulations that define food categories based specific ingredients and the percentage of ingredient compositions.

Ruby was invented by extracting certain compounds from Ruby beans, which can be found in Côte d’Ivoire, Ecuador and Brazil, according to Barry Callebaut.

The company submitted a TMP proposal to the FDA in early 2018 after realizing the product did not fit in any of the three existing chocolate categories — white, milk and dark — defined by U.S. food regulators.

“With the approval of this TMP, we will move forward with our customers in introducing Ruby as chocolate to the U.S. market,” CEO and president of Barry Callebaut Americas, Peter Boone, said.

He added this is also an important step towards establishing Ruby as fourth type standard of chocolate.

A Barry Callebaut spokesperson noted the marketing permit will expire after 15 months, but can be extended multiple times.

“The review process for a TMP is complex and unpredictable — it can take a few months,” the spokesperson told me via an email, adding it will probably take years before Ruby gets a standard identity, “like [what the FDA] did with white chocolate. That’s also why it is very useful that the TMP can be extended several times.”

Barry Callebaut believes standardizing Ruby as a chocolate type in the U.S. is legitimate since it is made from cocoa beans and contains principal ingredients used in regular chocolate.

“[We] have developed Ruby to have the same smoothness, texture, and function as chocolate products currently on the market, but with a unique berry flavor profile and color appearance without added berry flavors or colors,” it said.

Large chocolate companies including Ferrero and Mars did not immediately comment on whether they will use Ruby in their future chocolate products.

Hershey has yet to give me an update, but said: “In the past, we have had no intention to buy Ruby chocolate or use it in our products.”