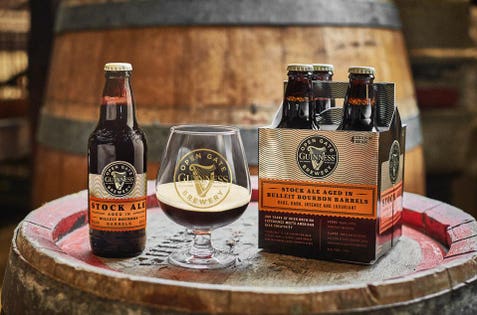 Beer and bourbon are one of those matches made in boozy heaven. And, keeping with its promise to focus on barrel-aged beers, the Guinness Open Gate Brewery in Baltimore announced its newest edition to the barrel-aged family: Guinness Stock Ale Aged in Bulleit Bourbon Barrels.

This is the second nationally available barrel-aged beer from the Baltimore offshoot of the Irish staple.

For Guinness Open Gate’s senior brewer, Sean Brennan, the new release has been an opportunity to craft a beverage that has nuances and personality, along with complex flavors and aromas.

“One of the really cool things about brewing a stock ale is that you actually get to brew two completely separate beers with unique traits and their own identities, and then blend them together to create a beer that takes on some of both, but also has a life of its own,” he says.

Guinness Stock Ale Aged in Bulleit Bourbon Barrels is a blend of high gravity stout and malty barleywine, which lead to a hearty and full-bodied beer. Notes of nutty chocolate, raisins, roasted barley and sweet dark fruit hit the palate, while complementing aromas of vanilla, coffee, stone fruit and ripe berries add to the sipping experience.

Barrel-aging beers, explains Brennan, isn’t a new process, but is one that allows for a unique flavor profile, an answer to the call for fresh, layered and carefully crafted brews. And, he says, the flavor imparted on the beer is from more than just the remnants of the spirit.

“When beer is aging in a barrel, it not only pulls in the flavors of the liquid previously in the barrel — Bulleit Bourbon in this case —but the beer is also impacted by small amounts of oxygen that’s able to get into the barrel through the wood staves that make up the barrel and surround the liquid,” says Brennan.

And, Brennan says, this is a trend that he sees growing in the foreseeable future, especially as beer drinkers become more sophisticated.

“Barrel aging can give you an endless variety of flavors that all beer lovers can be excited about. As beer lovers look to share well-crafted beers they’re excited about with their friends and family, barrel aged beers, with their big, complex flavors and attention to detail, will continue to be the shareable beers for those special times,” he says.