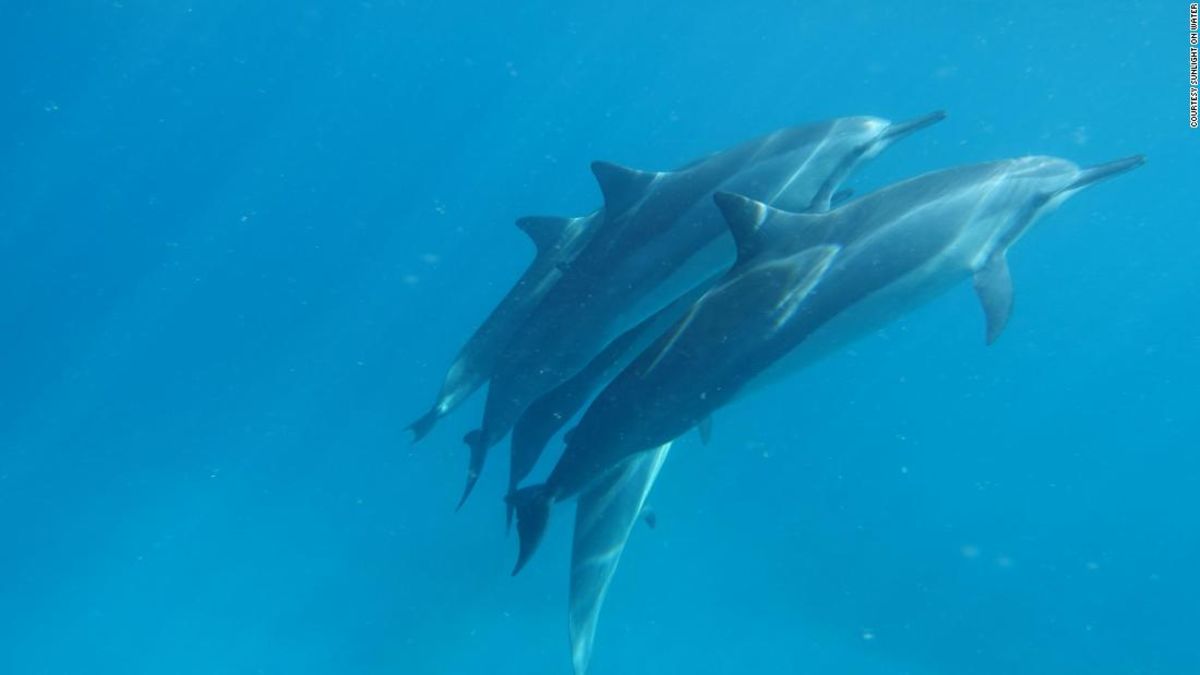 Hawaii Island (CNN) — On the west coast of Hawaii Island, the sun rises over tall volcanoes and glints off the vast blue Pacific in Honokohau Harbor near Kailua-Kona. Tourists climb aboard waiting boats in the bright morning light, giddy at the prospect of swimming beside the island’s famous spinner dolphins.

Frolicking next to dolphins is on many people’s travel bucket list.
In Hawaii, swimming with wild dolphins is possible and popular — partly because these marine mammals keep showing up near shore to greet their human visitors.

Some scientists and conservationists are worried about the sheer number of high-speed tourist boats connecting humans to dolphins.

Spinner dolphins inhabit tropical waters around the globe and are a member of the toothed whale family. These slim, agile, gray and white dolphins are most famous for leaping high out of the ocean and spinning in circles through the air. The Hawaiian spinner dolphins are a subspecies found throughout this Northern Pacific island chain.

And around the island, spinner dolphins seem just as curious about people as we are about them.

Although humans and spinner dolphins have been interacting harmoniously for decades, some scientists and conservationists are worried that the dolphins may be stressed by the sheer number of people who seek close encounters with these charismatic marine mammals — many of them carried by high-speed tourist boats.

Dolphins’ human-like behavior and curiosity about people endears them to visitors and locals.

Over the past 10 years, the demand for boat-based dolphin swim tours has spiked, driven in part by numerous social media images of tourists floating alongside dolphins.

To address the increasing pressure on spinner dolphins, the National Oceanic and Atmospheric Administration (NOAA) proposed a rule in 2016 to ban swimming within 50 yards of the animals. Over 22,000 public comments were received on the draft rule, reflecting the decades-long debate about whether interacting with dolphins is good or bad for the animals.

One of the agency’s main concerns is that swim tours may be disrupting the dolphins during their daytime resting period, when the animals recuperate from their nocturnal forays into the open ocean for fish.

Kurtz says that if NOAA’s proposed rule is implemented, it would help address the impacts on the animals from repeated close approaches with boats and people.

The final rule is expected out in the spring of 2020.

But like any rule, this one will have exceptions — including instances when dolphins approach swimmers of their own volition.

Few other animals hold as much fascination for people worldwide as wild dolphins, perhaps because of their human-like behavior and their reciprocal interest in humans.

“Dolphins are the hippies of the sea. They’re all about love, fun and play,” says Eric Schmidt, who works for Sunlight On Water, a dolphin swim company in Hawaii.

Tourists aren’t the only ones who seek out intimate connections with Hawaii’s dolphins. Residents of the Kona Coast have been swimming with wild spinner dolphins for over 30 years. Some people even move to Hawaii Island specifically to be close to the dolphins because they feel a spiritual affinity for the resident spinners.

Residents of the Kona Coast have been swimming with wild spinner dolphins for over 30 years.

Locals gather on beaches each morning and swim out to see pods of spinners, named for their graceful leaps and impressive rotational flips in the air.

Remarkably, these wild animals appear out of the deep blue more often than not to meet the swimmers.

Joan Ocean, 79, is a counseling psychologist who has swum beside dolphins thousands of times since moving to Hawaii 33 years ago. She points out that dolphins can move through water much, much faster than we can.

“It’s always the dolphins’ choice,” says Ocean. “If they decide to swim with us, then we mimic their behavior — when they seem quiet, so are we.”

For the past three decades, Ocean has advised fellow swimmers, boat crews and marine lifeguards to follow a few simple principles: enter the water quietly; never swim over top of them; float or kick calmly with arms at your sides; and never touch a dolphin.

“If we float respectfully and don’t chase them, they come close to us and stay near us to play,” she remarks.

Ocean has also swum with whales and dolphins in 20 other countries, and she believes that the human-dolphin interactions in Hawaii are unique.

Biologists, however, are worried about the cumulative impacts on spinner dolphins from the sheer number of interactions with people.

Lars Bejder, director of the Marine Mammal Research Program at the University of Hawaii at Manoa, says that although spinner dolphins might be curious by nature, that doesn’t mean interacting with hundreds of humans each day is necessarily good for them.

Spinner dolphins feed at night, heading offshore to hunt for fish in pods. Each morning they swim back toward shore to rest, socialize and avoid predators. They spend their days resting in the same four or five bays along the leeward side of Hawaii’s Kona Coast.

“Their dining room is the open ocean while their bedroom is a calm bay. These dolphins constantly have people in their bedroom,” explains Bejder.

Marine mammals don’t sleep like we do. Instead they turn off half of their brain at a time, continuing to swim slowly so they can rise to the surface to breathe.

One recent study found that spinner dolphins are exposed to human activity 83% of the time they are resting in bays along Hawaii Island, with an average of just 10 minutes between exposures.

Although this study found no effect on spinner dolphins’ resting behavior, Bejder says it’s not easy to immediately document effects on the population because they are a long-lived species.

“Constant disturbance may diminish the dolphins’ cognitive abilities over time, just like humans who don’t get enough sleep,” says Bejder.

Tourists who are drawn to Hawaii Island to see dolphins and whales are an important source of revenue for Hawaiian communities.

A study completed in 2016 estimates that the direct annual revenue from spinner dolphins off the Kailua-Kona region of Hawaii Island is $44 million. The study also extrapolates that each individual dolphin generates up to $1.6 million over its lifespan of roughly 25 years.

The proposed NOAA rule has many dolphin swim tour operators worried about losing revenue. But some companies have already voluntarily switched to more sustainable dolphin viewing practices, and most of the companies urge swimmers to follow the same etiquette espoused by Ocean to respect the dolphins.

Colin Cornforth, owner of Captain Zodiac Raft Expeditions, teaches his boat captains to look for resting behavior so they know when to leave the animals in peace. He also has a strict rule that his boats leave the dolphins alone by 9 a.m. each morning, whereas other boats might “chase” the dolphins later into the day.

Around Hawaii Island, spinner dolphins seem just as curious about humans as we are about them — but that may not always be in the animals’ best interest.

Operators’ behavior can be especially troublesome, he says, referring especially to third party booking agents who often promise visitors they’ll be able to swim with dolphins. Cornforth, however, is adamant about his company’s policy about post 9 a.m. swimming: They don’t allow it.

“A lot of us who have been around for quite a few years feel that some regulations are necessary now for the simple reason that people love them too much,” says Cornforth.

Adam Kurtz of NOAA agrees, emphasizing that the agency does not want to condemn the practice of viewing wild dolphins.

“Getting people excited about marine mammals has education and conservation benefits. We just want it done in a way that’s responsible and sustainable over time,” says Kurtz.

However, some tour operators, scientists and dolphin-swim advocates alike are skeptical of NOAA’s proposed 50-yard “no approach” rule.

“You won’t be able to tell if a dolphin approached a human or vice versa,” says Cornforth.

From an enforcement perspective, many people think it would be easier to implement timed area closures in the spinner dolphins’ main resting bays off Hawaii Island. This would ban boats or swimmers from approaching dolphins during their peak resting hours.

Cornforth points out that up until recent years, people were happy viewing dolphins and whales from atop the water. He believes people can still have a “tremendously positive experience” watching spinner dolphins from a boat.

As it is, Captain Zodiac Raft Expeditions only offers dolphin swimming twice a week, but if the no-swimming rule is enforced, Cornforth says he’d have no issue abiding by it.

“I hope that as a community we can all agree that we want these animals to be healthy so future generations can enjoy them, too,” says Cornforth.