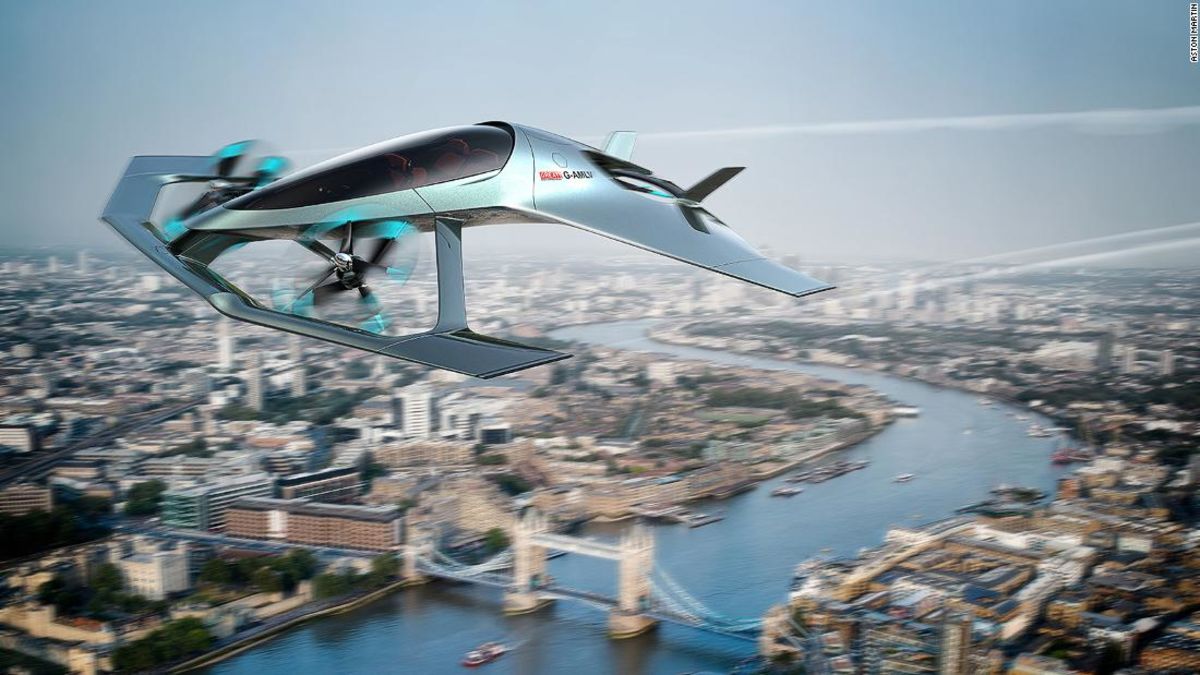 (CNN) — Once upon a time, flying cars were a staple of science fiction.

And yet here we are, in the November 2019 once dreamed of in the 1982 movie “Blade Runner,” and we’re still not whizzing above neon-lit cityscapes in futuristic contraptions.

However, the long-expected travel convergence between automobile and aircraft may finally be about to unfold.

This is a pivotal time for the auto industry, with new automation and electrification technologies threatening to disrupt a century-old business model.

It’s not surprising, then, that some of the major names in the automobile industry have set their eyes on the nascent field of personal air mobility.

Firms such as Porsche, Daimler and Toyota are behind some of the most daring startups in the nascent eVTOL (electric vertical takeoff and landing aircraft) industry, that aims to revolutionize urban transportation by taking to the air.

According to this vision, we will move around cities in fleets of electrically powered, lightweight air vehicles capable of vertical takeoff and landing that can be summoned at the click of an app.

These vehicles will be as ubiquitous in the urban landscape of tomorrow as their ground-based equivalents are today.

Sounds far-fetched? Some cities, such as Dubai, have already been testing the concept in a limited way. The emirate is drawing up plans for an eVTOL roll out.

For automakers, the emergence of new mobility technologies is, at the same time, a threat — diverting journeys from their core ground transportation business — and an opportunity to redefine themselves as mobility providers in a broader sense.

It might look like something from a futuristic sci-fi movie — but the Volocopter is launching next year.

Daimler, best known for its Mercedes luxury car brand, is an undisputed pioneer when it comes to car-making, thanks to its historical link to Karl Benz, who in 1885 built the Benz Patent-Motorwagen, regarded as the world’s first production automobile.

The German firm may be on the cusp of repeating this feat through its investment in Volocopter, an all-electric vertical lift aircraft with capacity for two passengers and specially designed to be flown in urban environments.

Daimler’s innovation arm, called Lab1886, is one of the investors behind this startup that has already completed its first flight in a European city and is in the pole position for a Dubai roll-out in the near future.

Volocopter has also caught the eye of Chinese automaker Geely (owner of Sweden’s Volvo as well as a major Daimler shareholder), which recently led to the successful closure of a €50 million investment round.

CNN’s Susan Candiotti takes a look at a flying car at the 2012 New York car show.

But this isn’t Geely’s only investment in the field of air mobility. The Chinese automaker is hedging its bets by also investing in California-based Terrafugia.

Remarkably, Terrafugia’s concept resembles a proper “flying car,” such as those imagined by science-fiction writers of yesteryear.

The aptly named Terrafugia Transition is able to drive on roads and fit in a garage, just like any normal car, but can also, at the user’s command, deploy a set of wings and take off and fly like an airplane.

Not to be outdone, Japanese automaker Toyota is also getting into air mobility through its venture capital arm.

Toyota AI Ventures is an investor in California-based Joby Aviation, which proposes a manned eVTOL electric aircraft able to carry five passengers 150 miles (240 kilometers) on one charge. In its product pitch, Joby highlights the speed and quietness of its vehicle compared to other alternatives.

The startup is still in stealth mode, but has already received some $130 million in venture funding. Its backers include some prominent Silicon Valley investors and JetBlue Ventures, the venture capital arm of the airline of the same name.

Jim Adler, Toyota AI Ventures’ founding managing director, told CNN Travel, “One of the areas we’ve been exploring is technologies that fundamentally change the way people move around — on land, at sea or in the air.

Joby Aviation’s vision of delivering safe, affordable, and accessible air-transportation-as-a-service fits squarely in Toyota AI Ventures’ view of the future of transportation: one that is highly networked, increasingly automated, multi-modal and widely available.”

Rolls-Royce unveiled its own eVTOL concept in 2018, which it hopes to launch to market in the early 2020s. It features a tilt wing and six propellers, including four that would fold into the wings at cruising altitude.

Porsche is another car maker to have allied itself with a big aviation player.

The German luxury car maker has partnered with Boeing (through two of its innovation and research subsidiaries, Boeing NeXt and Aurora Flight Services) in order to develop its own “flying car” prototype.

The project is still in its early stages, but the early renderings that have been released so far have an exciting Batman-esque vibe.

The Porsche project: Worthy of Gotham.

Meanwhile, Airbus has its own eVTOL craft, Vahana, which took to the skies at the start of 2018 and recently completed its 100th test flight.

Porsche’s forecasts put the electric eVTOL market at 23,000 units, creating a new market worth $32 billion, by the year 2035. This would be preceded by a decade-long experimentation and roll-out phase, which would define which are the winning concepts from a technical, financial and operational point of view.

If you’re worried about passenger-carrying drones buzzing over your head every which way, there’s no need to panic just yet.

According to the same study, while the first air taxis might start to provide regular service as soon as 2025, during the initial years it would mostly involve simple transfers between airports and the centers of large metropolises.

Even by the year 2035, when the industry is expected to have consolidated, most of the action will be between pre-established hubs that will provide connectivity to other, more traditional, modes of transportation.

In short, the advent of the flying car seems almost inevitable. The big question is whether the big players in this revolution will be the same firms that dominate the car market today.