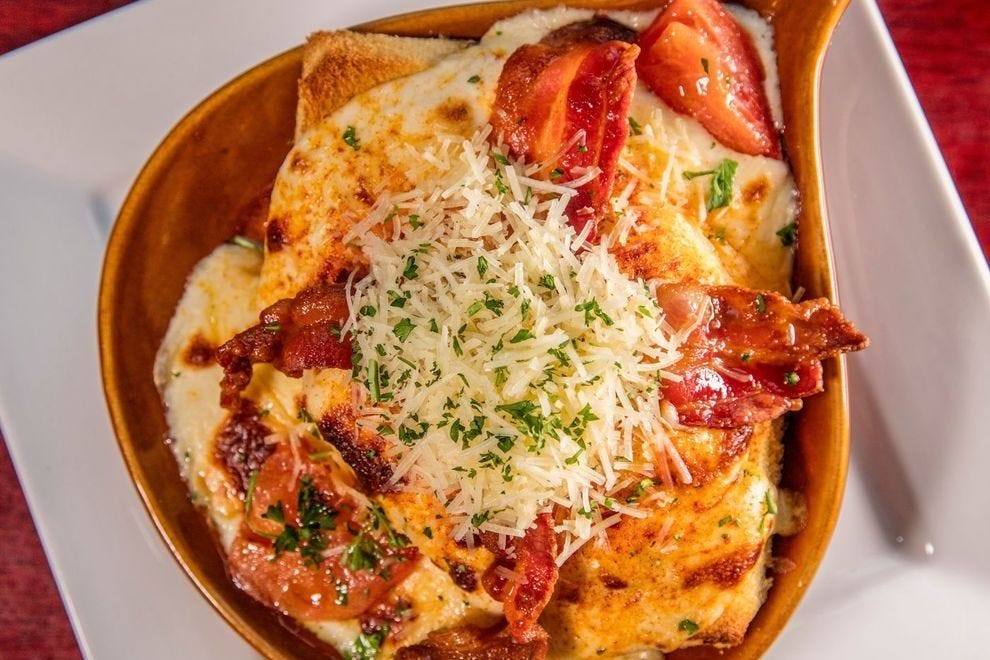 A lot goes into trip planning. Where you stay, what you do and what you see are all important parts of planning a trip. But one of the most commonly asked questions we get at 10Best is “where should I eat?”

When people travel, they want to eat what locals eat; they want to experience cuisine that they can’t get at home. And they want the places they eat at to be monumental in some respects, whether that restaurant is the birthplace of a regional dish or it’s the most popular among locals.

These 10 iconic dishes are so integral to the places they’re from, they’ve become destinations all on their own. Here’s where to go to try them. 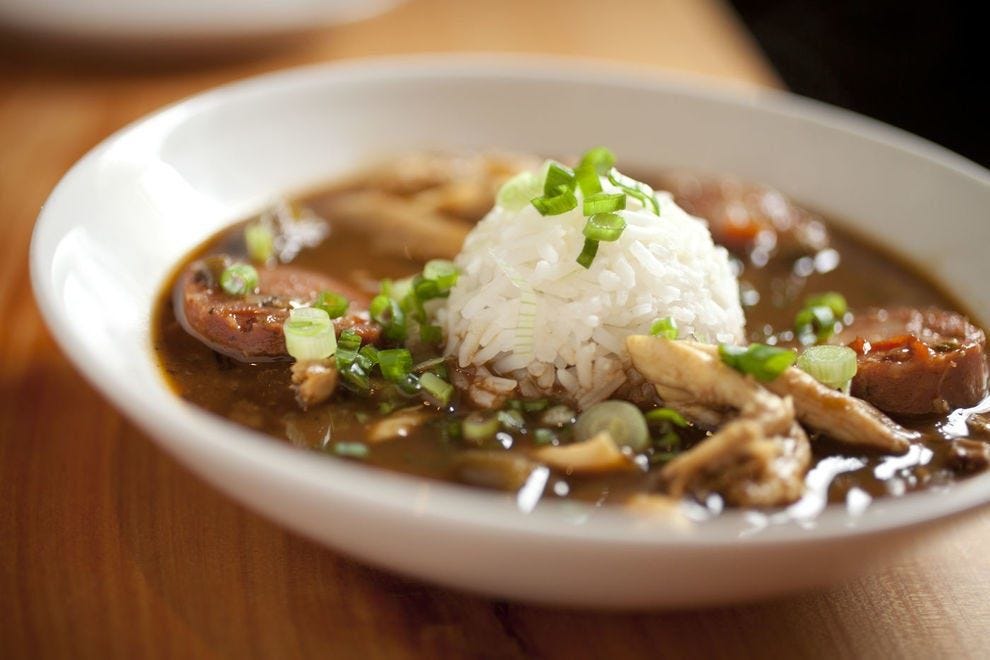 Louisiana is the birthplace of two of the nation’s richest regional cuisines: Cajun and Creole. And though they share similar dishes, the way they’re prepared and what ingredients are used are different, making Cajun and Creole uniquely distinct from one another.

Gumbo happens to be a cornerstone of each of these cuisines, with variations drawing from the state’s diverse cultural influence. For the most part, the dish combines African, Caribbean, European and Native American cultures. The Cajun variation includes the “Cajun Holy Trinity” of onion, celery and bell pepper, and is red from the addition of tomatoes, whereas the Creole take on gumbo has a dark roux as the base.

You could have gumbo for every meal of the day on your visit and still not try every kind of gumbo the state of Louisiana has to offer!

Read more: A quick guide to downhome Louisiana gumbo (and where to eat the best) » 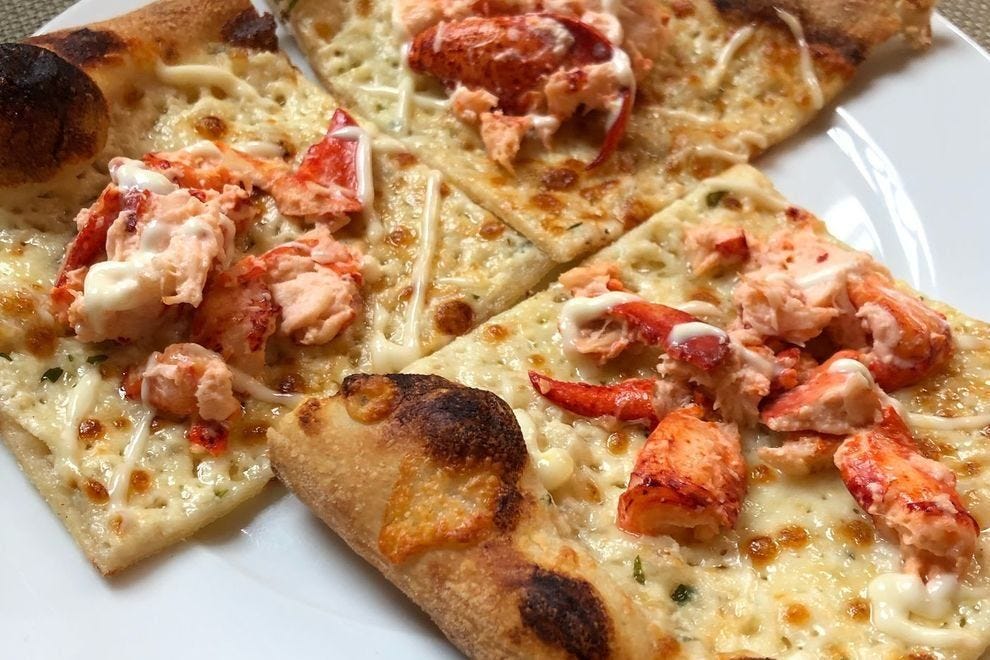 Lobster is synonymous with Maine. Yes, you can get a fresh lobster tail served up with a ramekin of butter, but as 10Best contributor Sarah Maiellano showed us this year, there are plenty of fun and exciting ways to enjoy lobster in Maine.

Spice things up with lobster-stuffed jalapeño poppers on the Schooner Ladona, or kick it up a notch with a lobster Bloody Mary at Cook’s Lobster and Ale. And when you’ve finished your meal, treat yourself to dessert – a creamy vanilla ice cream with chunks of lobster meat served in a waffle cone at Ben & Bill’s Chocolate Emporium. 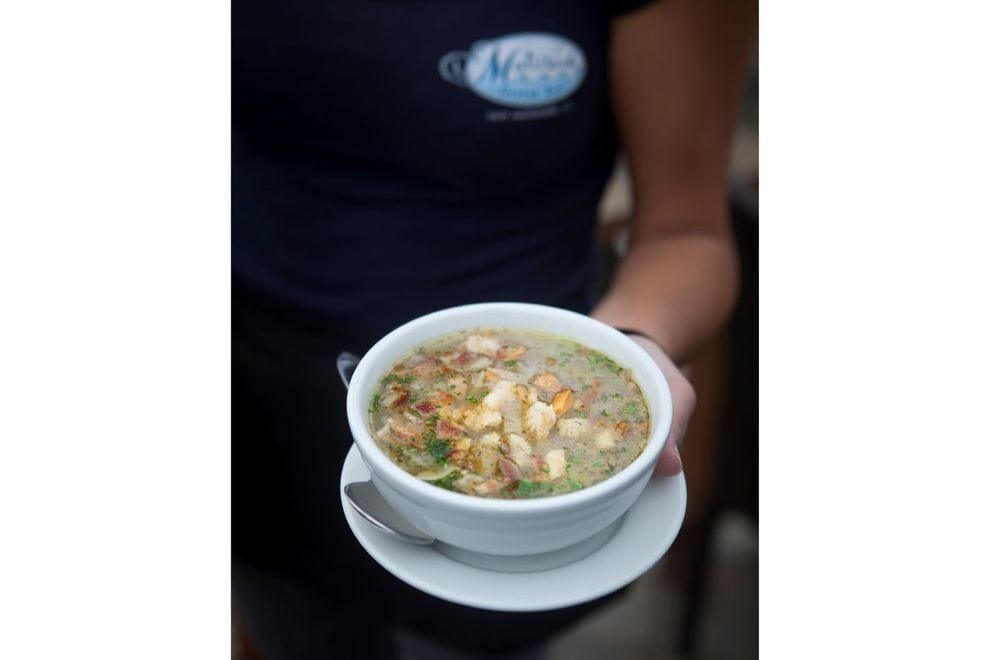 Unlike the other varieties which have thick broth bases of either tomato or cream, the Rhode Island clam chowder is clear. Chowderheads like Matunuck Oyster Bar owner Perry Raso would argue that the clear broth is “the purest way of eating chowder.”

Though it is the lesser known of the chowder world, Rhode Island clam chowder actually predates both the New England and Manhattan varieties, making it New England’s original chowder dish.

If you’re headed north, we here at 10Best say a hearty bowl of Rhode Island clam chowder is worth a try. We recommend Evelyn’s Drive-In in Tiverton, a clam shack that won our Readers’ Choice Award for Best Clams in Rhode Island.

Read more: Rhode Island has its own clam chowder – and it was the first »

There are a lot of things that draw travelers to Louisville, Kentucky. But aside from bourbon, mint juleps and wearing fancy hats to a horse race, the culinary crown of Louisville is the Hot Brown. Texas toast is topped with slices of turkey breast, then drenched in Mornay sauce and finally finished with bacon.

The indulgent Hot Brown is one of the city’s most famous dishes. The best place to try it would be where it was born in 1926 at the Brown Hotel.

Read more: The Hot Brown is the culinary crown jewel of Louisville » 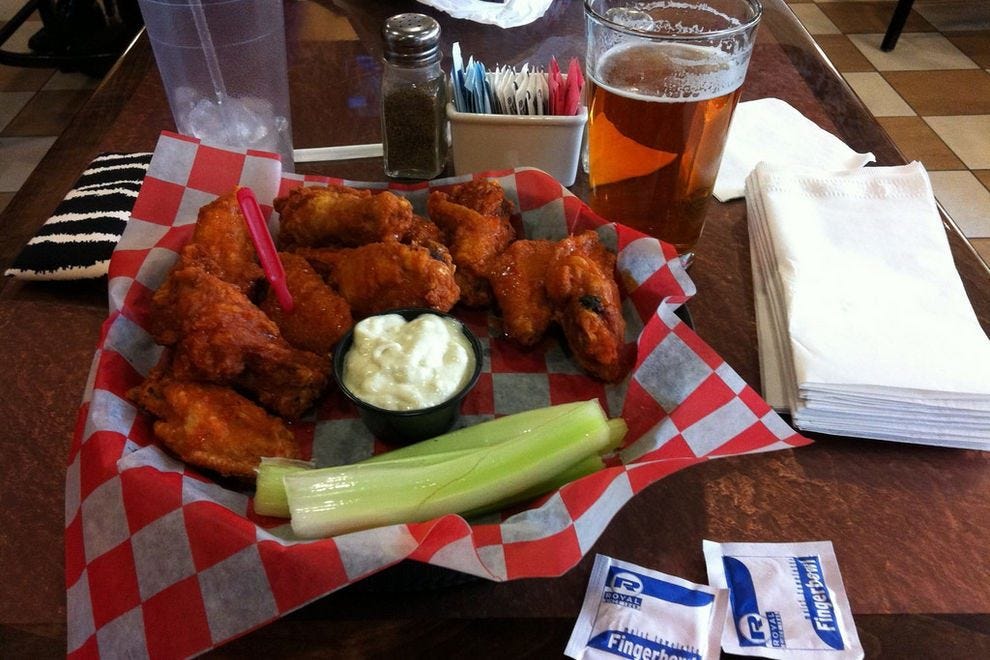 Buffalo has a surprisingly bountiful food scene where locals pledge their allegiance to hot dog joints and keep warm during the winter season with Tom & Jerrys. But there is no Buffalo dish more famous than Buffalo wings.

It might sound strange to travel for a dish that can be found on bar menus around the world, but if you really love Buffalo wings, “then you need to experience them in Buffalo,” explains Arthur Bovino, the author of “Buffalo Everything: A Guide to Eating in ‘The Nickel City’.”

Anchor Bar was where the famous wing sauce was born, but Bovino also says you can get excellent wings at mainstay institutions like Duff’s and the Nine Eleven Tavern. 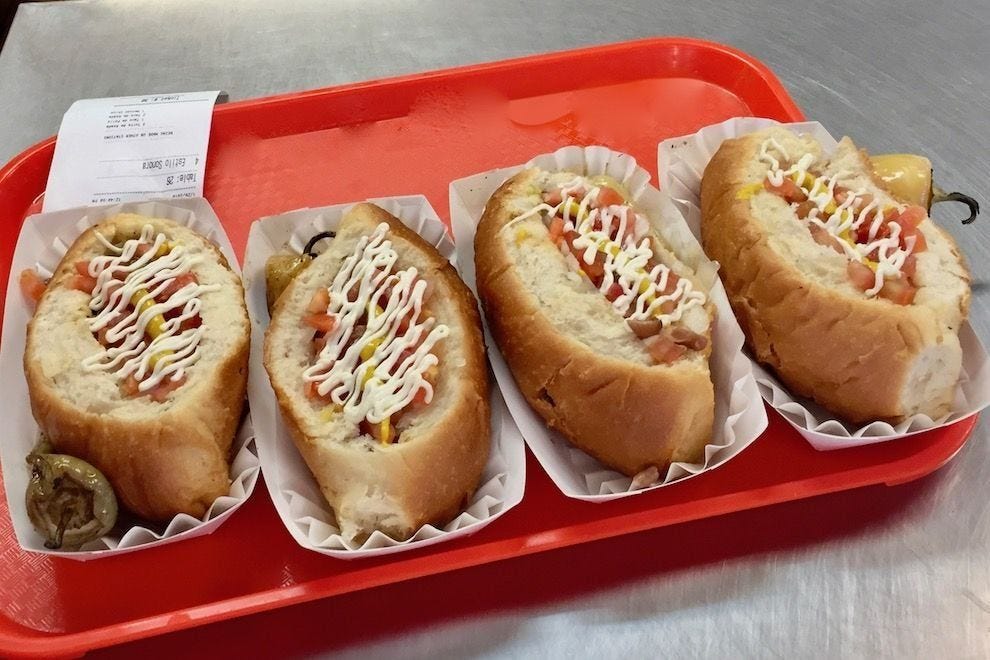 How many Sonoran hot dogs do you think you can eat? — Photo courtesy of Larissa Milne

There are a lot of foods worth traveling for in Tucson – the food capital of Arizona is America’s first UNESCO Creative City of Gastronomy. And among the Sonoran Mexican cuisine you should try is the Sonoran hot dog.

You have to prepare yourself for this classic Tucson street food. It’s a fried hot dog wrapped in bacon that’s topped with chopped tomatoes, onion, jalapenos, mustard and mayonnaise. You won’t find this Southwestern dish anywhere else!

Read more: Where to get the best Sonoran hot dogs in Tucson » 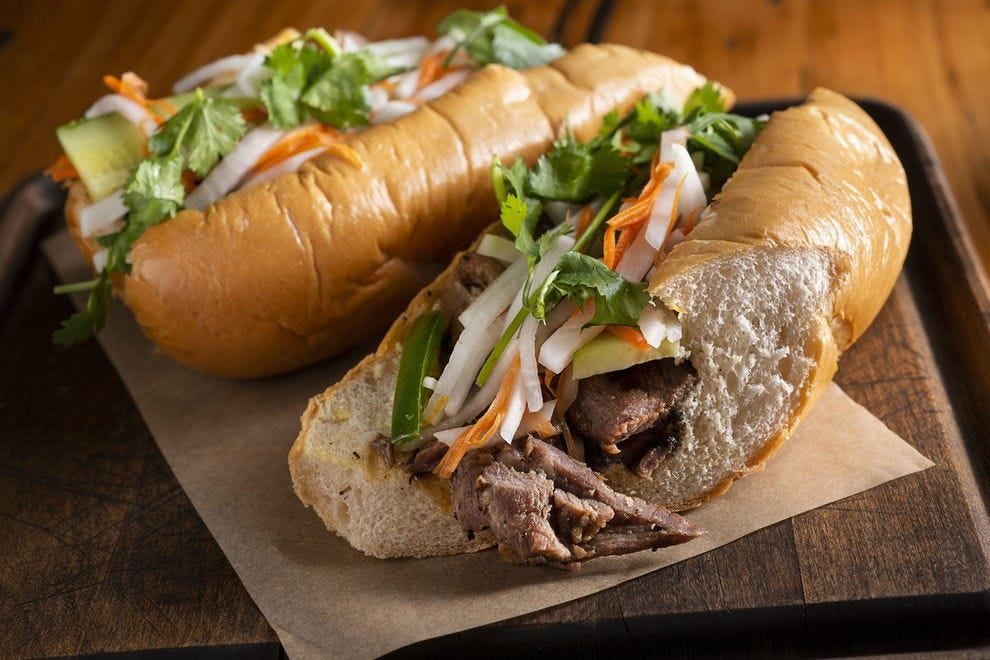 The banh mi sandwich has grown in popularity around the world over the past decade. The Vietnamese dish has become a favorite among lunch-goers and anyone looking for a deliciously filling meal on the go. For food lovers traveling to Ho Chi Minh City, it’s worth stopping by Hoa Ma, the District 3 sandwich shop where it is believed that the first bahn mi was created.

The original is served up a little differently than you may be used to. The sandwich ingredients are served on the side of the bread, so that each diner can construct their own banh mi to their liking. It “helps you see the banh mi complexity in all its tasty glory,””says 10Best contributor Robert Reid.

Read more: The fascinating history of the banh mi » 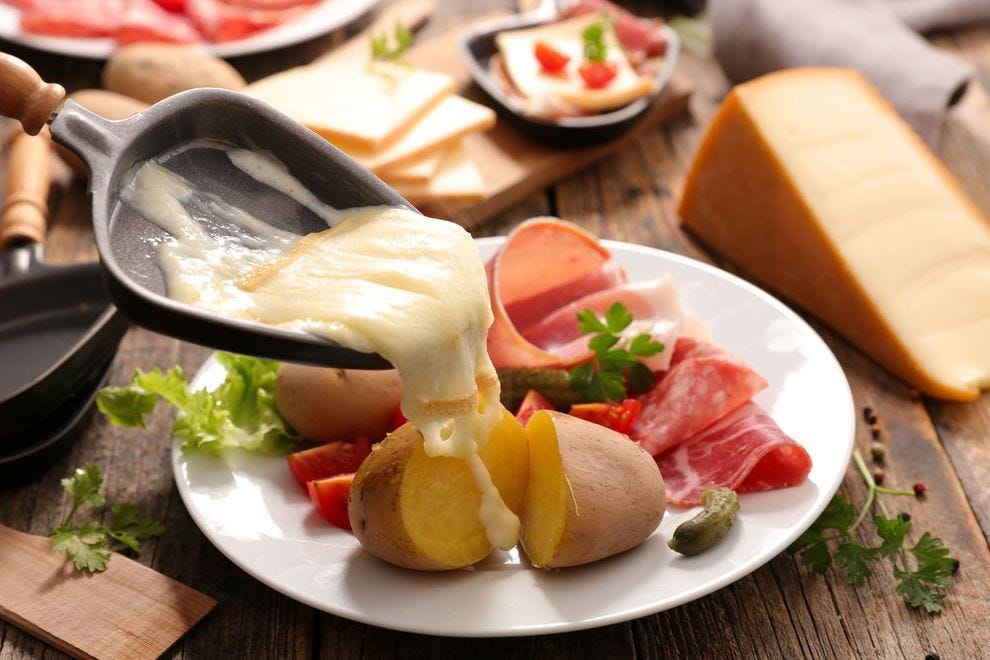 Cheese, please! Raclette is the perfect cheesy topping to a variety of other ingredients — Photo courtesy of iStock / margouillatphotos

Cheese pulls have become a popular social media trend, but long before there were Instagram stories documenting how far one can stretch their cheese, raclette was being served as a dish throughout the Swiss Alps. Raclette is both a cheese and a meal where cheese is melted and then scraped onto a variety of charcuterie-like ingredients.

A raclette meal might include ingredients like boiled potatoes, cured meats, cubes of ham, white onions and cornichon pickles – all of which are enhanced with the mild flavor of the raclette cheese. It’s a delightful meal where every bite has different flavors!

Read more: Everything you need to know about raclette » 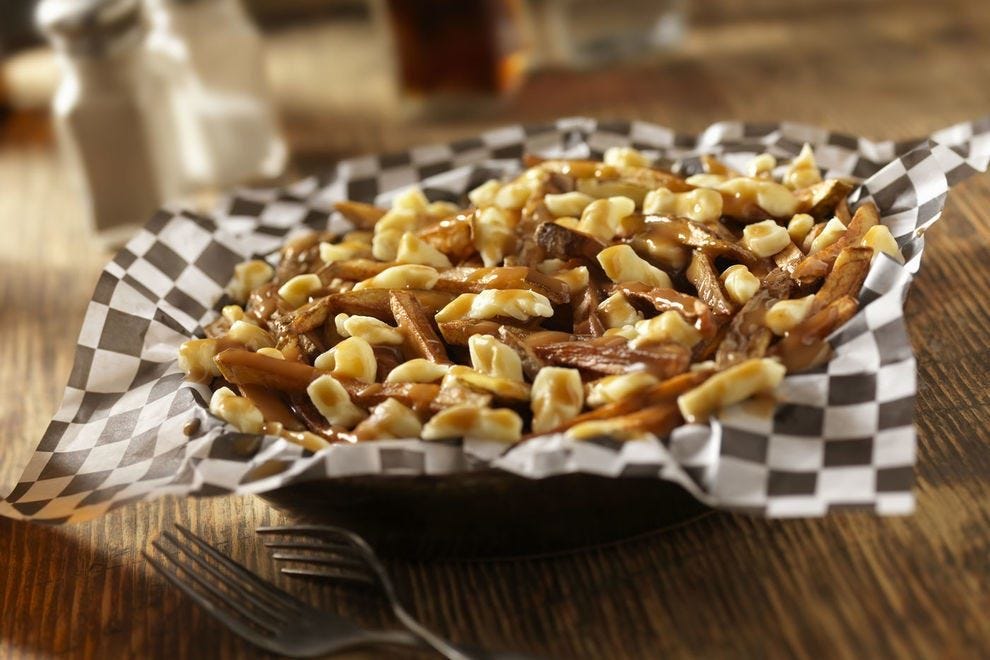 Poutine may sound simple, but to Canadians, it’s not just fries, gravy and cheese curds; making the decision on where to get poutine can be a bit overwhelming. Like any food that becomes intertwined with the identity of a place, locals from Montreal to Toronto have their restaurants that they think serve the best poutine.

On top of that, poutine has evolved into a new medium with twists on the original such as lobster poutine, General Tao poutine and even a foie gras poutine.

10Best contributor Christopher Mitchell says that if you’re not a poutine expert yet, start with the classics. Mitchell recommends going to Montreal and trying La Banquise and Chez Claudette, both late night diners where poutine is done right.

Read more: Here’s almost everything you need to know about poutine » 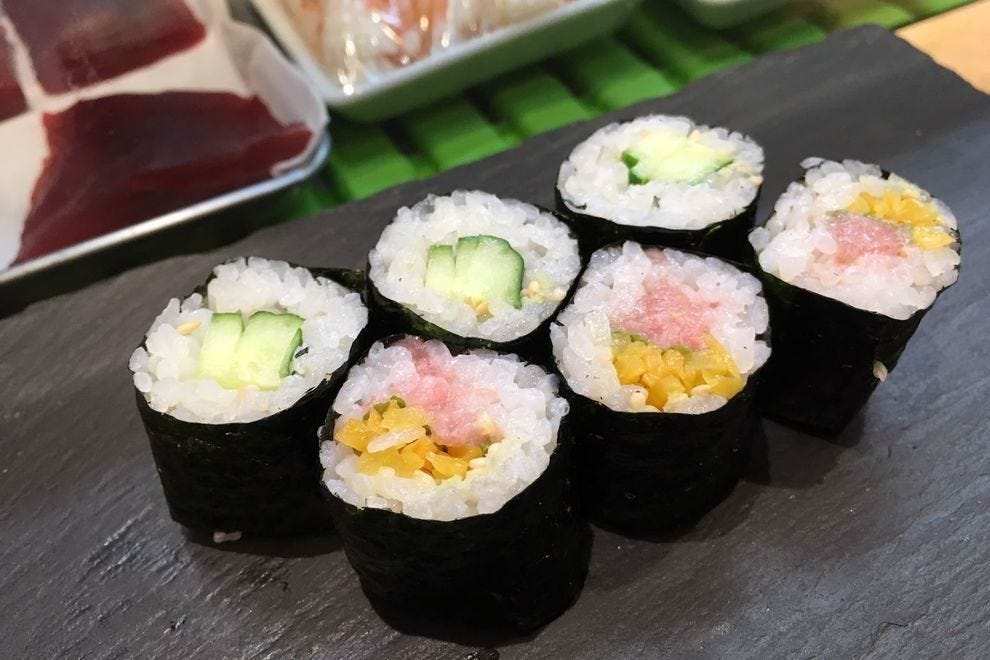 When it comes to culinary techniques, one of the most complex is the art of sushi, a dish that comes in a variety of styles with subtle nuances in the way it is prepared and served, all of which can take a sushi chef years to master. For many, Japan is synonymous with sushi, and some of the most highly-rated sushi restaurants are in the country’s capital of Tokyo.

To experience the culture and finesse of sushi-making and sushi-eating, 10Best contributor Larry Olmsted recommends the Sushi University. It’s a bespoke tour company where you’ll be connected to an immersive sushi dining experience at a small, but highly rated local sushi restaurant.

Read more: Everything you need to know about sushi from Sushi University in Tokyo »