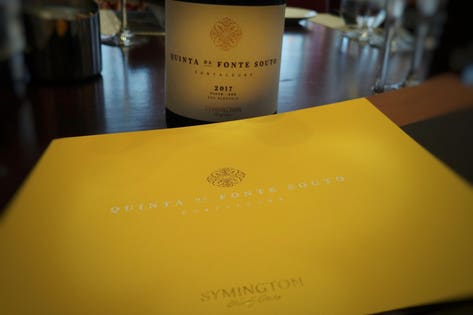 Rupert Symington, CEO of Symington Family Estates, wanted to expand into another part of Portugal and despite his family’s business being deeply rooted in the North with their Douro Port and Douro red dry wines, he found himself going to the southern region of Portugal in Alentejo. He traveled down to Alentejo with a specific property in mind that was for sale but he ended up visiting another property as well with a local journalist who insisted that Rupert see the estate. As Rupert approached the property he was immediately struck by the dilapidated buildings with roofs that were seemingly falling apart that created an understandable inkling of doubt in regards to the state of the property but as he walked past the buildings he was faced with a stunning panorama of 100 acres of vines going up a hill that looked “magnificent” in the golden hue of the sunlight. In that moment he “was sold on the property” and started a long process of negotiations on a contract that closed in May 2017 and eventually renamed it Quinta da Fonte Souto.

Alentejo has certainly helped to encourage interest in Portuguese wine among younger wine drinkers as well as increase the interest of long time wine enthusiasts of the fortified and non-fortified wines of the Douro in the North. It is no secret that there are tensions between those locals who come from the North of Portugal and those who come from the South, like so many other countries. For a long time Portugal was oppressed by the authoritarian dictator Estado Novo, and the military coup (Carnation Revolution) on April 25th, 1974, that overthrew the regime left the South, which was already neglected during the dictator’s rule, in poverty as more international attention was given to the better known areas of the North that already had well-established active trade with other countries such as the shipment of Port wines. During the darker times much of the wine being made in Southern Portugal was of mediocre quality since mandatory, government-run coop wineries prevailed and, until the mid-1980s, it seemed to be an unwelcoming place for anyone with resources wanting to make great wines.

But as the shackles of the post-dictatorship ruins were lifted when Portugal joined the European Economic Community, later becoming the European Union, passionate winemakers and investors were slowly drawn to Alentejo because of the wealth of indigenous grape varieties, as well as some thriving international grapes, in an area that had a wide range of terroir; even some former inhabitants who were estate owners came back to be part of the renaissance of the Alentejo wine region. And so, over the past few years, Alentejo has captured the hearts of many sommeliers in the U.S.

All that said, it was still a surprise that the Symington family would make such a strong commitment of a “20 year project” in a part of Portugal that was a significant distance from most of the other properties they juggle in the Douro as the closer area of Dão would make more sense. But Rupert was not completely sold on buying a property in the Dão, although it is still on the table for future consideration, and the siren song of Alentejo called to him, but his journey to finally finding a property in the Portalegre sub-region of Alentejo, which was beyond his imagination, did not go the way he anticipated.

Among the eight Alentejo sub-regions it is noted that Portalegre “differs the most in originality and character” and the area is known for producing fresher and more elegant wines. Alentejo covers around a third of Portugal – it is vast and diverse, so isolating sub-regions, as well as specific vineyards, are key to even scratching the surface of understanding the potential of this wine region. Rupert knew that he and his family would have to make a big investment into the property in Portalegre but they were gambling on the idea that it had all the key markers of a great estate; soil made up of schist and granite like the Douro (allows for deep vines) but with a bit of clay which gives it a different twist; good supply of water as there are many springs on the property and there is a spring called the Souto that runs through the property that also supplies the town of Portalegre (allowing irrigation only when needed during hot, dry vintages); and high elevations that averages around 1,600 feet with a climate that is generally cooler and wetter than other sub-regions checked all the boxes that the Symington family were hoping to achieve in an estate. The Souto spring as well as the idea that there are chestnut trees on the property was the inspiration for the new name of the estate, Quinta da Fonte Souto, as it generally translates into “the spring of the chestnut trees”. Rupert said they had no interest in buying the already existing name, or wine in stock, as they wanted a clean slate when introducing their wines.

Rupert explained that they were also lucky because one of their winemakers, José Daniel Soares, who was working at their Quinta do Vesuvio estate in the Douro, wanted to move down to the Alentejo and so he has become the resident winemaker for the Quinta da Fonte Souto estate. When Rupert went down to the property to check on the 2017 vintage with his cousin Charles Symington, head of viticulture and winemaking, he had no great expectations as they were still improving the estate but he was happy to see José’s eyes shining as he knew when a winemaker’s eyes shined that meant the wine was good.

“In terms of plantings, what we inherited is dominated by plantings of Aragonês which is Tempranillo [called Tinta Roriz in the Douro] and we are not in love with the Aragonês and so we elected to not make any wine out of Aragonês the first year and sold off the grapes,” Rupert noted, and he also listed the other varieties which included the indigenous Portuguese red varieties Alfrocheiro and Trincadeira, Cabernet Sauvignon, Syrah and Alicante Bouschet – an atypical red grape from southern France that has made its home in Alentejo – and local whites Arinto and Verdelho with vines ranging in age from 15 to 30 years old. Rupert also pointed out that they are top grafting Touriga Nacional, the king of Douro red grapes, on a few acres of the vines. Despite the Quinta da Fonte Souto wines qualifying for the Portalegre DOC designation on the labels, they have opted to place Alentejo DOC while adding the name Portalegre under their estate name. Rupert made a good point about Alentejo just making inroads in export markets and it is important to keep building the reputation of that name while also giving some notice to the sub-region of Portalegre. In the future there will be a tasting room with a living roof that will be inline with Symington’s efforts to be more environmentally friendly and Rupert is expecting it to take two years but with a smirk he said, “I just need to write a check.”

Forming Connections to Fulfill What is Lacking

In most decently sized countries there are deep divisions that are often times represented by a geographical divide, weighed down by a tumultuous history that still seems recent and raw to some sections of the population. That is when the idea that those who can become connectors tying such opposing areas together (to remind them that they are all valued citizens of the same country) becomes necessary for the harmony of a society. The Symington family saw the similarities between the Douro and Alentejo but it was their differences that made Alentejo a thrilling project. Quinta da Fonte Souto is a sign to the wine world that the South should be taken seriously if one of the most prestigious wine families in the North is investing a considerable amount of their resources there. As people look around to the political leaders in their own country for hope, only to be disappointed by them causing more division, it becomes even more vital for those who are key figures in the business world to step up to find ways to create those national ties of pride; there is no better business to represent the culture and sense of community of a country like Portugal than a multi-generational wine producing family who can take a step back and see the bigger picture.

The Symington Quinta da Fonte Souto property is specifically located in the São Mamede mountain range in Portalegre at higher altitudes that reaches its height at 1,800 feet.

2017 Quinta da Fonte Souto, Branco (White), Alentejo DOC (Portalegre): 75% Arinto and 25% Verdelho. Rupert said that both his cousin Charles and resident winemaker José Daniel Soares were given the task to make an elegant white wine which was something that was never an option for them in the Douro. A mixture of subtle tropical and citrus fruits with hints of floral notes and chalky minerality on the finish. Only 600 cases were made. Suggested retail price: $25.

2017 Quinta da Fonte Souto, Tinto (Red), Alentejo DOC (Portalegre): 40% Alicante Bouschet, 25% Trincadeira, 15% Cabernet Sauvignon, 10% Syrah and 10% Alfrocheiro. Bright and aromatic with spice and a touch of rosemary on the nose that was juicy on the palate with black cherries and an extra complex layer of forest floor that had a good amount of weight yet enough structure to give it lift until the finish. 3,555 cases made. Suggested retail price: $25.

2017 Quinta da Fonte Souto, Vinha do Souto Tinto (Red), Alentejo DOC (Portalegre): 52% Alicante Bouschet and 48% Syrah. Dark and deep with smoldering earth, black pepper and a nuanced concentration that overall had a lot of finesse in its delivery which included well-integrated oak and beautiful tannins; a long flavorful finish that was utterly elegant until the end. Rupert noted that 2017 was a hot, dry year but the property had no issues with water due to the springs on the estate as well as the high elevation moderating the heat. Only 785 cases made. Suggested retail price: $55.