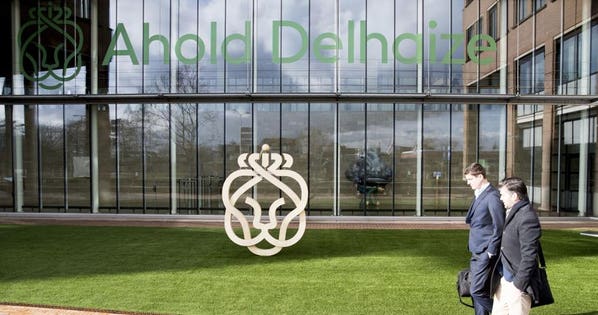 Ahold Delhaize is a Dutch international retailer with 6,700 stores around the world, including Food Lion, Giant and Stop & Shop. The company has been testing cashierless shopping with “tap to go” technology for several years in Europe. Customers could use a card to tap shelf tags in stores to buy an item, and their purchases would be deducted automatically from their connected accounts in an app.

Now, Ahold Delhaize is removing the need to tap shelf tags with its grab-and-go technology. Referring to the new locations as frictionless, the company allows customers to scan a debit card to enter the stores. Then, customers can pick out the items they want, while the tech automatically detects their purchases to deduct the amounts from their card at the end. The company uses a combination of sensors and cameras to track things.

“Inside the store, artificial intelligence detects which products are being removed from shelves and body skeletal tracking connects the right products to the right shopper. Services such as PayPal, Venmo, Apple Pay and Google Pay are integrated into the wallet,” Ahold Delhaize said.

Amazon Go has a similar cashierless store model that allows people to pick the items they want from the shelves without checking out at the end. However, unlike Amazon Go, Ahold Delhaize does not require users to register or force them to use an app.

“The payment system was developed with American tech startup AiFi and Dutch bank ING. Payment takes place automatically as customers exit the store. Customers do not have to register in advance or download an app,” Ahold Delhaize said.

The AH To Go store at Schiphol Airport is on a two-month trial and sells similar products to what you usually find at an Amazon Go location. AH To Go has convenience items, such as sandwiches and salads that busy travelers can grab before or after their flights.

Unlike Amazon Go, the AH To Go store at the airport has a modular design that is easy to transport. The 150-square-foot building was moved on a tractor-trailer to the site and is part of the company’s experiment to see how modular stores perform. Ahold Delhaize has plans to expand its cashierless model to other locations.