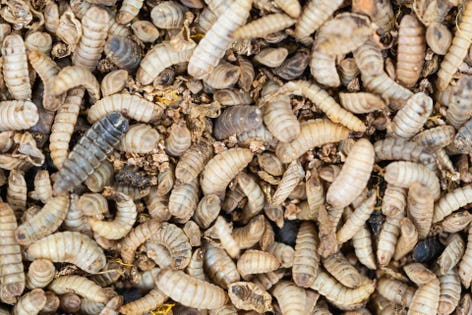 Black soldier flies (Hermetia illucens) are not much to look at, but they are making major waves in the aquaculture industry. These superstar larvae are disrupting the fish feed status quo by providing a protein-packed, inexpensive and high-quality alternative to the otherwise unsustainable feeds on the market.

Aquaculture production has more than doubled in the past 15 years, making it imperative that sustainable methods are used to feed farmed fish. Carnivorous fish, such as salmon and tuna, depend on diets of fishmeal and fish oil usually sourced from wild fish stocks. Fisheries that turn wild fish into fishmeal and fish oil (FMFO) are referred to as ‘reduction fisheries’. Approximately 20% of the total wild catch worldwide is processed into FMFO for aquaculture. These fish are not being caught for direct consumption. Instead, they are being extracted, processed and fed back to farmed fish.

Reduction fisheries remove many species lower in the food chain like anchovies, mackerel, sardines and krill that would otherwise be available to wild carnivorous species as a primary food source. Increased pressure placed on wild fish to sustain farmed fish is dreadful for wild fish stocks that are quickly dwindling. The species that reduction fisheries target happen to be the very ones that make up the base of the entire marine food web. By using less wild fish for FMFO and more sustainable options, the future for aquaculture is bright. This is where black soldier flies come in.

Fish farmers were not the first to discover the magic of the black soldier fly. They have been used in compost, waste disposal and exotic animal feeds for decades. These unassuming little powerhouses have an extremely high protein content, fast growth rate, and will feast on just about anything, including human waste and cadavers.

Slender, jet-black bodies no bigger than a piece of macaroni, and two sturdy-looking antennae make up the insect’s ensemble. With wings tucked back they resemble wasps, yet do not sting or bite and are otherwise harmless despite their unnervingly loud buzzing.

Females lay several hundred eggs at once, and a 4-day incubation period is all that is required for the fat, juicy larvae to wriggle out and begin their lives munching on organic matter, garbage and dung. For a short 14 days, these chubby segmented larvae will eat with a voracious appetite and build up fat stores that will sustain them for the remainder of their adult lives. The flies are often found in or near decaying matter and organic waste, where the larvae feast and the adults lay their eggs.

Aquaculture scientists are pioneering research with optimistic results. Trout and salmon raised on a black soldier fly diet grow just as fast as those raised on a traditional fishmeal diet, and the swapped out feed has no negative effects on humans that eat the fish. In fact, black soldier fly larva are edible to humans too. Two hurdles facing the burgeoning industry are scalability and regulatory roadblocks. Further research and government approval are on the horizon as technology improves. By replacing fish feed and fish oil with black soldier fly larva, farmers are changing the process by which they use wild fish to feed farmed fish, thus eliminating reliance on wild stocks. In effect, they are revolutionizing the aquaculture industry.