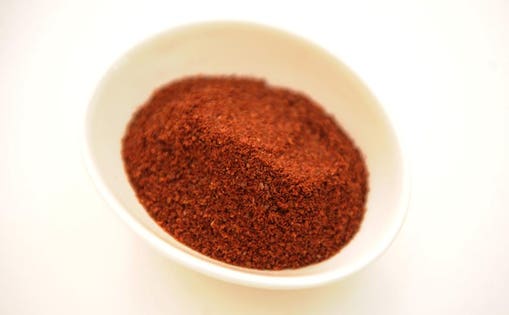 Diners’ growing interest in Middle Eastern food has prompted some of its flavors to cross into the mainstream.

Think of how often you now encounter tahini, and the way za’atar is appearing as an ingredient in everything from pastries to pizza.

In 2020, sumac could be next to make the leap. The venerable spice is showing up on vegetables, in appetizers and main courses, both in Mediterranean focused restaurants and elsewhere.

To be honest, when I was growing up, sumac was something we avoided. My Girl Scout troop was taught to keep a wide berth from poison sumac, a shrub whose pointy leaves emitted a toxic oil.

But sumac, the spice, is definitely not the same thing. It comes from the berries of a wild bush that grows throughout warm places like Sicily, southern Italy and Middle Eastern countries.

The berries are dried, and then crushed to make a deep reddish spice. Depending on the process, the spice can be a fine powder, or something more like flakes.

I first encountered it in 2016 at Sofra Bakery & Cafe in Cambridge, Mass. I took home a small jar and began experimenting with it on vegetables, fish and chicken.

I liked its tangy citrus flavor and found it an interesting accent that was a nice change from more familiar tastes such as rosemary and tarragon.

Ever since then, I’ve been purchasing it from local shops in the Detroit area, which has a significant Middle Eastern population.

I’ve found a nice selection at Hashem Roastery & Market in Dearborn, Mich., which can be ordered online.

I was delighted to learn that cookbook author Molly Stevens is also a fan. Her latest cookbook, All About Dinner: Simple Meals, Expert Advice has a wonderful recipe for roasted carrots with sumac, pistachios and yogurt lime drizzle.

It was the hit of a special dinner this fall at Zingerman’s Roadhouse in Ann Arbor, Mich., featuring recipes from the cookbook. I immediately went home and replicated it.

Earlier this year, one of the first dishes I ate at one of Chicago’s hottest new restaurants featured sumac.

Zachary Engel, the James Beard Award winning chef, and a FORBES 30 Under 30 honoree, serves it on hummus, with tahini, mint and lots of olive oil, at Galit, which has opened to rave reviews.

If you’d like to try cooking with it, Christopher Kimball’s Milk Street has a recipe for Sumac Spiced Chicken, which originates in Palestine.

You’ll find a list of do’s and don’ts for sumac at Spiceography. One suggestion that might appeal this winter: use sumac as a flavoring for tea.

And when brunch time rolls around, use it to top a Bloody Mary or some tomato juice.

It’s easy to get bored cooking and dining on the same dishes, so try some sumac to liven things up.