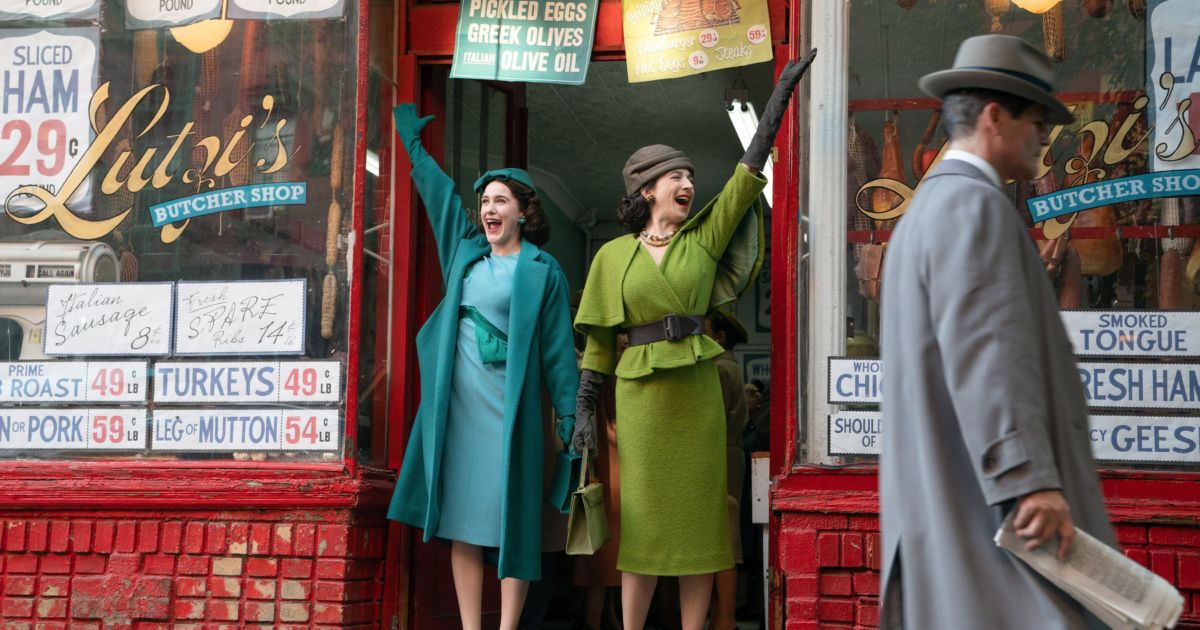 Marvelous Mrs. Maisel, the hit show from Amazon Prime Video, not only fueled nostalgia for 1950s New York City, it brought us to vintage Paris streets and summers in the Catskills. Now, with the premier of season 3, The Marvelous Mrs. Maisel is taking her show on the road. Want to follow along? Here are some of the key locations you can visit right now from the Maisel universe.

For her first comedy set, Mrs. Maisel drunkenly stumbles into the cellar of a West Village comedy club and speakeasy she frequented with her philandering husband. And though there was a bar called The Gaslight in the Meat Packing district which recently closed after 21 years, the Gaslight Cafe at 116 MacDougal St. was shuttered in 1971. An underground home for creativity of all types, it hosted the likes of Jack Kerouac and Bob Dylan, who recorded a live album there in 1962. The interior shots were filmed inside a studio in Brooklyn, but you can visit the exteriors at 97 St Mark’s Place in the East Village.

This Flatiron gem, Joel Maisel’s favorite hangout, is one of the oldest bars in the city and serves one heck of a cheeseburger to boot. If the prohibition-era marble-topped bar could talk, it might decide to take the fifth, but the vintage restrooms kind of say it all. An eclectic crowd of tried and true New Yorkers mingle with tourists and everyone enjoys watching the waiters serving food delivered on the dumbwaiter. See it at 45 E. 18th St.

The Upper West Side is Midge’s playground, and her parents’ opulent Manhattan apartment is filmed inside The Strathmore at 404 Riverside Drive, Apt 3N, overlooking the Hudson River. The building itself dates to 1909, is constructed of brick, limestone and terra cotta, and is located in Morningside Heights, closer to Columbia University (where Marion’s father, Abe, teaches) than the Museum of Natural History.

When Midge decides to make her own cash so she can spend nights killing it on the mic, she gets a job at this classic, now defunct, department store. The original, landmarked, building still stands nearly unchanged at 65 Fifth Avenue, though it’s now the Graduate Center for the City University of New York. Pop around the corner to the 34th St. entrance to witness the show’s exact shot, but sadly, you won’t be able to purchase any lipstick. The inside scenes were shot inside the Williamsburg Art & Historical Center, a former bank in Brooklyn.

When Mrs. Maisel and her father hoof it to Paris to convince Rose Weissman to come back to New York, they take a family meal in this sweet bistro at 13 rue de Charonne, Bastille in the eleventh arrondissement. The romantic, turn-of-the-century décor and checkered tablecloths highlight the classic French menu, like the perfectly cooked steak au poivre, gratin dauphinois, and of course the steak tartar – which sadly goes uneaten in the scene.

After wandering the City of Lights, Midge stumbles into this drag cabaret, which is exactly what it is in real life. Located at 75bis rue des Martyrs, 18th arrondissement, Madame Arthur has hosted bohemian luminaries such as Pablo Picasso and Toulouse-Lautrec and now presents upscale drag shows in two different theaters every night. After the cabarets, the space turns into a club which stays open until 6am.

Back from Paris and ready for some relaxation, the Weissmans and the Maisels head to the Catskills — with manager Susie not far behind. Just a few hours drive from Manhattan, this New York State mountain range was labeled the Borscht Belt and hosted a certain pair of dirty dancers back in the day. Scott’s Family Resort, on Oquaga Lake, stood in for Steiner Resort and still offers access to the same summer cottages, ballroom and even bowling alley that the gang frolicked in onscreen. Plunger and romper not included.

When Susie is kidnapped for cash by two mobsters, they drag her kicking and kind of screaming to the Rockaways, a NYC beach area in Queens known for its surfing, tacos and cheap beer. Of course, everything turns out OK on the subway ride, once the goons realize Susie also grew up there. You can follow in their footsteps by catching the A, J or Z trains to Rockaway Boulevard, or hopping on a NYC Ferry to Rockaway Landing.

When Midge starts dating the handsome bachelor, Benjamin, she is sucked into the New York art scene when they visit this dive bar. Known for its weekly salon for artists, The Cedar Tavern moved twice since it opened in 1866 and shuttered for good in 2006. The scene was actually filmed in McSorley’s, a similarly old-timey bar at 15 E 7th St. near University Place. Here you can toss peanut shells on the floor and order sloppily poured mugs of just two types of beer, light and dark. Sadly, if this were really where the two lovebirds came to mingle, they would never have mad it inside – McSorley’s didn’t allow women until 1970.

We haven’t had a ton of spoilers for season 3, but we do know that Susie and Midge head to Miami and have the pleasure of staying at the horseshoe-shaped Fountainebleau. A beachfront resort built in 1954 with a massive pool, Versailles-like gardens and swinging scene, it was luxury incarnate and favored by celebrities like Frank Sinatra, Lucille Bal, Judy Garland and even Elvis, and still enjoys a retro, sherbet-colored vibe today. Its Mid-Beach location has become more popular with the opening of other high-end resorts like the Soho Beach House and The Confidante.

Other than the occasional crumb dropped by producers on Instagram, we don’t know much about the locations in Vegas, but we do know This Is Us star Sterling K. Brown joins the crew as a straight-talking manager and we do see some marquees mocked up with Maisel. Other than that, you’re just going to have to tune in on December 6th to find out if what happens in Vegas…well, you know the rest.