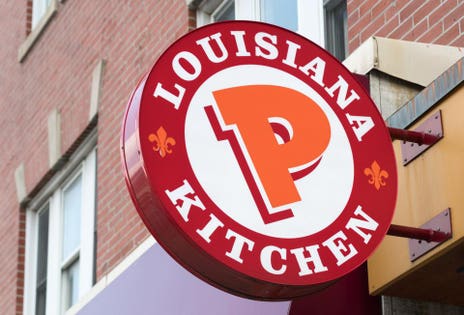 We all know about the huge lines and the eventual sellout that Popeyes experienced last summer, when it originally introduced its fried chicken sandwich.

But, how has Popeyes traffic performed since it came back? In a word: impressive.

Its report on Popeyes’ traffic, due to be published on Monday, shows that Popeyes’ customer visits soared even higher when the sandwich returned on Nov. 4.

On that Sunday, traffic rose 266.6 percent, compared with its normal daily traffic for a two-year period from November, 2017, through November 2019.

I was among those customers, and I continued to spot long lines at my local Popeyes throughout that week and the following weekend.

Many analysts predicted that the traffic would settle down after a little while, especially given the Thanksgiving holiday period, a time for eating leftovers.

Instead, the data from Placer.ai shows visits stayed strong all month — enough to more than double Popeyes’ usual traffic for November, compared with that two-year average.

Even on the Friday after Thanksgiving, visits to Popeyes locations rose 51.8 percent, the Placer.ai data showed.

There was also a positive effect for Chick-Fil-A, the fast food powerhouse in fried chicken, and maker of the sandwich that inspired the Fried Chicken Sandwich Wars.

Placer.ai data showed a 2.2 percent increase in November traffic at Chick-fil-A, compared with its two-year average.

And while the gain was far smaller than Popeyes, those figures reversed a two-year trend of lower sales.

McDonald’s is trying out a crispy sandwich, while Taco Bell is seeing if customers like crispy tortilla chicken, available as nuggets and in a taco.

But given those November numbers, it’s safe to declare that Popeyes’ fried chicken sandwich is a big hit, in reruns.