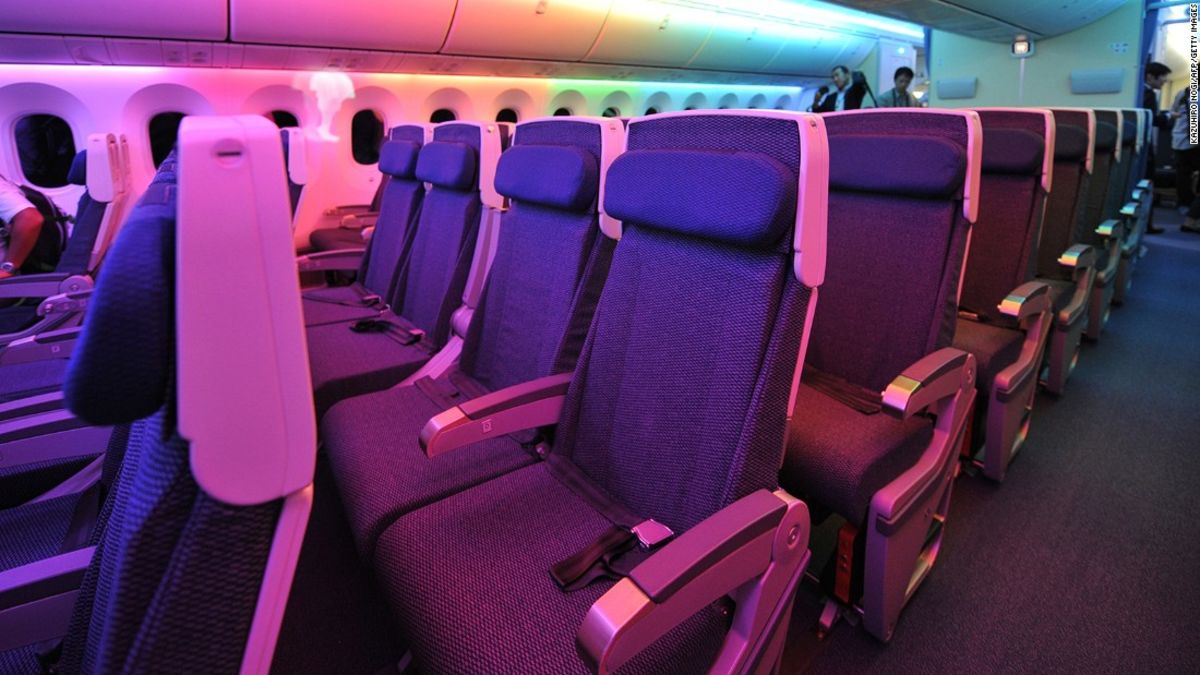 (CNN) — Full disclosure: I am not a tiny, magical elf (h/t CNN reader Aimee), nor am I six feet tall, but Geoff from Durham, North Carolina already guessed that.

I am, however, not short as Dave from NYC hedged in his response to the recent CNN Travel debate on the seat recline. In fact, I am 5 feet, 8 inches and 128 pounds on a good day — tall enough that when the person in front of me reclines, my knees take a direct hit.

But I am typically able to adjust myself — butt scooched back, legs not straight but to the right and left of the space in front of me — so as not to be bothered by the recliner sitting in front of me.

In spite of reading hundreds of your reader responses admonishing recliners like me, I am still in favor of it.

That said, enough of you wrote thoughtfully about your stance — and the debate was pretty split, with a whole lot of you preferring to take it up with the airlines — that the next time I find myself on a flight, bus or train, I will assess the situation before relaxing back.

Is the person behind me 6′ 4″ like Bryan in St. Louis, who wrote how uncomfortable he is when the person in front of him reclines, pushing their seat and body weight into his knees?

Is the person behind me hyperfocused on their laptop screen, or is there a fresh drink I might be toppling by reclining with no warning?

As with most everything in life, there are three sides to this story. Many of you believe it’s a cut and dry subject: Reclining is rude. Therefore, you’re a jerk if you do it, regardless of your seat’s recline functionality.

Hundreds more wrote in support of the seat recline because of the discomfort of sitting upright, the sheer option to be able to do so, the fact that you paid for the seat and can do what you wish with it for the duration of the flight.

Many wrote to say we got it all wrong: The issue isn’t whether or not reclining is justified or completely unacceptable. The issue is with airline greed.

Read on for more on this hot topic.

No, not that DNR. Many of you expressed your opinion plain and simple. “Do not Recline!” Ted from Chicago, who is 6′ 4″, cried. Minah from Minnesota admits to being angered when the person in front of her reclines, and Darcy from Canada says if you’re sitting in economy, it’s rude to recline.

Jim from Evanston, Illionois, takes it up a notch: “I don’t recline, and frankly, I judge people who do.”

“I still cannot fathom anyone who decides to recline on an airplane. What you’re doing is saying that you don’t care at all about the comfort of the person behind you,” says Allison from Washington, DC.

But Paula thinks something is missing in the conversation: body type.

“I am a 5’9″ woman with some extra pounds (like most of the traveling public). When the person in front of me reclines, I lose the ability to use my laptop – even on my lap. It simply can’t be open enough to see the screen as I need to or even type effectively. If I have paid for WiFi to work, I am shut out. Yes, I can recline too, but I want/need to work while you ‘relax’.”

How is this even a question?

A lot of people are confused as to how we even made this a topic up for debate.

“With the option available, the debate is fruitless. Remove the option of recline by restricting seats and there is no debate,” wrote reader Michael.

Andy from Michigan thinks the debate is stupid. “People should be able to sleep if they want or need to on flights without having their head and neck snapping back and forth, like it will when you doze off fully upright. The seats are able to recline for a reason.” He thinks people who have a problem with reclining should buy the seat in front of them too — it’s the only way to control the situation, he says.

Josh from Portland goes with the “your seat, your choice” argument: “When you purchase an airline ticket, you purchase the entire space the seat can occupy. The space behind your seat where it reclines belongs to you, just as the space beneath your seat belongs to the person sitting behind you, and they are welcome to stretch their legs out into that under-seat space if their knees are too close to the back of your seat.”

M Raymond from Oregon agrees with Josh: “Yes, if you pay for your own seat, then the decision as to whether you recline or not is completely yours.” Many respondents fall in this line of thinking. Your money, your seat, your option to recline.

Matt from NYC comes out in favor of the recline as well, and Andre is not at all confused about where he stands: “I recline the [expletive] out of the seat.”

People on both sides cited pain as a problem with reclining — and not reclining.

Pain was cited by people on either side of the argument. A lot of folks in favor of reclining offered details on neck and back issues and the need to recline for comfort. Others, of course, made it clear how much pain is caused when people recline.

At least 50 responses were from people over six feet who complained of knee pain when the seat in front of them dips back. Marek has taken to bringing knee pads with him when he travels because he is 6′ 4″ and “if you recline into me, my knees will be in your seat the entire flight,” and he will be in pain. The pads help mitigate the discomfort.

Jane argues on behalf of her tall spouse: “I have a husband who is 6′ 4″ and have watched him get smushed when others recline.”

But Gavin from New Jersey says he needs to recline for the sake of his comfort and well-being: “I have four herniated discs in my back, two in my neck. I need to recline so that there would be less stress on my neck during flight.”

Jordan’s shoulder injury has made him an avid recliner. And Vivian says: “I recline every chance I get, and it’s not just for comfort. If I sit upright, I get motion sickness and I could throw up. “

But what’s the answer when you pit Vivian’s motion sickness against Elizabeth’s feeling of claustrophobia? “It is incredibly uncomfortable for the passenger seated behind a recliner. It’s hard to get and out of the seat, you can’t eat your food, and sometimes the entertainment screen is hard to see.”

Reclining is dependent on flight time and other factors, so say many of the readers who responded to our debate question.

Some people, like Kenneth, who is a wheels up, seat back kind of passenger, recline every chance they get.

But not everyone agrees with this philosophy. A decent number of readers have strict self-imposed guidelines on reclining.

Take Kate from California, who says: “I treat planes like concerts. At concerts, if the folks in front of me are standing, I’ll stand, too. If not, I’ll remain seated. On planes, if the person in front of me reclines, I’ll recline, too. Otherwise, I’ll keep the peace and stay upright.”

Then there’s Alex from Santa Cruz: “It’s simple: Do not recline on flights lasting less than three hours.” And Kip: “Reclining your seat on a domestic flight in the economy section of an airplane is just plain rude.”

Denise from Monterey, California, is more or less in agreement: “It is not okay to recline on domestic flights. When possible, planes should be designed to limit (or eliminate) the amount the person in front of you can recline. But, I feel it is okay to recline on long overnight international flights. You have to find some way to sleep on long hauls!”

Meanwhile, Dan in Queens offers the following instruction: “Recline slightly but be considerate of other passengers.”

Sometimes, there’s more than one factor at play in making the decision as JR from Washington, DC, explains: “I typically look behind my seat to assess the size of the passenger. If they are 6′ 5″ like myself, I try to remain courteous and avoid reclining. My knees already touch the seat in front of me, and I don’t enjoy losing any more space. That being said, it’s difficult to not recline to some degree on a 15-hour flight.”

Indeed, the decision to recline is dependent on how long the flight is for readers MaryAnn, Lyn and several others.

We shouldn’t be at each other’s throats about this though, many of you insisted. It’s not about reclining or remaining upright. It’s not about whether the seats can be reclined or whether one person’s sleep ought to be prioritized over another’s work; it’s about airlines taking away precious space in economy seating.

Peter from Las Vegas has directed his ire accordingly: “Instead of getting mad at passengers for using the seat’s recline function to, well, recline, we should be getting mad at the airlines for making it so uncomfortable in coach in the first place. If the seats recline, there should be room for everyone to recline without ‘infringing’ on the personal space of others.”

Mark would have to agree: “The real debate should be whether or not it is ethical for airlines to continue to squeeze passengers into smaller spaces and nickel and dime them at every turn.”

As the distance between seats has diminished over time, space is at a premium, but that’s neither the recliner nor the reclinee’s (if you will) fault. Shane points a finger at the airlines: “The fault lies with the airlines, who force both parties to fight over this space in their ongoing attempts at wringing every last penny out of potential revenue.” He admits to reclining sometimes but always feels bad when he does.

Becky urges us not to “make this about the reclining passenger when it is the airline that is limiting the space for people.”

Finally, Curt would like to take the opportunity to remind everyone that “the airlines are not our friends.”