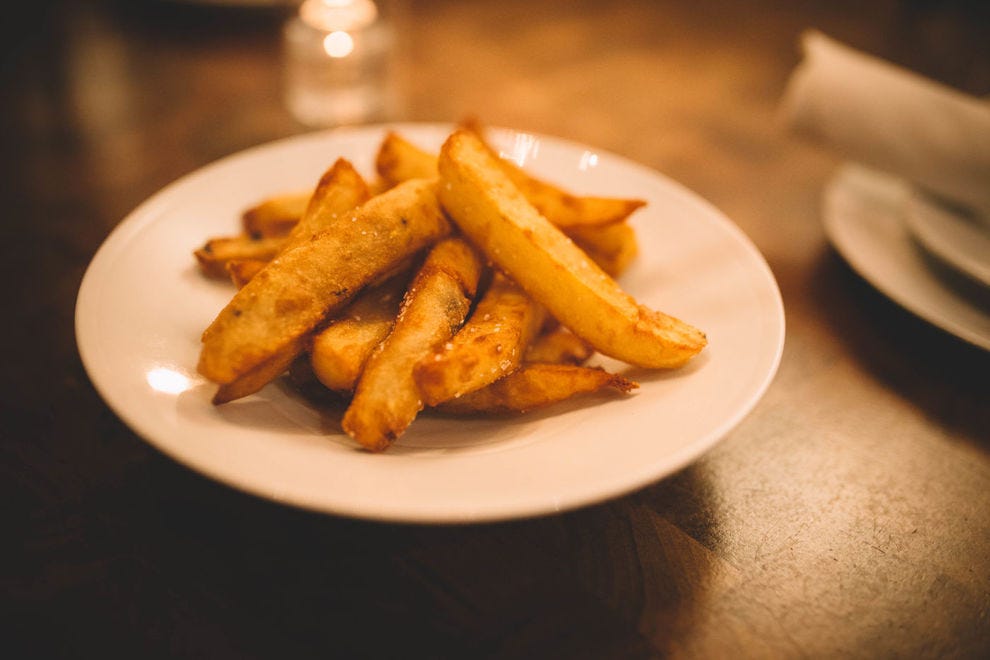 In a world of instant gratification, three days to make a french fry may seem unfathomable, but to chef Avishar Barua of Service Bar in Columbus, Ohio, it’s simply a labor of love.

That’s because at Service Bar, the fries aren’t just an accoutrement of the burger. They’re a customer favorite due to an intricate production consisting of brining, drying, freezing and frying the 3/4 by 3/4 cuts of russet potato over three days.

“The perfect fry is super crunchy on the outside but soft on the inside,” states Barua. “If the fries aren’t perfect, why bother ordering them?”

Long before his career as a chef, Avishar Barua was just a young boy with a surprisingly inconsistent appetite. A first-generation Bangladeshi immigrant, he remembers his parents using fast food as a special treat to encourage Barua to eat.

“I didn’t like a lot of things growing up,” Barua tells me, remembering back to the age of five. “But I could eat four tacos at Taco Bell and at McDonald’s, I got the kids’ meals just for the toys.”

As Barua matured, so did his taste buds, moving onto the likes of fish sandwiches, which he stuffed with french fries. “Asian families are interesting,” he laughs, “We love fish sandwiches at fast food restaurants. But I had to add iceberg lettuce to mine and shove my fries in it so I could eat everything at once.”

That memory of fries is one of Barua’s first. As for his first memory of cooking? “It involves almost burning my apartment down,” Barua shares. “I realized in college, I couldn’t live off ramen noodles, so I went to the library for cookbooks. I liked the idea of making my own food and realized by the end of college, I had more cookbooks than medical books.”

After graduating with a dual degree in biology and psychology, Barua continued his education in a new field as a chef. Although he was initially accepted into the Culinary Institute of America, Barua chose to begin his culinary journey with an apprenticeship in Ohio. 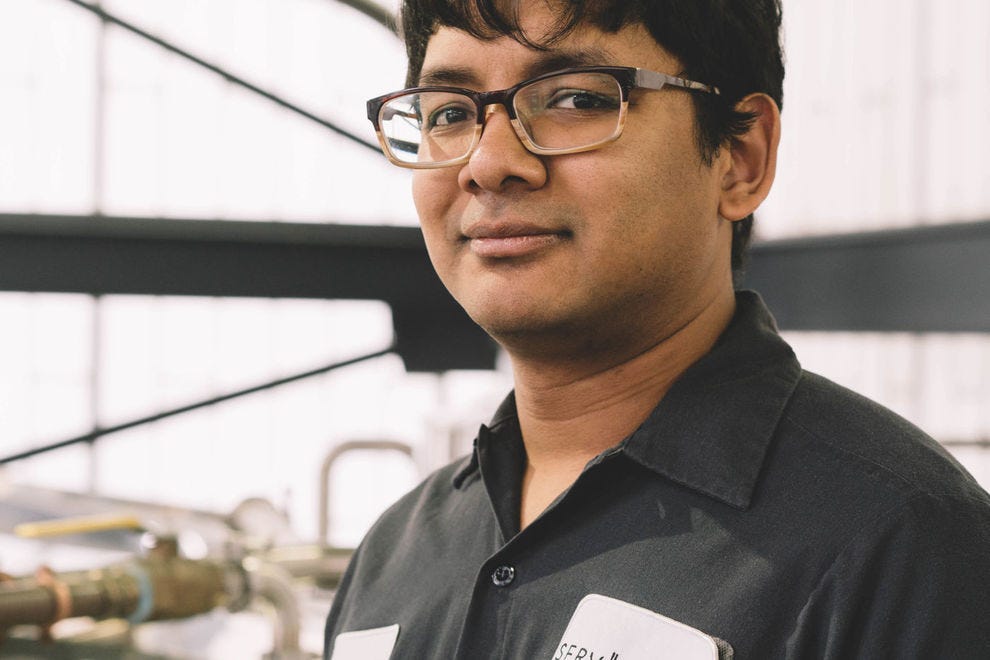 “I’ve always been a hands-on person,” he shares on the 6,000 hours of restaurant work required to pass the degree. “By the time I’d graduated the apprenticeship, I’d experienced every station.”

In 2017, Barua opened Service Bar – a 97-seat restaurant repurposed from a former bar – as part of Middle West Spirits. It’s here where Barua made a name for himself with dishes like cheesy brisket crunch, lamb wontons and their burger, all inspired by his early days of fast food indulgence, which of course also gave way to his famed french fries.

So what exactly does the fry process encompass?

“Cutting the potatoes alone takes about a day of labor,” says Barua, explaining that the restaurant shuts down on Tuesdays in order to cut up four cases, about 240 potatoes. Prior to a custom fry die being designed for the restaurant, the cutting was done by hand.

Next up, the excess starch is removed by submerging the potatoes in a cold water bath, followed by a brine of glucose, salt, baking soda and water. This is done in a Combi oven and can take up to an hour and 45 minutes.

“The glucose helps maintain the flavor of the potato,” explains Barua. “Because we are cooking them in water, we can lose the natural sugars. The baking soda turns the pH slightly basic, which is an environment that will both help maintain structure (think about alkaline noodles like ramen and how they are able to hold their springiness) and also allow for better browning in the following frying sessions.”

The team then removes the cuts from the 194°F heat, one at a time, and dries them on a wire rack, before placing them in a walk-in cooler to air-dry overnight. “We have to work fast and get them laid out with space between each fry before they begin to cool, otherwise they steam and get mushy,” Barua adds, noting that they can only fit about 36 pieces of potato on a rack at any given time. 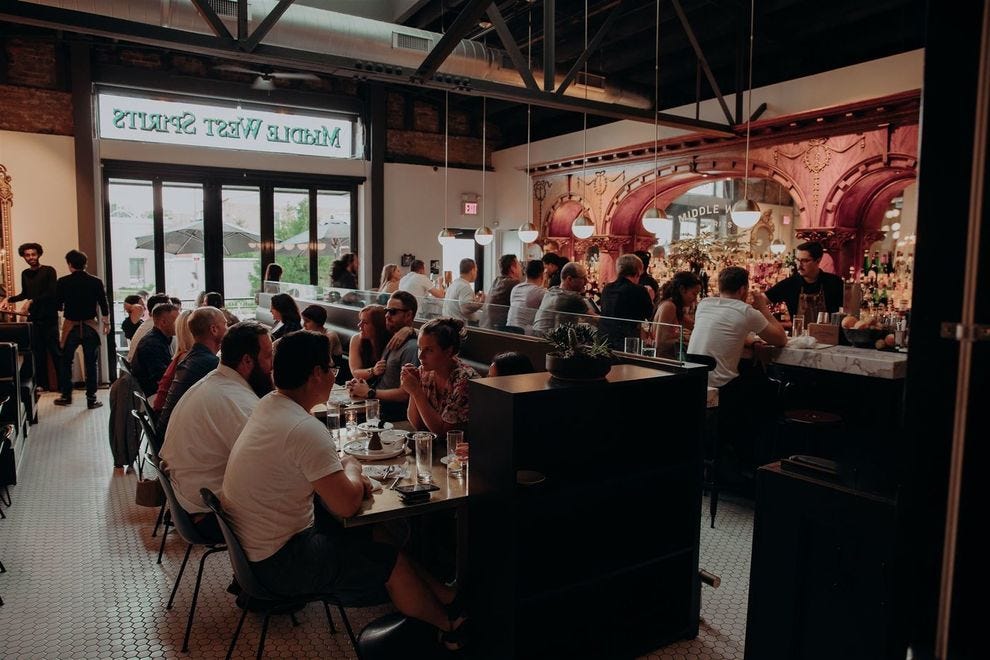 On the second day of production, the potatoes are fried in a grape seed and canola oil blend for 68.5 minutes at 266°F. ‘The neutral oil imparts no flavor,” Baura clarifies.

Once removed from the oil, the fries are yet again dried and drained on a wire rack before entering the freezer; first until the fries are frozen solid, then chamber sealed in a vacuum bag. “They need to freeze through, so that when they thaw the interior is slightly mushy,” says Barua.

On day three, when the fries are made to order, they’re placed directly from the freezer into the 375°F fryer for two and a half minutes. “The aim of this last fry is to build as much crust as possible; they look like they’re burning on the outside, but they’re still fluffy on the inside.” 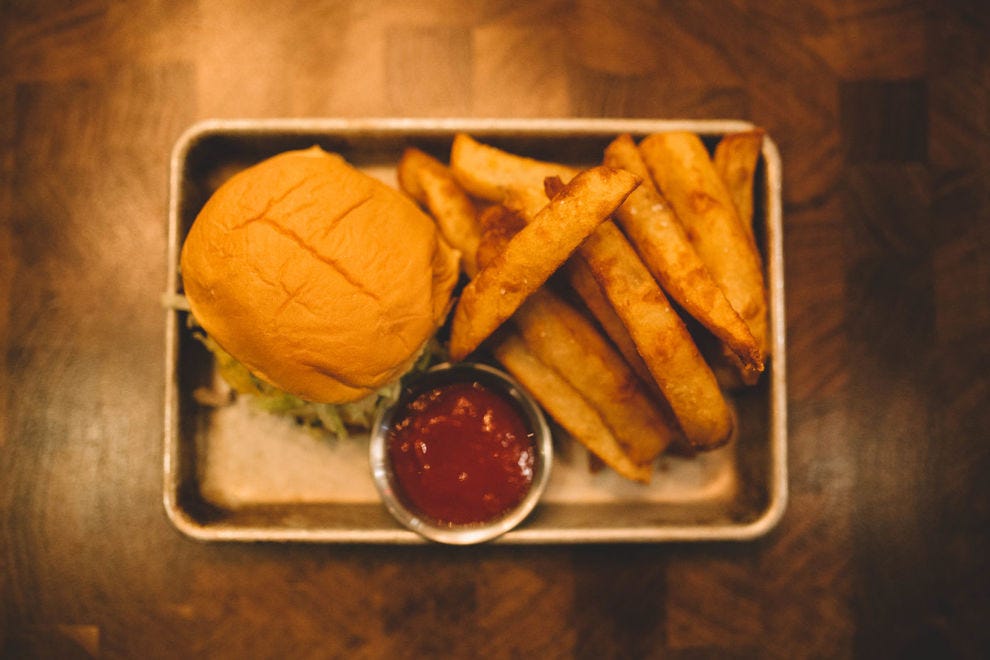 To finish, the team sprinkles “just a touch” of coarse salt atop the approximately pound of potatoes served alongside the Service Bar burger, with Barua explaining, “We don’t need to add much [salt] since they are seasoned from the inside out via the brine.”

Due to the amount of labor required to create these fries, it’s all about quality versus quantity; they are only sold with the burger (on Sundays you can get a burger, fries and shot of bourbon for $18).

“We want people to enjoy them at their best. If they’re not the best, there’s no point in doing it,” says Barua.

As he continues to create the perfect fry, Barua contributes to the development of Columbus’ culinary scene with Asian dishes now taking the spotlight on local menus.

When I ask if he feels responsible for the movement over the past five years, Barua simply concludes, “I don’t know if I’m a leader, I’m just part of the process of the next generation, getting people to express their personalities throughout Columbus.”