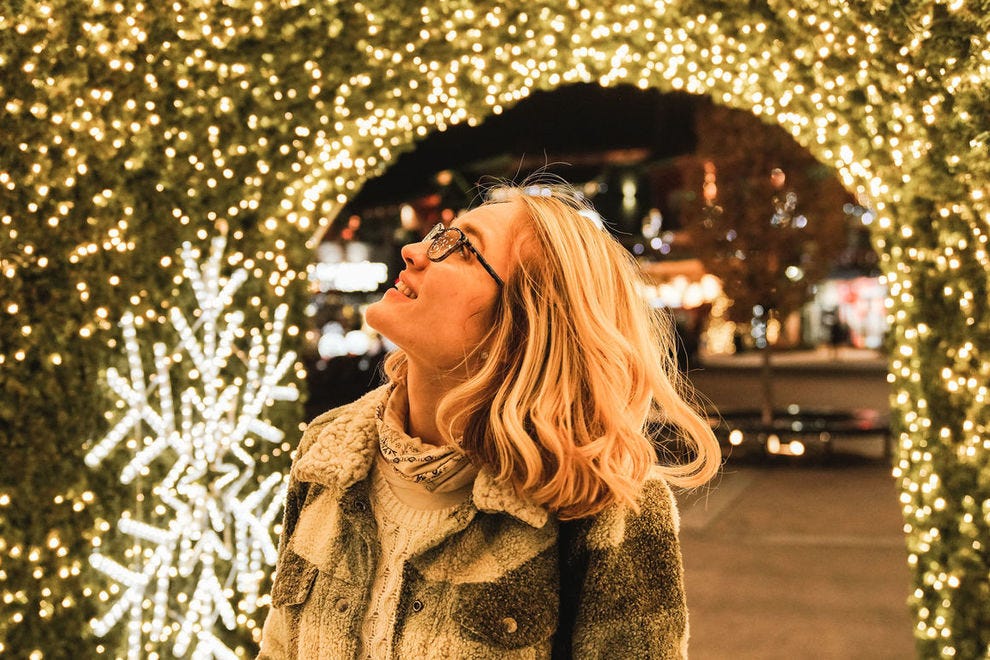 For people like me who love a feel-good, holiday film that’s heavy on escapism, Hallmark Christmas movies provide you the chance to delve into your childhood holiday fantasies. Innocent romance under the mistletoe is a pretty much guaranteed part of every one of these movies.

Another essential part is the beautiful, Christmasy town that looks and feels nearly enchanted with the holiday spirit. These real-life filming locations for some of the most beloved made-for-TV holiday movies are likely to inspire you to sing a tune other than “I’ll Be Home for Christmas” next season. 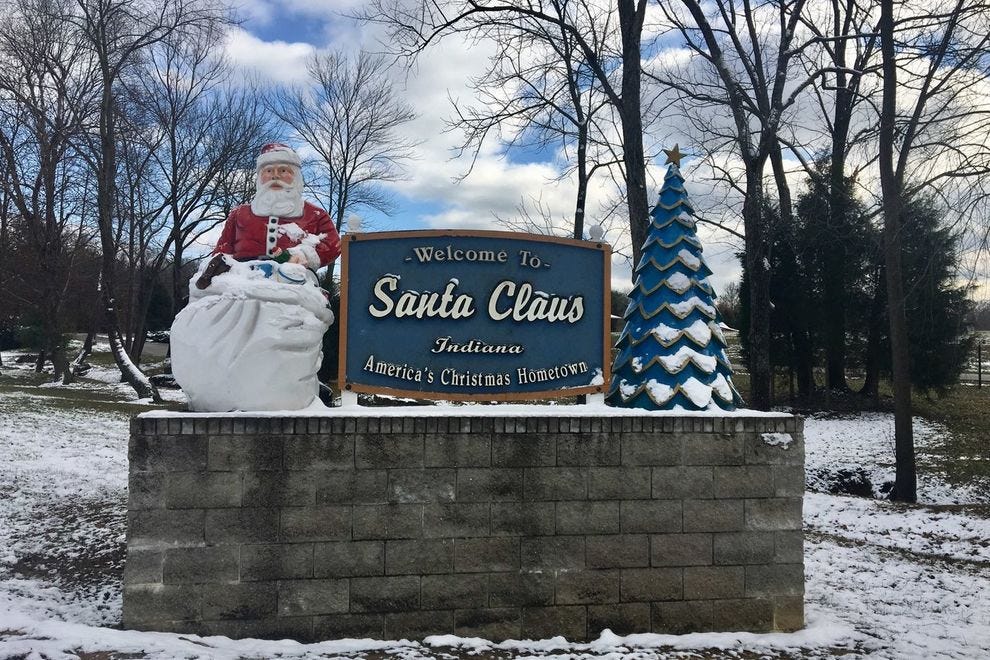 If you want to immerse yourself in the town where “Snowed-Inn Christmas” was filmed, go to the very holiday-friendly town of Santa Claus, Indiana. The 2017 Hallmark movie starred Bethany Joy Lenz and Andrew W. Walker as journalists with seemingly nothing in common until they’re stuck in the small town of Santa Claus.

What’s cool about Santa Claus is that it didn’t need a Hallmark makeover to be that resplendent at the holidays. The town is nicknamed “America’s Christmas Hometown,” and its Santa Claus Museum & Village reveals its Christmas-centric history.

Visitors should check out its theme park called Holiday World and the Evergreen Boutique & Christmas Shop. Also, stop by the post office to mail your holiday cards because there’s a special Santa-themed postmark each year that’s unique to the town. 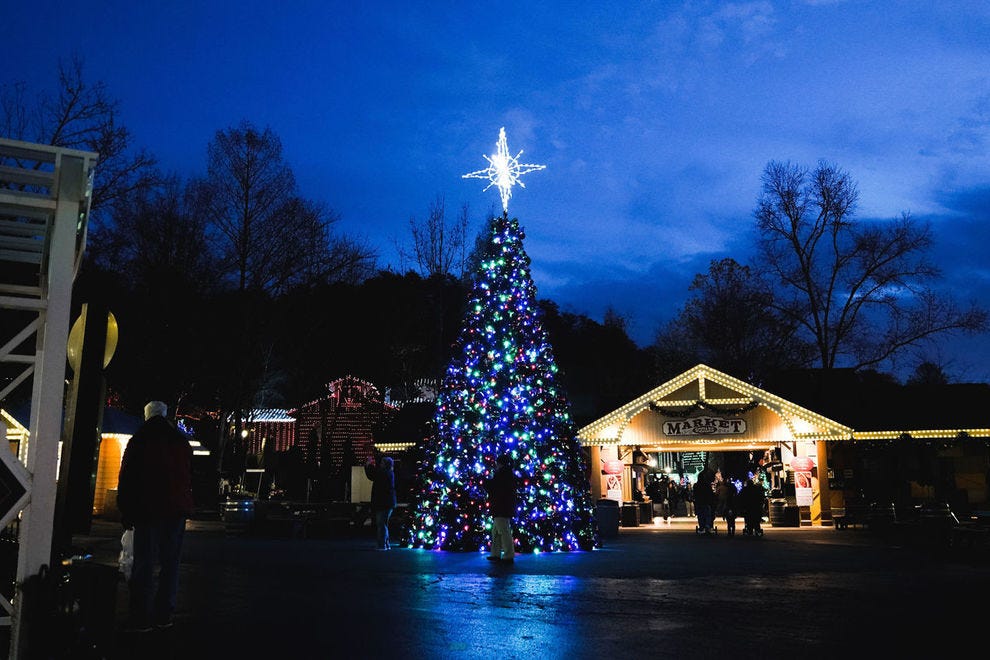 Dolly Parton is a beloved entertainer whose career has spanned decades, and she is a local hero in Pigeon Forge, Tennessee. She grew up in the Smoky Mountains, so she built her wildly successful theme park Dollywood here.

The 2019 Hallmark holiday movie “Christmas at Dollywood” is set at the theme park and around Pigeon Forge, and Dolly plays herself in a supporting role. The film shows off the town’s majestic natural beauty and jovial holiday celebrations.

Dollywood’s real-life Smoky Mountain Christmas Festival is a sight to behold, and the town of Pigeon Forge displays over five million lights in its annual Winterfest celebration. 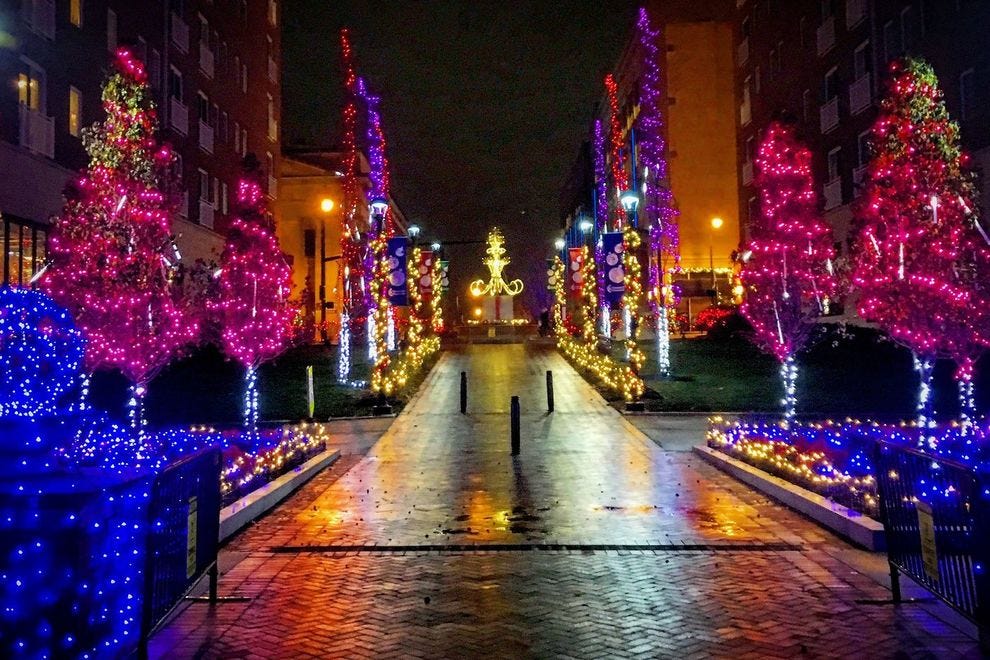 “The Country Christmas Album” is a fun, made-for-TV Ion Christmas film about a country singer who finds love with a pop star. It was filmed in Columbus, Ohio, a dynamic city that is a winter wonderland during the holiday season.

From the cascade of lights on the quaint streets of German Village to the Conservatory Aglow event at the Franklin Park Conservatory and Botanical Gardens, the city celebrates in a big way. In fact, Columbus City Adventures takes visitors on a holiday lights tour through the many light displays and twinkling winter landscape.

James Van Der Beek charmed viewers as Dawson in “Dawson’s Creek” and more recently in “Dancing with the Stars,” but he is beloved by Hallmark fans for his starring turn in “Debbie Macomber’s Mrs. Miracle.”

This sweet tale of a single dad who finds love was filmed in Fort Langley, British Columbia in 2009. A decade later, the appeal of Fort Langley has only grown, while its history has been preserved.

The Fort Langley National Historic Site of Canada hosts Christmas festivities every year, and it can also be seen in other Hallmark holiday movies such as “Christmas Homecoming” and “Trading Christmas.” 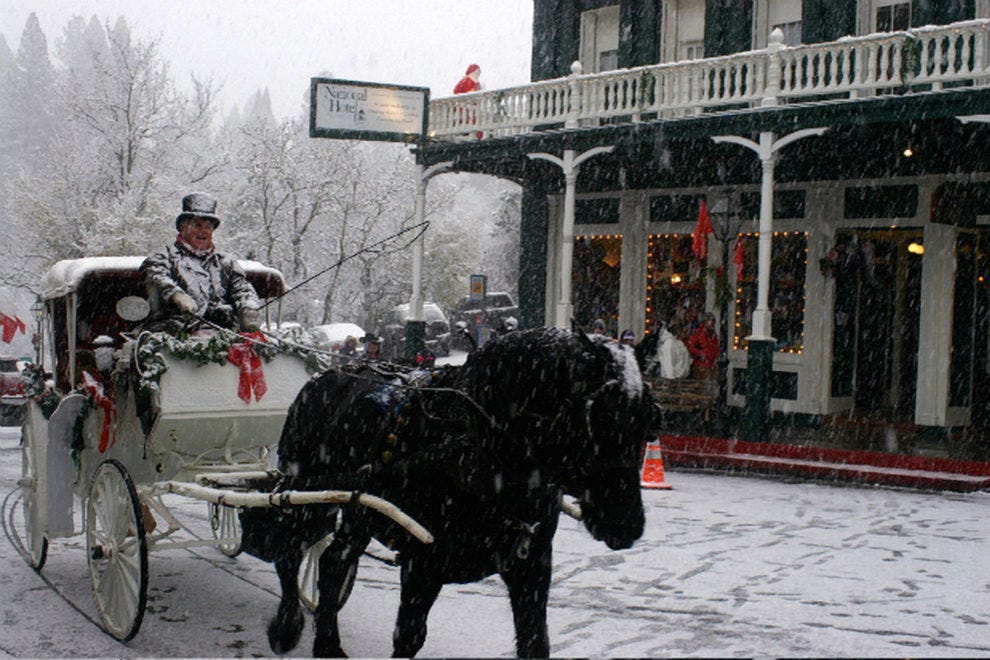 “The Christmas Card” is a 2006 Hallmark holiday movie that has become very popular among viewers for the last decade and a half. The film tells the story of a young soldier who is so touched by a Christmas card he received from a woman in Nevada City that he decides to come see the town for himself.

Romance ensues, but the town remains a central part of the film. The real-life Nevada City is as charming as it appears on film, and it has a Victorian-style Christmas celebration every year where you can see carolers dressed in period clothing and stroll among towering pines while savoring roasted chestnuts. 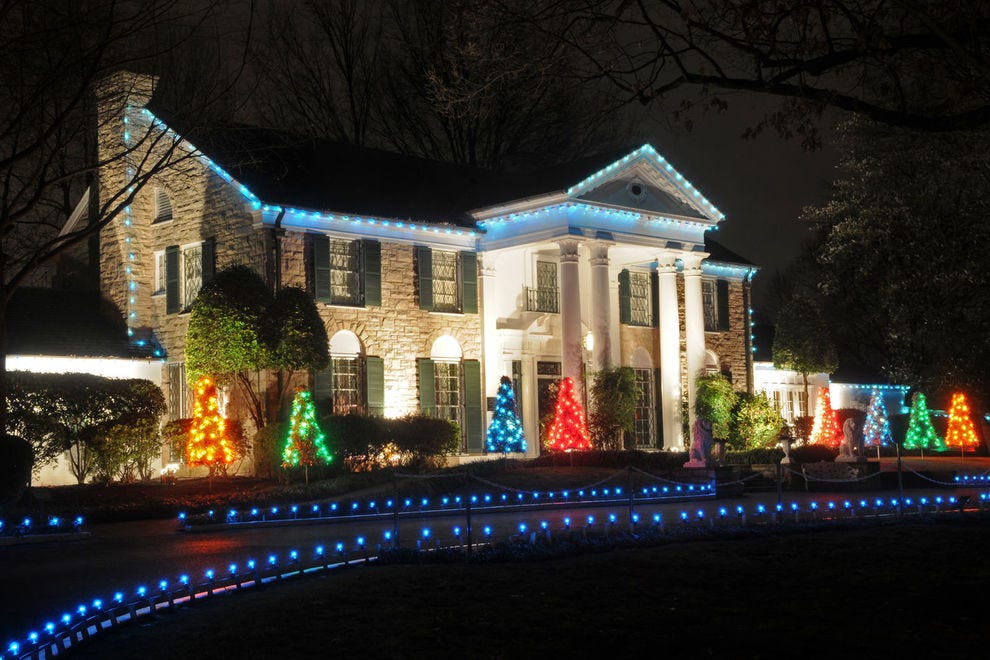 “Christmas at Graceland” was a special Hallmark holiday flick that was set in Memphis, Tennessee. As its title implies, the focus was on the beloved former home of Elvis Presley that has turned into one of the world’s greatest tourist attractions. Of course, there’s much more to Memphis, and the heroine in the movie discovers the charms of the City of Blues.

Located along the Mississippi River in southwest Tennessee, Memphis has holiday celebrations galore throughout the season. Visitors shouldn’t miss the music on Beale Street or the eye-opening National Civil Rights Museum. For tasty seasonal treats, stop by the city’s beloved Imagine Vegan Cafe. 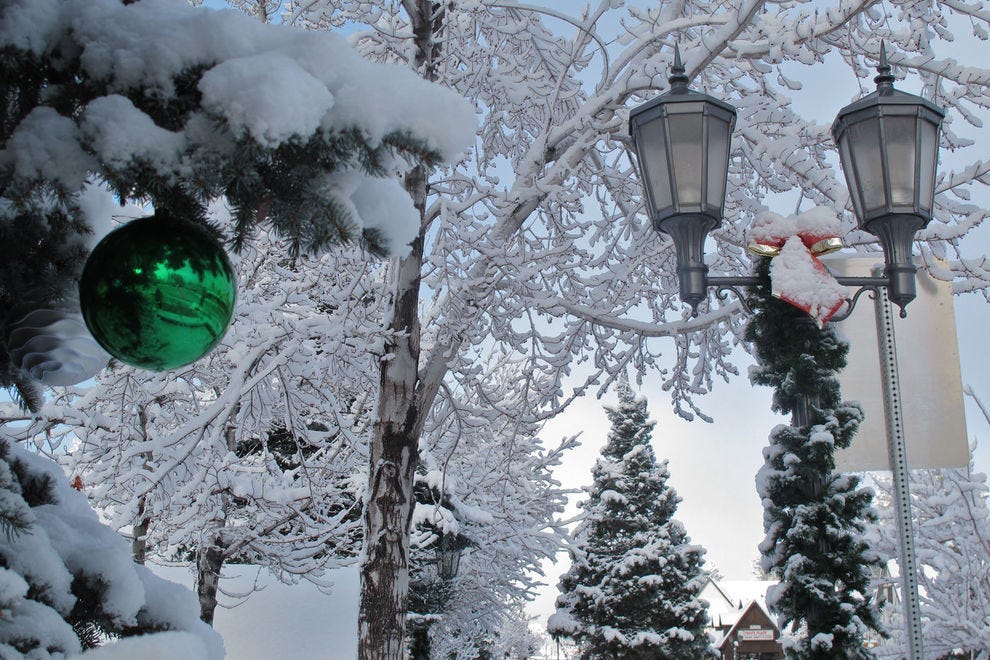 As a four-season mountain lake escape that’s only a couple of hours from Los Angeles, Big Bear Lake becomes a winter wonderland every holiday season. The 2013 Hallmark holiday movie “Snow Bride” was filmed here, and the movie showcases its scenic beauty.

The town celebrates yuletide cheer with offerings such as “Sail with Santa” boat excursions and spectacular holiday light displays.

Maureen McCormick, who is beloved for her portrayal of Marcia Brady and has recently made a splash in “A Very Brady Renovation,” plays a central character in the movie “Christmas Land.” The lovely town of Farmington, Utah is also a central part of the film.

The 2015 Hallmark holiday film’s Christmas Land is actually a decorated version of the Pioneer Village in Lagoon Park in Farmington. In real life, the park closes for the season, but the city of Farmington is all decked out for the holidays. Its 3-D light show is especially popular.

“Christmas Everlasting” is an inspiring 2018 Hallmark Christmas movie, and many of its scenic shots were filmed in Mansfield, Georgia.

The town’s lovely covered bridge and historic church were among the parts of town used in the film, according to Country Living. In real life, Mansfield is quite small but lovely, with a population of under 500 people. Set at the southern tip of the Appalachian Mountains, the scenery is stunning, especially during the snowy winter months.

Chester, Vermont is the type of holiday town that will make you feel like you really are in a Hallmark movie. It’s no wonder so many of its local businesses were used in the 2008 Hallmark holiday movie “Moonlight & Mistletoe.” Candace Cameron Bure has gone on to be a Hallmark powerhouse, starring in many holiday films for the network – but this one is special.

She portrays a businesswoman who is none too thrilled to be back in a small town, but like any Hallmark heroine, she has a change of heart. If you visit Chester, it’s easy to see why. The town goes all out for the holidays each year. Don’t miss the Hugging Bear Inn & Shoppe and the Fullerton Inn which are featured prominently in the movie.