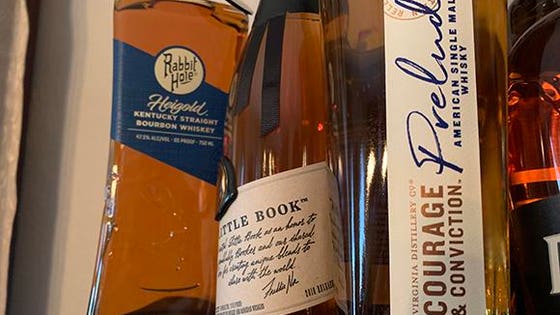 I submit that whiskey is the ultimate holiday gift of all time. For the enthusiast, a unique bottle is always a special treat providing a level of joy non-whiskey people don’t understand. Mash bills, char levels, aging, blending, and filtration methods are only a few of the dizzying factors dissected by whiskey wonks, so an unexplored bottle for a real fan is a can’t miss show of affection. Chances are the casual tippler is equally grateful to have something they might not buy themselves. At the very least they’ll have a cool whiskey looking sharp on the home bar. As for friends who don’t partake? Even better. Now you know there will be something to drink the next time you visit.

To find a perfect holiday house warmer, here is a hit list of nine unique North American whiskeys created in as many styles. From cask strength “wheaters” to “in-bottle” finished rye, these whiskeys envelop a massive range of aromas and flavors for some fine sipping.

Blender Freddie “Little Book” Noe Jr. must have felt like a kid-in-a-candy-store as he plumbed Jim Beam’s Small Batch Collection stocks to strike upon Little Book Chapter o3: The Road Home. The third Little Book release is a cask strength combo of well-aged Knob Creek, Basil Hayden, Booker’s, and Baker’s bourbons. The result is an explosion of classic caramel and vanilla flavors, backed with spicy rye, and served up at 122.6 proof, so a little splash of water goes a long way. $125

It’s easy to support a company comprised of war heroes. Horse Soldier is owned by the Green Berets chosen to be the first of the Army Special Forces to enter Afghanistan after 9/11. The movie 12 Strong depicts one of their team’s missions. Horse Soldier is based in St. Petersburg, Florida, but the company distills its bourbon in a co-op in Ohio. The Horse Soldier portfolio contains a straight bourbon and a small batch expression that just scored double-gold at the San Francisco Spirits World Spirits Competition. But it’s the wheat recipe bourbon that blows me away. Big, cask strength and non-chill filtered, this bourbon is loaded with caramel and vanilla and drinks a little too easily for its 108-116 proof. $70

Oak & Eden is a fun and interesting company that curates their whiskey from various distilleries to create flavor profiles through a technique called “in-bottle” finishing. A 5″ charred American Oak spire is placed inside each bottle, which subtly changes the flavor of the whiskey as you work your way through. Rahr & Sons beer finished bourbon and rye, Cabernet steeped bourbon, and Caribbean rum-soaked rye are a few of seven expressions, all of which are 2-years-old and bottled at 90 proof. I am partial to Rye & Spire, a snappy rye spiked with a heavily charred oak spire that contributes smoke and leather to the whiskey’s fruity and grain forward flavors. $40

Beautifully packaged Heaven’s Door 26-Year-Old Canadian Whisky is the first offering from Bob Dylan’s whiskey company’s Bootleg Series. What we have is a 26-year-old whiskey bottled at a solid 111.5 proof and finished in Japanese Mizunara oak, a notoriously tough barrel to acquire. The high corn, low rye mash bill accounts for the whiskey retaining its sweetness despite its years, but a dose of oak is also prevalent. Despite the top-notch presentation and rare whiskey within, this one-and-done collectible is a splurge, but for Bob Dylan obsessed whisky fans, it may well be the coolest gift on the planet. $500

Uncle Nearest has only been around for a couple of years, but their formula of sourcing choice, charcoal mellowed Tennessee whiskey is getting buzz, and for a good reason. Uncle Nearest 1856 is aged 8-11 years, then charcoal filtered, as Tennessee whiskey tends to be. This Uncle Nearest has a high corn recipe that imparts a grassy nose and a creamy sweetness mingled with caramel, maple, and a bit of char. Bottled at 100-proof, 1856 is one of three Uncle Nearest expressions, which includes a small batch and an 11-year-old single barrel. $60

Baker’s Bourbon has gotten a facelift. The most cultish member of Jim Beam’s Small Batch Collection, which includes Booker’s, Basil Hayden, and Knob Creek, has been rebranded as a single barrel offering. This move makes sense as it will undoubtedly wake up Baker’s brand while diversifying the portfolio by adding a full-time single barrel without the expense of launching a new product. Aside from being bottled from individual barrels instead of combined batches, Baker’s remains the same classic, delicious Kentucky bourbon made from a traditional mash bill, age stated seven years, and bottled at 107 proof. $60

Rabbit Hole has come a long way since 2012. The whiskey company completed a beautiful, cutting edge distillery in the heart of Louisville last year, where founder Kaveh Zamanian is pumping out a river of bourbon and rye in preparation for many years of future releases. But Rabbit Hole’s current four whiskey line-up includes a straight bourbon, straight rye, and a sherry cask finished bourbon. But my favorite is Heigold, the latest addition to the Rabbit Hole family. What sets this 3-4-year-old bourbon apart is it’s 25% malted rye mash bill. This high malted rye flavor grain brings a sweet, creamy corn and an oaky pop on the palate with a hint of cinnamon and a spicy, slightly menthol finish. I’d like to try one in an Old Fashioned. $70

The first drops of what will become Courage & Conviction has been released by Virginia Distillery Co., who have been bottling blends of American and Scotch single malts while the American Single Malt whiskey continues to mature. Prelude: Courage & Conviction is a limited sneak-peek at what’s on schedule to arrive in spring 2020, a Virginia-distilled single malt aged in bourbon, sherry, and cuvée wine casks. The latter adds big fruit to the familiar sherry and bourbon barrel influences of caramel, dried fruit, and brown sugar. $70

The Samurai Scientist straight rye is a 16-year-old single barrel rye that marks WhistlePig’s first Boss Hog released under the authority of master blender Pete Lynch. The limited-edition whiskey is born of a collaboration between WhistlePig and Japanese brewers from Kitaya, who provided 11-year-old umeshu barrels, a Japanese liqueur made from plumbs soaked in shochu and sugar, to finish the rye. The result is a a cinnamon maple nose with notes of ginger, vanilla, spices, and oak on the palate with a long smoky finish. The Boss Hog is bottled cask strength, clocking in between 120-122 proof. $500