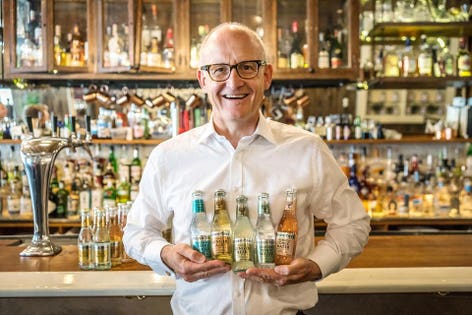 If Fever-Tree CEO Charles Gibb had his way, he’d get rid of every soda gun in every bar in every city, starting with New York.

“The main causes of health code violations across cities are syrup boxes,” Gibb says, explaining that syrup boxes, often in the basement of bars, are linked to soda guns upstairs. “When was the last time those lines were cleaned? Do you know how some bartenders mix ginger ale? They’ll mix Coke and Sprite, maybe add some ginger bitters or syrup.”

While his company, the high-end mixer Fever-Tree, which comes in a range of flavors from Mediterranean tonic to spicy ginger ale, would definitely benefit from bars ditching their soda guns, Gibb argues that every smart consumer should demand nothing less. (To get a sense of the Fever-Tree ethos, New Yorkers can stop by Bryant Park’s Porch, the brand’s first dedicated standalone bar, which opened last month.)

“I spent 27 years in the wine and spirits industry, and a lot of the time, I was frustrated because these delicious, stunning spirits created by master distillers and master blenders were destroyed before the consumers even got their drink,” Gibb says.

“Think about it: A master distiller will select their grains from the best they can find,” Gibb says, describing a typical distilling process. Around the world, spirits are carefully crafted by expert teams; liquid will sometimes rest in hand-selected barrels before ending up in a bottle. “Sometimes, [a master distiller] will even put their name on a gorgeous bottle. And then, in the last 30 seconds before you or I get to drink it, that spirit is completely destroyed by an injection of artificial ingredients.”

Gibb gestures towards his drink, Woodford Reserve bourbon topped with Fever-Tree ginger ale. “As much care, dedication and thought has gone into the creation of this mixer as went into the creation of that spirit,” he says. “I want people to realize that if they are spending all this money on this spirit, then they should make sure the mixer is as good.”

Fever-Tree, which uses natural ingredients, such as real ginger, is poised to benefit from bars taking more care with their drinks experience, especially when cocktails in high-end bars can cost around $16 or more.

Given the competitive nature of the bar world in New York and other cities, he argues that it makes sense for bars to step up by offering the Fever-Tree products.

“If you’re charging $16 for a cocktail, why shouldn’t the consumer be out there demanding a better mixer?” he says.